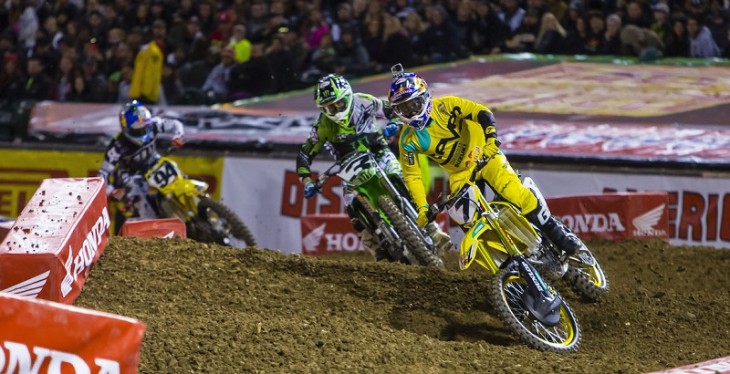 This is the third stadium to host Monster Energy Supercross’ annual visit to the Phoenix area. Tempe’s Sun Devil Stadium was the original venue, holding five races in ’86, ’87, ’91, ’97 and ’98.

The stadium features an innovative roll-in field that moves in and out of the stadium, allowing the natural-grass playing surface to grow under sunlight. As a result, this Saturday’s layout will take advantage of the ability to run the track outside the stadium.

The first 450SX Class race held in Phoenix was on May 10, 1986. Rick Johnson won on a Honda en route to capturing the championship.

Phoenix has been a popular city for first-time winners in recent years, with three riders claiming their inaugural victory over the last six seasons – Dungey (2010), Justin Barcia (2013) and Tomac (2015).

Jeremy McGrath won only once in Phoenix, the first race at Chase Field in 1999, in eight attempts.

The rider to win in Phoenix has gone on to win the 450SX Class title 13 times in 22 seasons. The last time it happened was 2014 with Ryan Villopoto.

Ricky Carmichael and James Stewart have the most Phoenix wins with four. Dungey and Ezra Lusk sit second with two wins apiece. They are the only four riders to earn multiple wins in the desert.

Carmichael won in 450SX Class at Phoenix on three different brands – Honda, Kawasaki and Suzuki. Stewart could do the same this weekend with Suzuki. He already has wins aboard a Kawasaki and Yamaha.

A rider has not won consecutive races in Phoenix since Stewart did so in ’08-’09. That was part of the only three-year winning streak in Phoenix history that started in 2007. He won four of five races from ’07-’11.

Riders to Win in Both Classes in Phoenix

Past Winners in Phoenix

Webb won the first race of his career in Phoenix last season. Since then he has won eight of his last 10 races.

Nathan Ramsey, James Stewart and Jake Weimer are the only riders to win multiple 250SX Class races in Phoenix. Webb can add his name to the list on Saturday.

The rider to win in Phoenix has gone on to win the Western Regional Championship the last two seasons and a total of nine times in 22 seasons.

In those 22 seasons, there have been 19 different 250SX Class winners in Phoenix.

Both Broc Hepler and Casey Lytle earned their one and only 250SX Class win in Phoenix.

Past Winners in Phoenix