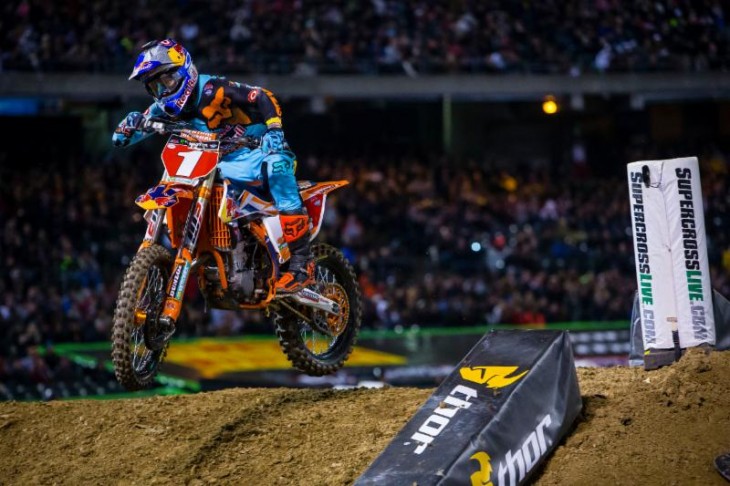 There will be multiple ways to watch Saturday’s Monster Energy Supercross race, besides the live broadcast on FS2 and the FOX Sports GO app. Please see below for all programming details, including primetime re-airs on FS1 on Sunday night and Monday night.

Some key insights to watch heading into this Saturday night’s race include:>

Last Saturday night inside O.co Coliseum in Oakland, California, Dungey enjoyed his most convincing effort to date, grabbing the SupercrossLive.com Holeshot Award and going on to lead all 20 laps of the 450SX Class Main Event. It was the first win for Dungey in Oakland and signified a landmark 25th career victory. He extended his points lead to 22 markers over Rockstar Energy Husqvarna Factory Racing’s Jason Anderson and Monster Energy 360fly/Chaparral/Yamaha Factory Racing’s Chad Reed, who currently sit tied for second. Moreover, Dungey extended his podium streak, which now sits at 20 races dating back to last season.

“To be able to get out front and find your lines early in the race is key,” said Dungey. “It’s great to see all of the hard work pay off. I am really happy for Marvin [Musquin], who is my teammate, for earning the first podium of his career. I train with him during the week, and tonight he proved he has the speed.”

“We are making steps in the right direction every weekend,” said Roczen. “There were some parts of the track tonight where I was doing well and others where I struggled.”

The battle behind Dungey in the 450SX Class standings is becoming increasingly close, with just seven points separating second from sixth. These riders have battled for a spot in the top five all season, with four of the five finishing on the podium at least once.

In the Western Regional 250SX Class, Webb appeared to be well on his way to a fourth straight victory to start the season after taking the lead on Lap 3. However, his bike lost power on Lap 12, allowing Savatgy to take over control of the race and win for the first time.

“To be on the podium and have the points lead going into our first-ever race in Glendale, Arizona next weekend is awesome,” said Savatgy.

Behind him, CycleTrader/Rock River Yamaha’s Colt Nichols also enjoyed a career highlight, finishing in the runner-up spot for his first-ever podium, and moving from sixth to fourth in the championship standings. GEICO Honda’s Christian Craig bounced back from crashing out of the lead earlier in the race to earn his second straight podium finish in third. He also won the first SupercrossLive.com Holeshot Award of his career.

“Honestly, I didn’t really get off to the greatest start,” said Nichols. “I made it kind of hard on myself. And then, after that, I put my head down and tried to pass as many people as I could. I saw a few people tip over, and we took advantage of that. It was just a really good ride for me. Once I kind of realized where I was at, it was probably the worst I’ve ridden in a while, and I was getting a little nervous out there. But, this has just been such a dream of mine for so long. So, to see it finally come true, it’s just a really big deal for me and the whole CycleTrader/Rock River Yamaha team. It’s such a good feeling, and I can’t wait for next weekend.”

Webb’s 21st-place finish erased the 18-point lead he had coming into Oakland and leaves him second in the standings behind Savatgy, who moved from third to first and will carry the red number plate for the first time with a two-point lead. Rockstar Energy Husqvarna Factory Racing’s Zach Osborne sits third, five points out of the lead.

First through fifth in the Western Regional 250SX Class Championship are separated by just 16 points, each rider with at least one podium finish this season.