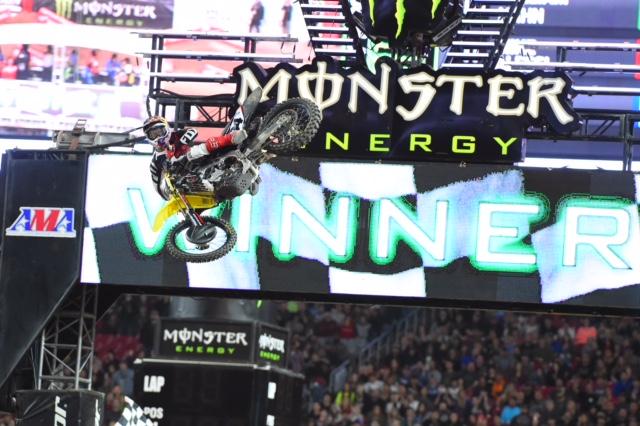 BTO Sports/WPS/KTM’s Davi Millsaps won his second SupercrossLive.com Holeshot Award before Roczen passed him for the lead on the opening lap. Monster Energy Kawasaki’s Eli Tomac, who started fourth, took over third place on the opening lap and advanced to second place on Lap 2, dropping Millsaps to third.

Team Honda HRC’s Cole Seely passed Millsaps for third on Lap 4. Dungey, who started in 10th place and positioned himself in the top five on Lap 3, moved around Seely for third on Lap 5 when the Honda rider stalled his bike. On Lap 15 Dungey passed Tomac for second, where he would eventually finish.

Roczen took the checkered flag over four seconds ahead of Dungey, while Tomac held on for third place.

Roczen now has five wins on his career, winning two each of his first two seasons in the 450SX Class. It was his first win since the second race in Anaheim in January of the 2015 season, 18 races ago. Roczen missed the final eight races of last season with injury.

“We have been working really hard and it paid off,” said Roczen. “This was a tough track tonight. We got the job done.”

Despite having his three-race win streak come to an end, Dungey’s podium streak dating back to last season when he won the 450SX Class title now sits at 21 races. That’s also the same points advantage he now holds over Roczen in the championship standings.

“I made some good, clean passes after that bad start,” said Dungey. “I made passes where I could and had a great race.”

In the Western Regional 250SX Class Main Event, GEICO Honda’s Jimmy DeCotis picked up his second SupercrossLive.com Holeshot Award of the year, leading his teammate Craig through the first turn. Craig made the pass for lead shortly thereafter. Defending Western Regional 250SX Class Champion Cooper Webb, who rides for the Yamalube/Star Racing Yamaha, started in seventh and made his way into the top three by the second lap and then moved into second place on Lap 3.

Points leader and last week’s winner Joey Savatgy put his Monster Energy/Pro Circuit/Kawasaki into third place on Lap 5 after starting eighth. On Lap 9 while attempting a pass for the lead, Webb crashed but did not lose any positions, remounting right in front of Savatgy.

“To come out of retirement and get my first win ever is amazing,” said Craig, who last raced full time in 2013. “On the last lap the crowd was so loud; it was awesome.”

“I didn’t get a great start so I was playing catch up,” said Webb. “Then I crashed and threw away any hopes of getting the win.”

Webb and Savatgy now share the points lead at 98. Craig moved into third place, 11 points out of the lead.

As a precursor to the live television, don’t forget to catch all of the pre-race coverage with Supercross Race Day Live presented by AMSOIL, which will stream on SupercrossLive.com from 12:50 p.m. – 4:30 p.m. local race time each Saturday during the season. Practice, qualifying, behind the scenes features, and key rider interviews will all be highlighted on the Supercross Race Day Live presented by AMSOIL webcast.