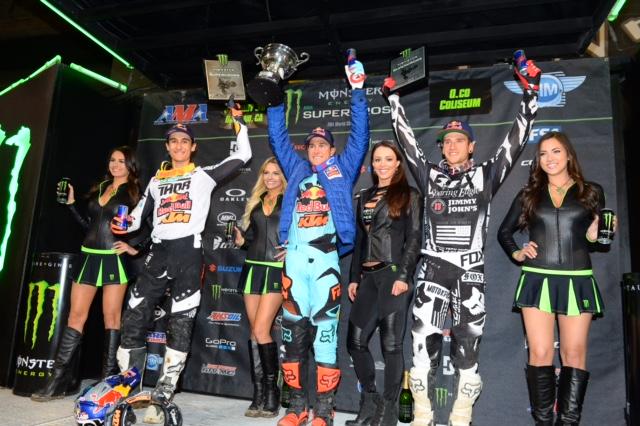 Dungey jumped out to an early lead in the 450SX Class main Event, winning the SupercrossLive.com Holeshot Award. His teammate Marvin Musquin followed in second place and Team Yoshimura Suzuki Factory Racing’s James Stewart, who was racing his first Main Event since the season opening race in Anaheim, in third place.

With the win, Dungey extended his points lead to 22.

“To be able to get out front and find your lines early in the race is key,” said Dungey. “It’s great to see all of the hard work pay off. I am really happy for Marvin [Musquin], who is my teammate, for earning the first podium of his career. I train with him during the week, and tonight he proved he has the speed.”
Roczen earned the best finish of his season with a second-place finish.

“We are making steps in the right direction every weekend,” said Roczen. “There were some parts of the track tonight where I was doing well and others where I struggled.”

On Lap eight, Martin crashed and Cycle Trader/Rockriver Yamaha’s Colt Nichols moved into the number three position. While leading on Lap 12, Webb had a mechanical issue that forced him to pull off the track. He did re-enter the race but finished in 21
st place.

“To be on the podium and have the points lead going into our first-ever race in Glendale, Arizona next weekend is awesome,” said Savatgy.

“I almost got choked up when I came of the track,” said Nichols. “I have been envisioning this my entire life, and to be up here is a dream come true.”