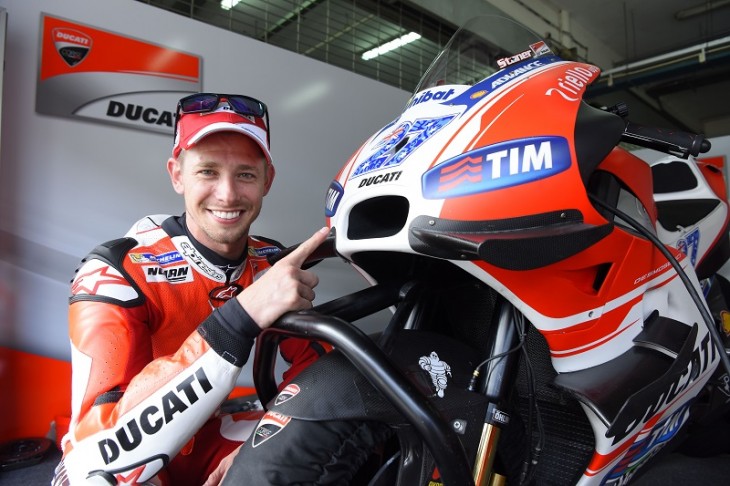 Casey Stoner returned to the track today on the Ducati Desmosedici GP of the Ducati Team at the Sepang International Circuit in Malaysia. It was a welcome return for the Australian rider, two-time MotoGP World Champion, who had not ridden a Ducati since the Valencia round in 2010. Stoner completed a total of 54 laps on the 2015 model Desmosedici GP machine, setting a best time of 2m02.1s on his final run late in the afternoon.

Michele Pirro also went out on track this morning, but just for a few laps. The Italian rider tested a 2016-spec Desmosedici GP bike fully equipped with instruments and sensors and also carried out a fuel consumption test.

Both Ducati test-riders will be back on track tomorrow for the last day of private testing, before the official IRTA test that runs thru February 1-3.

Casey Stoner (Ducati Desmosedici GP #27)
“It’s been a really good experience today with the Ducati Team. I wasn’t too sure what to expect but everybody has been fantastic, welcoming me and working with me to try and get the best out of myself and this bike. I need some time to get back to speed and get the feeling back, because I haven’t ridden a MotoGP bike for one year and any bike at all for six months. It was a very productive first day, we got comfortable with the bike and the tyres a lot more quickly than I thought I would. We’ve got a lot of things to test and get myself a little bit more acquainted with the bike but generally I’m very happy. The Desmosedici GP has a lot of potential, hopefully we can give the right input and help the two Andreas to try and achieve something great this year. I’m pretty happy and surprised with my lap time to be honest, hopefully the next day we can be a bit more comfortable after sleeping on it. It’s been fantastic working with Gabriele (Conti) again and with Marco (Palmerini) and Gigi (Dall’Igna): everyone has been really professional. So far, so good!”

Michele Pirro (Ducati Desmosedici GP #51)
“Today I only did a few laps because the schedule only included a test of electronic components followed by one for fuel economy, so once I had finished my work, the team concentrated on Casey’s debut. Tomorrow we’ll do a few more things before the first of the three days of official tests that get underway on Monday. The feeling is good and even on Wednesday we managed to do a good job. I am sure that we can get some good results, and having tested both Iannone’s and Dovizioso’s bikes I feel confident, despite the fact that the track conditions here are not very good.”