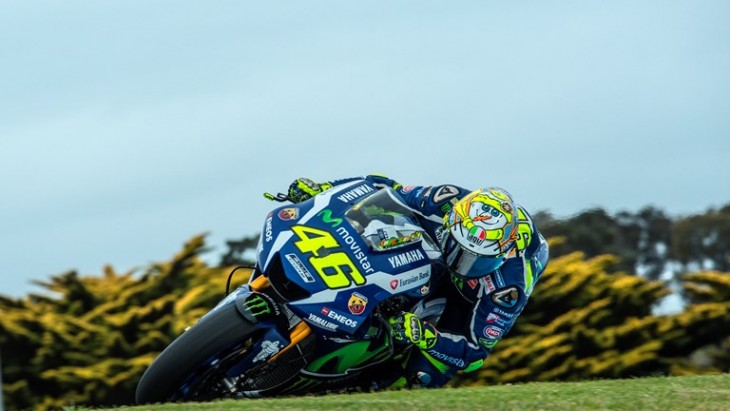 Today the Movistar Yamaha MotoGP team wrapped up the second Official MotoGP Test of the 2016 season at the Phillip Island circuit. Jorge Lorenzo and Valentino Rossi have spent the last three days battling the elements whilst working through a number of new materials and finished fourth and sixth respectively in the combined timesheets.

Movistar Yamaha MotoGP team’s Valentino Rossi and Jorge Lorenzo set the fifth and ninth fastest time during the third day of testing in Australia. This last opportunity was one of the more challenging outings for the riders as they focused on making a decision as to which YZR-M1 model they would like to continue to develop – the one more similar to the 2015 model or the alternative edition.

Rossi was the last rider to head out on track, but he was quick to catch up with the other riders by pushing during long stints and moving up to fourth place before the weather once again put a halt to testing. He was able to pick up the pace further later in the afternoon when the rain subsided and set a total of 56 laps. His best lap of 1’29.435s secured him fifth in today’s ranking order, just 0.277s off today’s quickest time. His fastest time of the weekend, a 1’29.404s, puts him in sixth position in the combined standings, just 0.273s from first.

Teammate Lorenzo was also eager to work down his testing checklist and was one of the first riders to leave pit lane to make the most of the dry conditions in the morning. Determined to give his engineer as much data as possible to base the next steps on, he completed a total 41 laps and set a fastest time of 1’29.760s. Despite a small crash later in the afternoon, which left him unhurt but saw him end the day early, he took ninth place, 0.602s from the front. His best lap overall of 1’29.357s has him placed fourth in the combined time sheets, 0.226s from the lead.

The team will now head back to Europe whilst the engineers return to Japan to process the data and further prepare the 2016 YZR-M1 for the start of the season.

The Movistar Yamaha MotoGP team will regroup in Qatar for the final pre-season test on March 2nd, a little more than two weeks ahead of the opening round, also in Losail.

“Overall we can be quite satisfied with the work we have done, if you take into account the little amount of testing time that was available over these last three days. The only glitch was Jorge’s crash, most likely due to the cold conditions. Though we had some mixed weather and again weren’t able to put in many laps, we completed most of the work that we had planned for this test. We came here with the imperative to decide on which bike we would start the season with. When the track dried in the afternoon we were able to make a comparison between the two models and chose accordingly. We are confident we will be ready for more testing in Qatar in a two weeks’ time.”

“Unfortunately also today the conditions were not fantastic. In the end we only had one good day and that was yesterday, but it’s better than nothing. Today we continued our job for a bit, especially we compared the two different bikes and I think we will use the bike that’s more similar to last year’s model. It was a positive test, especially yesterday, but also today. I feel good with the bike and with the tyres and my pace was not so bad, so I’m quite satisfied.”

“We didn’t have a lot of time to test in the morning and I did the lap time I set this morning on a rear tyre that already had done 24 laps. I’ve been riding with old tyres all day because we only had one more new tyre. When we finally got a dry track and time to try that last new rear tyre to set a decent lap time, Laverty crashed and I had to cancel that lap. I then decided to try a race simulation, but I crashed on the first lap because the track was very cold. There were a lot of crashes during this time of the day. I was very dedicated and braked a little bit too hard for the grip of the front tyre and I crashed, so I ended the test and I’m going home. Sepang, for us, has been an unbelievable test. Here things changed completely because the lay-out of the track is the opposite. Let’s see what happens in Qatar.”

Confidence high for Tech3 pair after constructive 3 days in Australia

The Monster Yamaha Tech3 Team pairing of Pol Espargaro and Bradley Smith concluded the test in Phillip Island positively having made some encouraging steps forward after another committed performance on the final day despite the intermittent rain. The inconsistent weather limited the track time, yet the Tech3 duo powered through and continued to collect valuable data for the upcoming 2016 MotoGP season, with the next outing being the last pre-season test at Qatar on Wednesday 2nd March.

Pol Espargaro carried on pushing today as he aimed to increase his knowledge about the new standard ECU in order to further refine his base setup. In fact, the young Spaniard’s best time, which left him only 0.587 from the top in the combined standings, saw him improve by nearly half a second compared to yesterday, while the fastest time of the test couldn’t be beaten throughout the day. On the other side of the Monster Yamaha Tech3 Team garage Bradley Smith produced a spirited display and confidently completed 45 laps, despite falling midway through the day, although he was not injured. Smith finished in 16th, yet his time from yesterday places him in 13th overall, but only six tenths of a second from third, leaving him fully optimistic for the next test.

“Altogether, I’m pleased with how the test went. Of course, we hoped for better weather here in Australia, but considering that the forecast for today was even worse than it actually was, we have to be happy with what we achieved. We were able to try a lot of things and to be honest I’m very satisfied with the rhythm that we managed to run. Also, my fastest lap time was decent so after the difficult test that we had in Sepang, we are now back to where we want and need to be. For sure, it goes without saying that we still need to collect a lot of information so that we can fine tune the electronics in a better way as it is still quite new to us, but I believe we are already working in a good direction. Also our tyre knowledge is very limited at the moment and especially today when the track temperature was colder, you could see that everybody was struggling a bit more. Yet, we will have to face these conditions in the season, so there are still many things to learn. The only inconvenience of today was my crash. When I left the pit box, I didn’t feel confident with the tyres so I came back in and we decided to use another set. As a result, I was still checking the behaviour of the bike when Jorge passed me. I believe he put four seconds between us, but then closed the gas in the first corner, so by corner two I was already with him and had to take a wider line to give him enough space and as soon as I touched the brake on the dirty part of the track, I lost the bike. It’s a pity, but I’m fine and the team did a great job to repair the bike so that we could still take good advantage of the day and now I can leave Australia feeling much more confident than I was a few days ago.”

“We did a good job here in the past three days, although there are obvious signs that we have to do a bit more. I was a bit unlucky today because I did the famous turn 4 crash. This corner was beneficial for me in 2014 in the race when I got my podium but not today unfortunately! The good news is that I don’t have too much pain or any serious injuries and when I remounted, I was able to ride quite comfortably. Aside from this, it was a positive day, although it was a shame about the cold weather and the rain in the middle of the day, which affected our front tyre choice. Yet, we still got through our testing programme so I feel confident enough to say that we have a really solid base setting as we go into the final three days of testing at Qatar. There, we need to reconfirm a few things that we tried here. The Phillip Island track is quite specific and the grip is also high, but Losail is very different and the grip levels are much lower. Therefore, it will be necessary to check everything that we discovered here in Australia. I am happy to say that the electronics are really positive at the moment and the team and I are doing a solid job in understanding that. There are still some areas that we need to work on, specifically with the acceleration, but that’s the same for everyone I think. I am satisfied with what we accomplished here, but we need to push harder next time because 16th is not enough for us and for our sponsors. Having said that, I don’t think the results matter too much at the moment, it’s when the season starts that it counts, so I look forward to carrying on the positive work in Qatar as we inch closer to the first race of the year.”