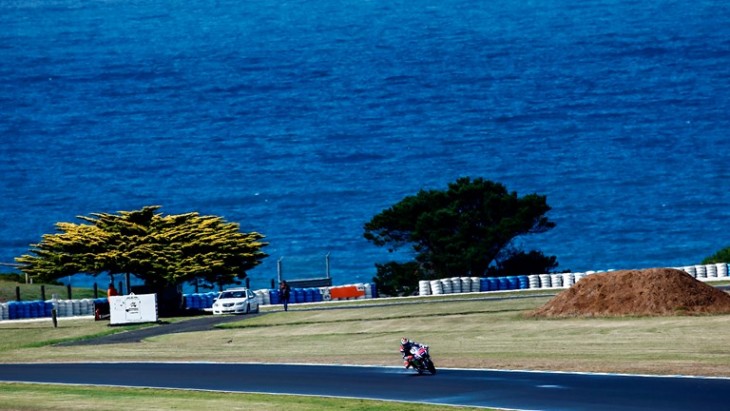 The Movistar Yamaha MotoGP team was back on track today for the second day of the Phillip Island MotoGP Official Test. Though the morning started off wet, the riders were able to ride throughout most of the day. Jorge Lorenzo was quick to get up to pace and ended the day in third place just slightly ahead of teammate Valentino Rossi in fourth.

Today the Movistar Yamaha MotoGP team successfully completed a second day of testing in Australia. Wet weather at the start of the day, followed by a drying track around noon delivered challenging conditions for riders Jorge Lorenzo and Valentino Rossi, but they were unfazed and secured third and fourth place respectively in today’s standings.

Despite the rain in the morning, Lorenzo used the day to its full capacity. He had nearly the entire track to himself at the start of the session when he opted to continue working on bike set up, looking for the optimum balance on the YZR-M1, especially with increased tyre wear, gathering valuable data for the engineers. As track conditions improved, a flurry of activity followed with all riders streaming out of the pits. The warmer temperatures in the afternoon allowed the Spaniard to get down to a lap time of 1’29.357s, on his 65th lap out of 80, only 0.226s from the front.

Rossi also had a productive day and set multiple fast laps. As soon as a dry line formed at the Phillip Island circuit, he didn’t waste a second and seized the opportunity. He went out on track and set a 1’31.1s on his fifth lap to take over at the top in the provisional time sheets. He continued to drop quick laps even when the brief sunny spell was spoiled by more rain, and completed 71 laps in total all the way through the afternoon. His best effort was a 1’29.404s for fourth place, 0.273s from today’s fastest time.

“This morning, when we started the session, we thought that the weather was going to be similar to yesterday with lots of interruptions due to rain, but in the afternoon the weather improved significantly and we were able to start working. In the available dry track time we managed to tick off a lot of items from our test plan. We tested a new front fork as well as front tyres, as per Michelin’s request, and we completed half a race simulation, so in the end it has been a positive day for us. Unfortunately we haven’t been able to extensively test the two bikes yet for both riders, which is a must for tomorrow. Once we have made a decision on which bike we will continue to develop, we will start fine-turning the set-up and the electronics.”

“I was concentrating on trying many things and when I had the good tyre on the front, the rear wasn’t new so I couldn’t improve and do a time attack. Our rivals are fast, especially Maverick, as he likes the track and he is riding very well. Today we have experienced some issues on the front with the stability to ride confidently with open throttle. I think it was a combination of the type of track, the type of tarmac and the type of corners, which are faster than Sepang and are inducing these problems. If we can solve the problem we can be much quicker, let’s see if it’s possible. Looking at what happened today, it looks like the new electronics are going to change the performance of the bikes a lot on other tracks. Someone can have an advantage at one track and maybe they have more problems at another. We have to understand how to be more competitive here to get the same advantage we had in Sepang.”

“We’re lucky and happy, because the summer arrived today and we could work on the bikes and understand more, especially about the tyres. Sincerely, I’m very satisfied about today because from the morning until the end I was always fast and competitive and in one of the first positions. I also had a good feeling with the bike and I was able to improve, from the morning to the afternoon, the pace and the lap times. The only thing we haven’t had time for was to compare the two bikes, we will do it tomorrow, hoping we have good weather like today. About all other things I’m satisfied, because I have a good pace and also my best lap is good. I got fourth position, but the first four are the four riders that were more competitive today and are close in times, so we are there at the front. For sure, keeping up the pace in the race will be harder, simply because you get less help from the electronics, you have to do more work with your body and the throttle, so that will be a bit more demanding.”

Monster Yamaha Tech3 Team riders Bradley Smith and Pol Espargaro leapt back on their Yamaha YZR-M1’s and continued their pre season workout at the second day in Australia despite the weather interfering once again. Eventually, the sun broke through in the afternoon, which allowed the Tech3 pair to get back up to speed whilst setting competitive lap times.

Bradley Smith built on his result of 3rd place yesterday and lapped tirelessly as he carried on his preparation work with testing setup options and Michelin tyres. The young Briton clocked his personal best lap time on his final run, which saw him just half a second from the Yamaha Factory rider Valentino Rossi. On the other hand, Pol Espargaro consistently improved his pace once the track conditions had stabilised, whilst collecting valuable setup data, and his personal best left him only two tenths of a second behind his teammate.

“It was a long and thorough testing programme today, but I feel we did what we had to and we achieved a lot. There were a few things that I wanted to follow up from Sepang and I’m pleased to say that the outcome is positive and they seem to work here. Therefore, heading in that direction with the bike setup will be key for us. We focused on the front end setting as well in order to make the bike more stable in high speed corners. Phillip Island has a lot of fast corners and we tried to find a bit more safety and balance so I could commit further and ride a quicker lap time. Michelin brought two different spec front tyres which the factory guys already tested in Malaysia and I finally assessed these. To be honest, I definitely felt that they allowed me to cut my lap time. Yet unfortunately there aren’t many of those tyres available here, therefore I don’t think there will be many to use tomorrow. Still, it was useful to sample them in order to confirm our direction and we will have more of those tyres in Qatar. It was a shame that some of the track time was cut due to the red flag and the rain in the morning because I was hoping to run a race simulation. These are vital to our testing programme because it allows us to be clear about my feeling with the bike at the end of a GP. Of course, the Yamaha handles differently as the race distance progresses so by testing this factor here, we gain experience and knowledge, which we can use when the season kicks off. However, I’m happy with what we achieved, even though I think 17:45 came around too quickly! Lets see what happens with the weather tomorrow and we’ll continue to try and progress a bit more with the front end setting.”

“Overall, I believe that today has been positive for us and even though the result is not at the top of the timesheet, our rhythm with the bike is encouraging . We are much closer to the front than we were in Sepang and in addition, my feeling with the bike has improved significantly, so we’ve taken a big step forward. I was able to repeat my fastest time on numerous occasions and on different runs, which is definitely promising and it shows that we are heading in the right direction. The only thing missing from today is that we weren’t able to post a single lap time as it would have been nice to find ourselves a bit higher up in the standings. It was completely our fault because for different reasons we were unable to improve at the end. Still, this wasn’t the main aim of today’s testing schedule, so the overall feeling is really positive and I can leave the track satisfied and with a lot of confidence for tomorrow.”