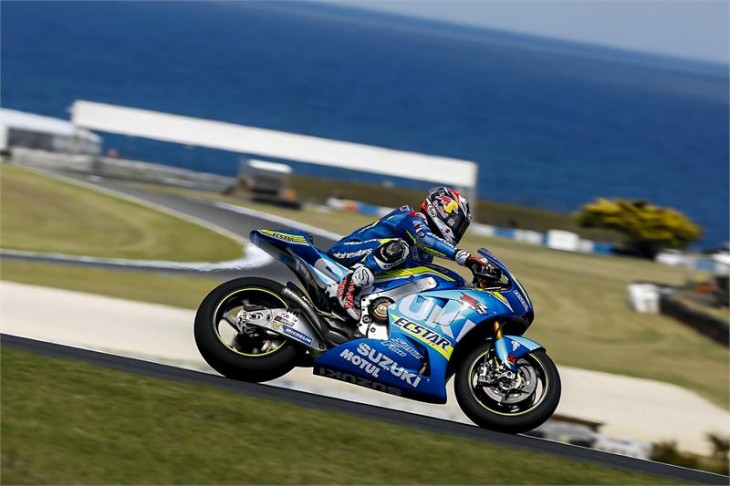 The young Spaniard was the first rider under the 1’30 barrier in the afternoon and with the track getting more-and-more grippy with the sun out he swapped the lead many times but finally blasted his way to the top with the excellent 1:29.131. His performance is even more impressive considering that his best time was hit in the last run of the day where he lapped four laps in a row under the 1’30 barrier. His best time today is nearly half a second faster than his best in last year’s race, confirming the positive job done during Winter both in rider training and in the GSX-RR development by R&D department in Hamamatsu, Japan.

Although the track conditions allowed the riders to ride mainly in the afternoon, Viñales completed 79 laps in the whole day, testing the consistency of performance.

Team-mate Aleix Espargaro continued to work to find a proper feeling with his GSX-RR. After yesterday’s disappointment for the poor weather conditions that prevented him testing fully, his performance today was underneath his own expectations, with a best lap in 1:30.385 that sets him in 15th place. Not so far, in 20th place with 1:32.599, is Test Team rider Takuya Tsuda, whose priority in Australia is not to go for the best lap but to intensively test the machine’s potential.

“According to the timesheet today has been a positive day for us, with Maverick very fast in the time attack but also very consistent in the pace. Apart from the timesheets, it is comfortable to see that he is improving run after run and that the machine is getting more-and-more competitive, allowing the rider to find better feelings. We are running an intense job here, also the Test Team, to get the most out of our potential. Maverick was able to go through many items that we needed to test and so we have to be happy about today overall. Although Aleix had some troubles in these opening two days, both with the feeling and because of the varying weather conditions, he is working hard to finalise the set-up and today he could make some steps forward although his performance was not as good as he expected. At the end of the day he could try a more likeable machine, so tomorrow we will exploit the last day to also improve on his side.”

“Today I felt very good with my GSX-RR, confirming the positive feeling I had already yesterday even though it was in mixed conditions. Today we worked well in two ways; the first is the fastest lap, which gave me the first place, and the second is the approach we had with the development, improving little-by-little but consistently in every run, applying little improvements to the machine without any major change. This consistency gave me not only the fastest lap but also a very comfortable feeling with the pace. Of course the track was a contribution, let’s say. Here in Phillip Island I feel always confident, I like the track and I can express myself as I want, in any conditions. I’m happy to see that the machine is supporting me in this enjoyment, allowing me to be so competitive, I’m improving a lot in my capability to transfer my feelings to the team and they on their side are doing a great job supporting me and giving me good solutions for what I ask for. It’s a learning process for all of us and today’s result gives us an injection of enthusiasm.”

“Today was not a good day for me, we tried a lot of different things to improve the feeling, especially working to be more effective in the entrance into the corners, where I felt totally uncomfortable, but probably it was a matter of myself. The bike improved a little since the morning, but today I felt too rigid in my movements over the machine and not able to ride as smoothly as I wanted. I will have a good rest tonight and then analyse things with my team to understand what and how we can improve, although I can’t blame them for today. The engine has improved a lot and the new tyres and seamless gearbox gave me much more stability in many corners. For sure Suzuki did a good job, we saw today Maverick’s performance which certifies that the potential is higher than what I did, therefore I’m really keen to recover my performance and get back to riding.”