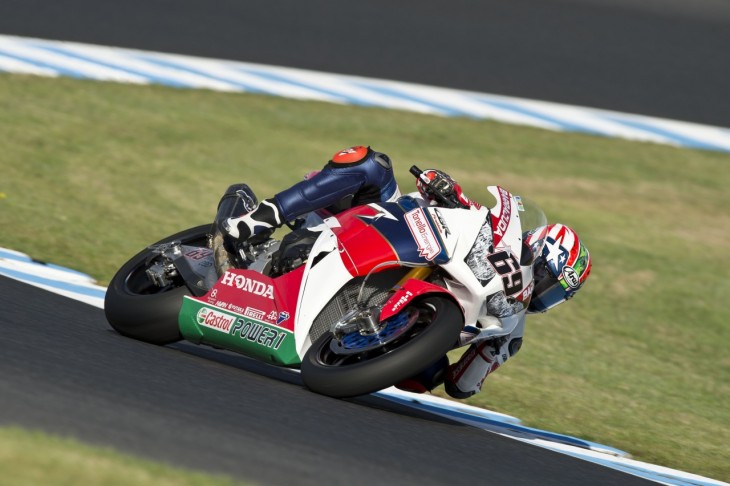 2006 MotoGP champ Nicky Hayden will participate in his first WSB race for Honda this weekend at Phillip Island, Australia. After spending the last several years languishing mid-pack (or worse) in MotoGP races, Hayden promises to be quite a bit more competitive in WSB.  We shall see.

Everything is new for Hayden, of course, but he seems to have the most difficulty coming to grips (no pun intended) with the new rubber. Apparently, the WSB Pirellis have significantly different characteristics to the Bridgestones Hayden used in MotoGP for the last several years. In any event, Hayden has been posting competitive times in testing (7th quickest at the just-completed Phillip Island test).

Hayden has a talented teammate in Michael van der Mark, which will help gauge Hayden’s performance on his new machinery.  As we previously reported, the pre-series favorites have to be Kawasaki’s two riders (both World champions), including Jonathan Rea and Tom Sykes. Sykes and Rea were 1st and 2nd quickest at the Phillip Island test (to no one’s surprise).  Stay tuned for reporting on the WSB championship here on MD. Below is the press release from Honda regarding the just-completed test:

The two-day WorldSBK official test has come to a close for the Honda WorldSBK team at the Phillip Island circuit in Australia. Nicky Hayden, Michael van der Mark and the whole team are now ready to tackle the opening round of the 2016 FIM Superbike World Championship, which is scheduled to begin on Friday at the same venue.

The overall track time of eight hours for the test – split into four sessions – was significantly reduced by mixed weather and several red flags. After a first day marked by intermittent rain, today the temperatures rose considerably and reached a peak of 38°C in the air (41°C on the track) that translated into a dramatic change of conditions for the riders.

Michael van der Mark showed great speed in all conditions aboard his Honda CBR1000RR Fireblade SP on the 4.445km fast and flowing Australian circuit, which last year was the stage for a stellar World Superbike debut for the flying Dutchman. The 2014 Supersport World Champion completed the highest number of laps for this test (123) and was fourth fastest with a lap time of 1’31.458.

Nicky Hayden got his first taste of Phillip Island on a Superbike ahead of his first race weekend as a full-time rider in the series. The 34-year-old American and his team tried different set-ups in terms of electronics, linkages, suspension and geometries, eventually finding a good base for the bike especially in cooler conditions. Hayden put in a total of 116 laps over the two days and his 1’31.558 placed him in seventh place overall.

The 2016 FIM Superbike World Championship will kick off on Friday at 10:15am local time (GMT +11) with the first free practice session.