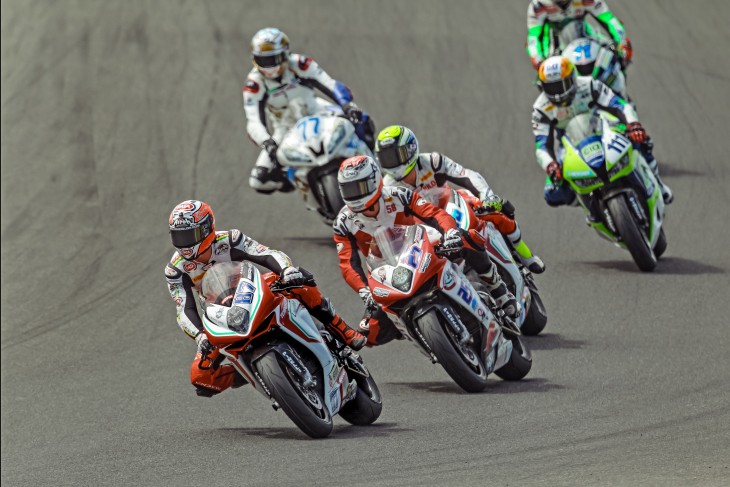 After the encouraging results in previous days, MV Agusta Reparto Corse riders wanted to improve their respective score but the bad luck was against the three riders. Despite the difficult race, It was a great satisfaction to see 5 MV Agusta bikes in the 11 top position of the race.

After showing a great feeling with his MV Agusta F4 RC machine, Leon Camier wants to repeat the good performance of Race1, when he finished in 7th position after an incredible remount. In Race 2 the British rider starts very fast and after only a few turns he is in 8th position; unfortunately a problem with the bike force the rider to go back to the Box after two laps. When he goes back on track Camier shows a good pace but it is too far from the points scoring position and the team decide to bring him back to the box to analyse the data with the telemetry.

In WorldSSP Jules Cluzel gain the top of the race thanks to a great start but, exactly when he try to push harder and leave behind the other riders, he suffers a gearbox trouble leading him on the gravel. The french rider is able to start again ending up in 17th position. The teammate Lorenzo Zanetti is forced to loose positions at the start of the race, but the fast Italian rider get a good rhythm and start passing many riders, arriving with his MV Agusta F3 675 in the 6th position, by recording the Best Lap of the race. Unfortunately his remount and race finish after a bad contact with the rider Caricasulo after turn 6.

Leon Camier #2 – I started the warmup lap feeling ok but when after the first turns of second lap of the race I couldn’t turn with the rear, even when I touched the gas very gently the bike was like on oil. Now we must work on the data to understand where the problem was. I am sorry because the bike was really good, especially with the electronic and setup. Hopefully Thailand will be better.

Lorenzo Zanetti #87 – During lap one I suffered a loose of grip and I lost several positions. I suffered very hard contact, especially the one with Caricasulo that took my front rear away. It is sad, because I made the Best Lap on the race, my tyres were still good and I had the rhythm to won the race. This is just the first round and I want to stay positive for the next one.

Jules Cluzel #16 – I started really fast and I was able to move to the first position. I tried to leave the other riders behind pushing harder, because I knew my pace was faster then the others one, but I had a trouble to my gearbox and I went on the gravel. I am sorry because I had all the chance to fight for the podium but we will be back for the next race.