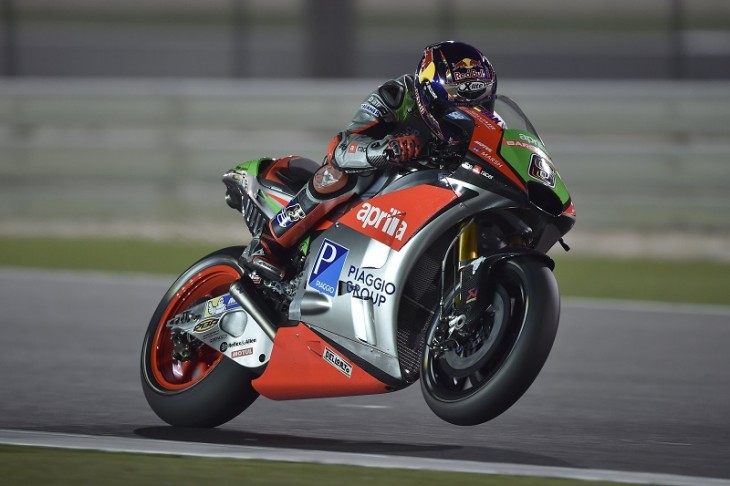 APRILIA ON THE TRACK LOOKING TO IMPROVE THE NEW 2016 RS-GP
16 LAPS AND A GOOD LAPTIME FOR BAUTISTA, 15 LAPS FOR BRADL

Losail (Qatar), 17 March 2016 – With the first free practice session that is held on Thursday only in Qatar, the first round of the 2016 MotoGP season kicked off. For Aprilia it was the competition début for the new 2016 RS-GP. With only a couple of test sessions under its belt, the prototype from Noale stood its ground well for what was just the first step in a season where, according to Aprilia Racing’s plans, it must grow in terms of performance. During this début weekend the goal is maximum reliability for the technical base on which to build and develop.

The Aprilia Racing Team Gresini riders took to the track under the Losail artificial lighting in search of the best feeling with a vehicle that is still waiting to be discovered, and therefore with the goal of achieving consistent performance. At the end of the day Alvaro Bautista put in a total of 16 laps, whereas Stefan Bradl finished 15. The Spaniard, who also tried out a few updates with respect to the bike that was used in the last tests, also had a good time result, stopping the clock at 1’57,129 to keep the gap from the front-runners within a second and 68 hundredths. Bradl’s best time was 1’57,989.

“We lapped for the entire session without any problems and that is very important since our top priority is gaining familiarity with the bike. Today we made a few changes to continue development so I didn’t have the same feeling as the last tests because with these changes the character of the RS-GP was slightly altered, but that is all part of the testing that needs to be done. Tomorrow we’ll glean from what we learned today”.

“This was a good day of practice for us. We got a lot of laps in. At the beginning of the session we were a bit shaky, but toward the end my feeling began to improve both with the bike and with the tyres. I’m pleased because we got off to a good start. Now we will have to try and push to improve in tomorrow’s sessions”.