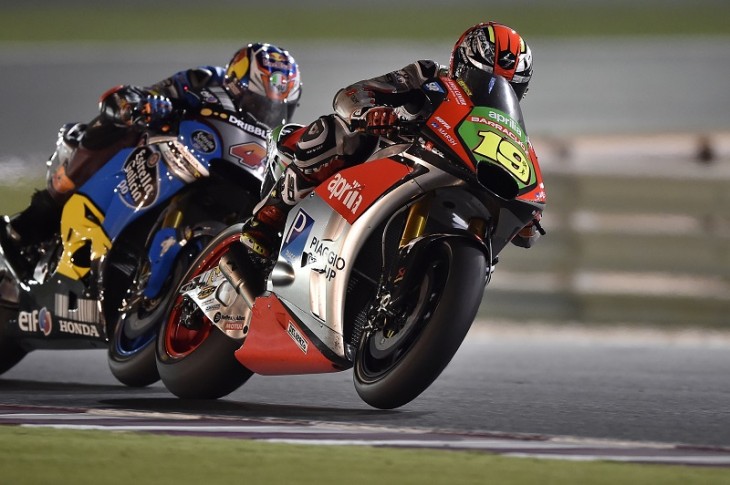 A NICE DÉBUT FOR THE APRILIA RS-GP WHICH, WITH VERY FEW KILOMETRES UNDER ITS BELT AND IN THE VERY EARLY STAGES OF DEVELOPMENT, IS IN THE POINTS STRAIGHT AWAY WITH BAUTISTA

ROMANO ALBESIANO: “WE HAVE AN EXCELLENT BIKE WITH WHICH WE CAN GO FAR”

Losail (Qatar), 20 March 2016 – With very few kilometres under its belt, the Aprilia RS-GP 2016, in its maiden race, confirms the quality of the project and, ridden expertly by Alvaro Bautista, crosses the wire taking its first championship points in the Qatar GP. The first race for the Italian V4 brought with it plenty of questions on how such a young project would hold up. Bautista, welcomed in the garage by a long applause from the entire team, dispelled all doubts after a race where, after contact on the first corner which consequently made him run on, he followed, regained positions and finished in thirteenth place (for three championship points). Along with the pace demonstrated, this is an excellent start for this new season.

His teammate on the Aprilia Racing Team Gresini, Stefan Bradl, was also moving up through the pack and, after catching up Alvaro, had already moved into the points zone when a sliding crash finished his race early. But what counts is that the 2016 RS-GP demonstrated that it is a project with great potential, on which Aprilia’s MotoGP adventure can be built.

“We are very happy! Today we achieved a goal that seemed at times to be truly difficult. We got through the entire weekend without any technical problems and we took Alvaro’s bike into battle on the track against extremely developed bikes, even lapping at a very good pace. We obviously have a long way to go, but not all the work in terms of performance has begun yet. I am therefore very happy. The bike is really proving to be an excellent base on which we will go far”.

“This was an exceptional début if we consider how few kilometres this bike has put in, or where we were in the last tests. Aprilia has done a truly exceptional job and Alvaro believed in us, giving his best. And let’s not forget that, compared to last year, we lost any advantage of more petrol or tyres. Everything tells us that we have very good potential on which to build our growth”.

“It was important to us to finish the race, but it was not a walk in the park. I managed to start well, but on the first corner there was contact with another rider. That made me run wide and I found myself in last place with a lot of ground to make up. From that moment I set my pace. In the first laps I had a strange feeling with the grip and that is something we will need to check. From mid-race I began to gain on the other riders until engaging in a great battle with Miller and Laverty. In any case, thirteenth place is a good result for us. I want to thank the team, Aprilia and the partners to this project. They all worked nonstop to get to this first race”.

“At the start I felt good. My feeling was getting better and better every lap and consequently so were my times. The crash is hard to explain. We need to analyse the data closely to figure out what caused it. My feeling is that there was a loss of grip for both tyres in turn 15. In any case, the start was positive. I managed to get my time below 1’57 in the race, so that means that my confidence is growing lap by lap. Now it will be important to take maximum advantage of the data collected and to have a good race weekend in Argentina”.