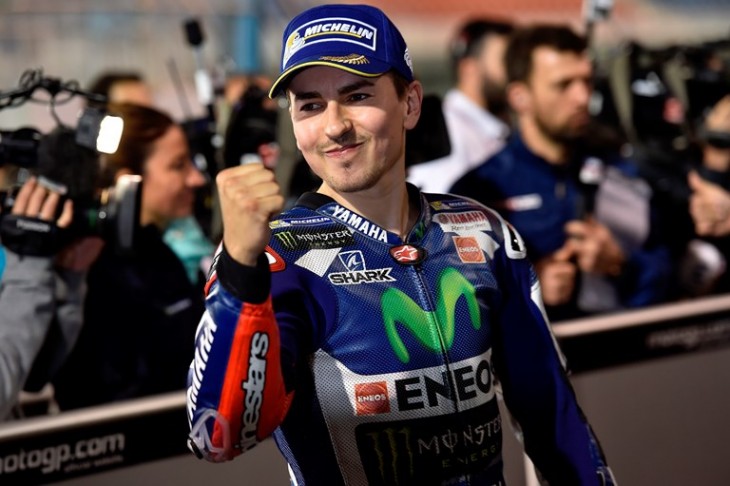 Movistar Yamaha MotoGP rider Jorge Lorenzo continued his strong form today during the Qualifying 2 session, returning to the top of the time sheets again under the floodlights of the Losail International Circuit. He secured the 62nd pole position of his career with a 1’54.543s lap, making him the new leader in the all time pole position classification. His teammate Valentino Rossi, on the other hand, left it to the last lap to make his move, securing fifth on the grid for tomorrow’s Commercial Bank Grand Prix of Qatar.

Movistar Yamaha MotoGP riders Jorge Lorenzo and Valentino Rossi rode on the limit this evening during an intense 15-minute qualifying session at the Losail International Circuit to take first and fifth respectively on the grid for tomorrow’s Commercial Bank Grand Prix of Qatar.

After setting the pace in FP4 with a 1’55.301s lap, Lorenzo was the last rider to start the 15-minute qualifying shoot out. As the second to last man to leave pit lane he enjoyed some clear track space. He immediately dropped under the 1’55 mark on his first hot run to take over the provisional pole from his teammate.

Unable to improve on his next lap, he came in for a fresh set of tyres with a little more than six minutes left on the clock and had another go at a time attack only one and a half minutes later. The triple and reigning MotoGP Champion put his head down once more, but had to relinquish the hope of bettering his own time after encountering a big moment on his third flying lap. Fortunately none of his rivals was able come any closer than 0.091s to his 1’54.543s lap, giving him the first pole position of the 2016 season.

Rossi was also on the charge today. Similar to his teammate, the nine-time World Champion left it late to get out on track, but needed little time to put his stamp on the proceedings. His first stint saw him briefly take provisional pole with a 1’56.024s lap. Despite improving his time on his second go, a flurry of activity pushed him back to ninth.

Eager to move up the ranking order, the Doctor quickly returned to the pits and came back out on track with a little less than four and a half minutes of the session remaining. He moved up from tenth to seventh place, but knew he had more to give on his final hot lap. Squeezing out every ounce of effort on his ultimate lap, he clocked a 1’54.815s, 0.272s from pole. This time briefly put him in fourth place, before dropping one place in the qualifying standings. The Doctor will start tomorrow’s race from the middle of the second row on the grid.

“Today we saw some very strong results from our riders. Jorge did very well, setting the pole position on his second lap, on his first tyre. Valentino’s fifth place is fully deserved and it’s a good position to start tomorrow’s race from. We were able to make another step in FP4 and it gave us the edge over our rivals in qualifying. We can be quite satisfied with the work we have delivered so far; the riders are comfortable with their setting and the way how the bike is behaving, but no points will be distributed until after tomorrow. We expect the race to be challenging with all the riders pumped for the opening race. Yet I think we are in with a fair chance to fight for some very good results tomorrow. We will use the warm-up to perfect the bikes’ settings and then we finally get to start the 2016 season with hopefully a very exciting battle.”

“It’s not bad to have this record for most pole positions on the first weekend of the championship. Today it has been quite difficult to keep calm and try not to crash, because sometimes you have a good feeling with one rear tyre and you put in another and you have a different feeling. This is what happened on my second try, I almost crashed on the first lap, but luckily on my first try, my first lap was enough to keep the pole position. I expected to be a little bit faster and that everyone would come closer to the 1’54.0s, but finally this 1’54.5s was enough to be on pole.”

“I’m quite satisfied, because it’s important that we start from the top5 and we are fifth. It’s the ‘minimum target’, but it’s not so bad because we are not so far from the pole position. I lost a little bit in the second part of the lap, I didn’t do a perfect lap. If I had done so, I could have stayed a bit more in front, but anyway it’s good to start in fifth place. I’m also quite happy about the pace. We have to work and improve in the warm-up tomorrow, but I was already not so bad. It looks like four or five riders are fast and have more or less the same pace, but I’m most worried about Marquez, because today he had the best pace.

“I’m happy and satisfied with my decision to stay with Yamaha for two more years. I thought I wanted to wait a little bit, but I spoke with Yamaha over the last few days and they were ready, so was I, and the contract was OK, so we said “why not?”. Now we can concentrate on the races.”

Monster Yamaha Tech3 rider Pol Espargaro will commence his 2016 campaign from the third row of the grid after a determined performance today in Qatar. A thorough effort in FP3 yesterday allowed the young Spaniard to progress to QP2 where he launched into action as soon as the session began. Espargaro built up his speed before setting a personal best on his last lap that was only just over six tenths from the front row. With his confidence high in his race rhythm, the 25 year old’s sights are now firmly set on winning the battle for the leading satellite position tomorrow.

Meanwhile, Bradley Smith pushed hard and produced a tireless qualifying assault today that will see him commence the Qatar Grand Prix from 11th on the grid. The 25 year old had to battle through Q1 after just missing the direct qualification to QP2 by only 0.029 yesterday, but he wasted no time and graduated straight through to the second session after setting a 1’55.490. Here, he upped his pace before firing a personal best lap which was just a tenth from his teammate. The British star now confidently awaits the 22 lap sprint tomorrow where he aims to fight for a top eight result.

“In all honesty, I think that we have put ourselves in a promising place for tomorrow. My race pace is strong and our position in FP4 showed that. We have a clear idea about which choice of compound to use and we know that some other riders are struggling with the tyre life. However, we still need to stay focused and sort out a few minor issues in tomorrow’s warm up, but I feel prepared and ready. Regarding my qualifying position right now, I’m actually a bit irritated because I’m convinced I could have done a better lap time. Of course, that’s easy to say now, but when I left the garage for my last run I was together with some other riders and as we aren’t particularly strong on one single lap at the moment, the last thing I wanted was to have the other riders behind me. Therefore I waited, but probably a bit too long, so I didn’t do a faster time. Nevertheless, I’m realistic and I wouldn’t have been on second row anyway, but I could have been at least a bit higher on my line, therefore there is a slight bitter sweet taste in my mouth. Yet, altogether we have done a good job. I did my lap on my own and I believe that there are a few riders with a worse rhythm in front. Tomorrow will, for sure, be entertaining and the initial laps with the full fuel load might be interesting but I’m 100% motivated to clinch a positive result.”

“I am pleased with my qualifying position today even though it was a different experience on the Michelin tyres compared to Bridgestone. I knew that we wouldn’t be challenging for any of the top positions, so I made the decision to stay out on the bike in QP2 in order to get a few more laps under my belt as well as figuring out several things for the race. All in all, I am satisfied that we are in and around the other satellite riders which ranges from 8th to 12th, so with a good start, we can be right in the mix. With regards to the setup, we are still trying to adjust some details, but I did a full race distance on a set of tyres and was still running competitive lap times. This is positive, however, we need to work something out for sector three and four, but particularly the third. The Yamaha’s strength is corner speed which is something we need to improve on as I don’t quite have the confidence to lay it into the corner, release the brake and go through. Therefore, this is what I need in order to make the difference, so we will study the data and go from there. A top eight position is achievable but we need to work hard between now and then. Having said that, I am excited for the first race of the season tomorrow and will give it everything I’ve got.”