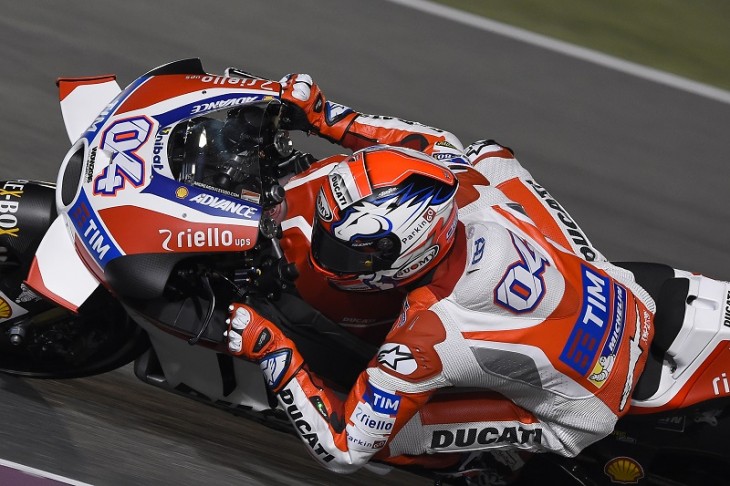 The two Ducati Team men will start tomorrow’s opening round of the 2016 MotoGP World Championship – the Grand Prix of Qatar at the Losail International Circuit – from the second row of the grid.

Andrea Iannone was fourth quickest in today’s fifteen-minute qualifying session, the Italian’s time of 1’54.693 coming on the last lap of his second exit. Iannone just missed out on pole position, after being slowed by traffic on the track in the last few corners. Andrea Dovizioso instead finished the Q2 session in sixth place, with a time of 1’54.963 he set on his fourth lap.

Dovizioso was third quickest in the thirty-minute pre-qualifying FP4 session, while Iannone was in fifth place.

“It was a very positive qualifying session, but unfortunately I found Redding on the line during my last lap and he slowed me down when I was improving my time. I could have picked up a nice pole position, but these things happen. In any case I am very happy about the progress we’ve made throughout the weekend and for the work we are doing, because we have always been very quick and constantly in amongst the leading positions. FP4 was useful because it helped us understand something vitally important in view of the race, where I think we will be competitive. For sure it would have been better to start from the front row, but in any case tomorrow we will try and get up to the front right from the early laps.”

“I am quite happy with my position, even though maybe I could have been a bit further up. However the aim was to start from one of the first two rows and this is what we have done, so I’m pretty happy about that. Unfortunately today the feeling with the bike, in particular during qualifying, was not the same as yesterday so I was unable to push as hard as I would have liked. I’m satisfied with the work we’ve done up until today: now we will have to decide which rear tyre to use in the race, but we are quick in any case and we have a good race pace, so I reckon we can be in amongst the leading group.”