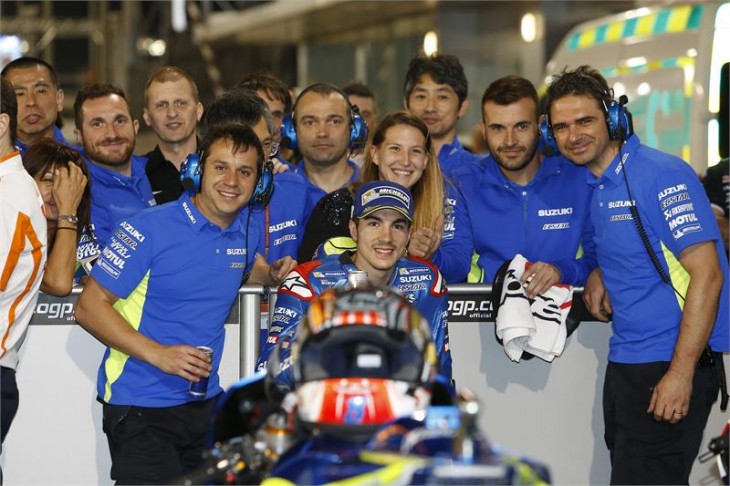 Team SUZUKI ECSTAR’s Maverick Viñales put-in a sensational final-lap dash to get himself and his Suzuki GSX-RR on the front row for tomorrow’s MotoGP™ opening round at Losail International Circuit in Qatar.

The 21-year-old Spaniard was sitting in eighth position with four minutes to go before jumping up the ranks to third with a best personal lap of 1’54.638, just 0.095s away from Pole Position and securing his second-ever MotoGP™ front row start; his first was at the GP of Catalunya last season.

Team-mate Aleix Espargaró will start from the fifth row after a crash in Q1 and his subsequent run back to the Suzuki Garage to change machines left him out of time to fully exploit a further faster lap. Although his feeling with the machine is growing lap-by-lap in terms of race pace, unfortunately he didn’t have right opportunity for a proper time attack. This will force him into a recovery race, but he is capable of this type of effort that is required.

“For sure this is a good result for us. I want to consider this front row as a reward for all the work that Suzuki’s engineers did during the whole winter, for the preparation work done by the Team during the winter tests and, above all, for Maverick, who has grown-up a lot and is exploiting at its best the year of experience he gained in 2015. This is a first reward that we want to enjoy although it is only Saturday. Of course, this good result makes us curious to see what will happen in race, for sure tomorrow we will start with the consciousness that the race can be different, but we are also aware that we can enjoy it. Aleix has been a little unlucky, I believed he could have got into the Q2 but unfortunately he crashed towards the end of the session and had to replace the machine; and everything got more complicated. His feeling with bike #2 was not the same with bike #1 so he couldn’t do better than 15th place, which is for sure not the position he deserves. Our main task now is to finalise a good set-up that will allow him to feel comfortable in the race and hopefully recover some positions.”

“I’m very happy, we did an incredible job and finally we are taking some of the profits from all the hard work we have done in the winter. This is only qualifying and the race is tomorrow, therefore I’m keeping my feet on the ground, but being in third place is a very good sensation and makes me proud. It means a lot that last year here, I started in 12th while now I am in third, it shows that we have worked hard and I want to thank Suzuki for the development job they have done in the winter and also to my team that gives me full support. The extraordinary last lap is the result of the hard work I have done in the winter with my training, but also the calmness I have now: I am exploiting the experience I gained last year and also the engine we have now, which is a huge step forward.”

“Today I have been unlucky, the practice session we did gave me a good confidence with the pace, but then in Q1 I had a crash and had to switch the bike. Unfortunately my feeling with the second bike was a little different, I felt some chattering at the front and couldn’t find the proper confidence. Of course starting so far back on the grid will make the race very complicated, I will need to push hard to recover; and that won’t be easy. However, my improvements in the past few days are very solid, my confidence with the pace is not so bad, but I still think I can do a good race and then we will take some time to analyse everything and increase our performances for the future. For sure this is not where we belong and I want to get back to the top.”