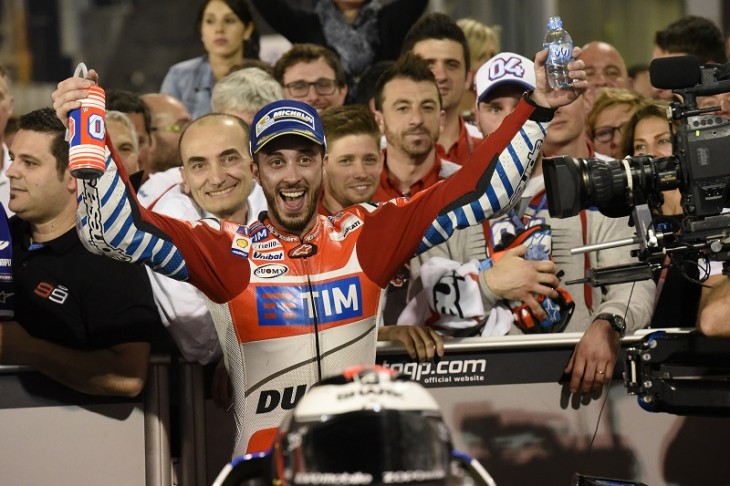 Andrea Dovizioso was on superb form in the opening round of the 2016 MotoGP World Championship – the Grand Prix of Qatar – which was held this evening at the Losail International Circuit on the outskirts of Doha.

Dovizioso rode a fast and aggressive race and remained in the top three positions throughout the 22 laps. The Italian got a great start from the second row to finish the opening lap in third place, and he then moved into second on the next lap. On lap 6 Andrea took the lead but after three laps he was passed by Lorenzo, who went on to win the first round of the 2016 season. In the last few laps Dovi came under pressure from Marquez but he managed to hold off the Spanish rider and defend his second place till the chequered flag.

Andrea Iannone’s race came to an unlucky end after he had powered away to a great start. After taking the lead on lap 1, Iannone led up until the fifth lap but on lap 6, while he was battling with his team-mate, the Italian lost the front at Turn 13 and retired from the first GP of the year.

Andrea Dovizioso (Ducati Team # 04) – 2nd
“Starting off the season like this is a dream! I am really happy and above all I want to thank my team because together we have done a fantastic job to become so competitive. Thanks to all of Ducati and the guys in my team: every so often I make them suffer, but I’m always there when it counts! I finished last season without having a good feeling with my bike and so to do the first race at this pace, with all the regulation changes, means that we have really done a great job. We are only at the start and maybe this won’t be the real situation throughout the season, but we have an excellent base that makes us confident for the upcoming races.”

Andrea Iannone (Ducati Team # 29) – DNF
“Today I had a good feeling and I was able to be quick right from the start. In the early laps I wasn’t even pushing to the limit when I touched the white line in the long right-hander: the bike suddenly went away from me and unfortunately I was unable to do anything to avoid the crash. It was a pity because I think we could have fought for an important result in this race. During the weekend we were always fast and in amongst the leading positions but unfortunately this error of mine took me out of contention. I am however happy with the potential of my Desmosedici GP and I am sure that in Argentina we will again be able to demonstrate how competitive we are.”

Luigi Dall’Igna (Ducati Corse General Manager)
“We are really satisfied with today’s result. Dovizioso took the new Desmosedici GP to a podium place on the bike’s race debut, conquering the runner-up slot with a great performance. In comparison with the podium here in 2015, for us this result has a completely different meaning, because this year, with the concessions allowed in the rule-book, Ducati raced under exactly the same conditions as Yamaha and Honda, demonstrating how competitive the bike is. It was a pity about Iannone, who was having an exceptional race and who led the first five laps before crashing out at Turn 13 on lap 6. In any case we have begun the championship with a very positive result and I’d like to take this opportunity to thank everyone in Ducati Corse for the great commitment shown and the work they have done over the last few months.”