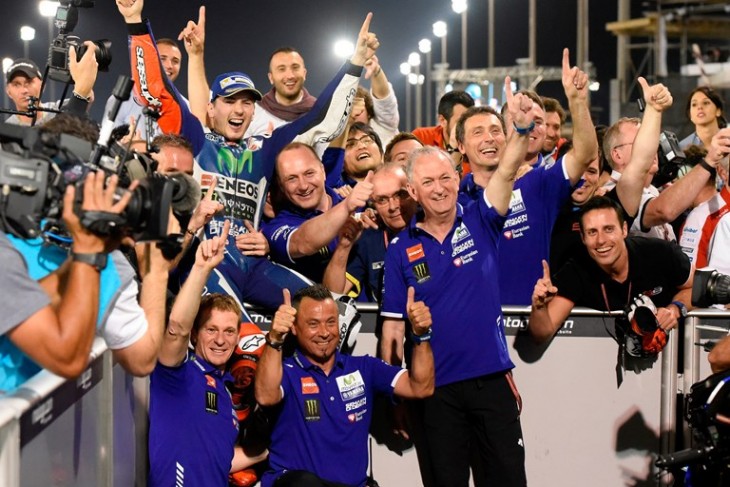 Movistar Yamaha MotoGP’s Jorge Lorenzo kick started the 2016 MotoGP season tonight with a masterful victory at the Commercial Bank Grand Prix of Qatar. Teammate Valentino Rossi also put on an impressive performance during the opening round at the Losail International Circuit, finishing in fourth place.

Movistar Yamaha MotoGP’s Jorge Lorenzo had been strong at the Losail International Circuit the whole weekend and the race day was no exception. He rode a faultless race from start to finish, and brought home the first win of the season. Teammate Valentino Rossi also put in a strong result at the opening round of the 2016 MotoGP season, missing out on a place on the podium by just a tenth of a second.

Lorenzo’s race went according to plan at the start of the opening race when he had a perfect launch off the line from pole position. He led for the first lap, but was chased by Andrea Iannone and Andrea Dovizioso on the over one kilometre long straight at the Qatar track. The Spaniard was forced to let them pass, but he didn’t give up. As his rivals battled each other he lay in wait and after Iannone crashed out the Yamaha rider took his chance to make a charge for the lead for the second time. With 14 laps to go, he smoothly passed Dovizioso and continued to increase his pace.

With clear a track in front of him, the Majorcan was in his element. In an effort to shake off Dovizioso completely, he used the nimble YZR-M1 to the fullest, setting a new fastest race lap record of 1’54.927s. He slowly inched away and crossed the line for the final time with a +2.019s lead over the man in second place.

Starting from fifth on the grid, teammate Rossi had a good start and made sure he placed himself close to the front, in fourth place, to stay in contention. He shadowed his teammate as the top five formed the leading group, but couldn’t find a way through. With rival Marc Marquez pushing him down one place with 20 laps to go, the Doctor used his experience and bided his time, hoping he could benefit from his harder option rear tyre towards the end of the race.

His strategy paid off when the rivals in front of him got involved in a scrap, causing Iannone to crash out. Now in fourth, he put pressure on Marquez by setting multiple personal best laps of the race, as he didn’t want to let Dovizioso and Lorenzo pull away. As the top three upped their pace towards the end of the race, the Doctor kept pushing to the maximum and set the fastest lap of the race thus far, trying to hang on to the back of Marquez. The battle for second between Dovizioso and Marquez lasted until the final corner, giving Rossi a chance of reaching the podium, but he came just short and took the flag in fourth place, +2.387s from his teammate.

Thanks to today’s results Movistar Yamaha MotoGP take the lead in the teams’ championship with 38 points. The next round will be held at the Termas de Río Hondo Circuit, Argentina, in two weeks’ time.

“It has been a superb start to the season. Jorge rode a perfect race from start to finish and was in control the whole time. This win was definitely deserved and a great reward to his and the team’s hard work. Vale also rode a good race today. It was a shame that he came a bit short in terms of pace, perhaps because of the decision to use the harder rear tyre, else I think we could have had both riders on the podium. When we started the weekend we set the target for ourselves to take home victory and that’s exactly what we did. This result gave us a good confidence boost to face the next round in Argentina. I want to say a big thank you to the team for their great effort.”

“We are there, in first position, without struggling and suffering and riding in the perfect way. For me, over all laps, this race has been one of the best of my whole career and that was why I was able to win and could make this little difference in the last three laps that gave me the victory. It was a little down and up with the tyres. We made the decision to put on the soft rear tyre, because with the hard one we couldn’t be so fast. The harder compound should become better and better, but I think what happened was the opposite. The softer tyre should get worse and worse, but it was faster and faster so this little difference was the difference between me and Dovizioso and Marquez. I was surprised how fast my pace was towards the end of the race. I was sliding so much, but at the same time I was very smooth and concentrated and made no mistakes and that’s why even with the pressure from Dovizioso, when I was at a margin of 0.4, .03, 0.5, I didn’t get nervous and kept riding better and better. I feel very proud of my riding and my race and also the work of the team, because we put together the electronics and the setting of the bike in a very good way.”

“At the end it was a great race, the pace was very fast from the beginning to the end, but unfortunately I stayed behind and I didn’t have enough speed to try and attack. I was there but I was never in the real fight, I was always a little bit behind. We need a faster pace and maybe the tyre choice can make some difference, but we don’t know. Maybe with the soft tyre I could go faster or I could go slower. We arrived behind and unfortunately didn’t get on the podium, but it was a good race anyway, with a good start. We are there, we have to work, but for sure we are competitive. Last year in Argentina was a great race, one of the best with a great pace and I was coming from behind, but this year it will be a different story, especially with the tyres. We need to understand our potential this year.”

Strong opening performance by Tech3 pair under the floodlights in Qatar

Monster Yamaha Tech3 Team rider Pol Espargaro kicked off the 2016 MotoGP season with a positive finish of 7th after a challenging race. The young Spaniard shot off the starting grid from 9th position and after a frantic first lap, he crossed the line two places back. From here, the resolute 25 year old stuck into his formidable race pace as he looked to climb through the competitive field. By lap six he had closed down and passed his teammate whilst he continued riding consistent times before overtaking Hector Barbera for 7th at the halfway point. Espargaro pushed onwards, yet in the final seven laps he suffered with visor issues and had difficulty seeing, but he persevered and diced with his teammate right up to the chequered flag. Eventually, he crossed the line in front, clinching the top independent position.

On the other side of the pit box, Bradley Smith delivered a notable performance today after completing the race just a blink of an eye behind his teammate by only 0.023 of a second. The young British rider began the sprint from 11th, but moved up one place by the end of the first lap. Then, he quickly locked into his race pace and homed in on the positions in front. By the mid point, Smith was in 9th and remained with Espargaro as the race distance progressed. On the final lap, the pair exchanged passes, with the British star finishing right behind his teammate by a hair’s breadth. His effort today strongly outlines his desire to win the leading satellite honours which he will fight for again at the next Grand Prix in Argentina.

“I am satisfied with the result today mainly because, looking back on how we finished the season in 2015, I was not entirely comfortable with riding last year’s M1. This year we have started differently and my feelings are better on this bike, plus I am convinced that I can do much more than before. Today the race was not easy, because I made some mistakes, especially at the start which didn’t go to plan. I was stuck behind some riders at the beginning and then I lost Maverick and Dani, which is a pity because at the end they had a very similar rhythm to me. It was a long GP but I am happy with the outcome especially after the battle at the end with my teammate. I was in front of Brad for nearly the whole race, with a gap of about one second. I controlled this amount of time and I was feeling comfortable but seven laps before the end, I encountered an issue where the sweat from my forehead dripped onto my visor and with the lights in Qatar, it dazzled me. Bradley caught 0.6 of a second in one lap and then right at the end he overtook. I fought back and retook him again then, but luckily I was first at the end of the race. For sure, Argentina will be a bigger challenge compared to here because we have had a lot of testing time in Qatar. In addition, I struggled at Rio Hondo last year so it will be tricky anyway, especially if the conditions are hot, yet we will give nothing but 100% just like we have done here.”

“I am pleased with the race result today, but the start was a complete disaster, so from there onwards, I knew that things could only get better! I tried to make a few passes in the opening laps and found myself in the position with the other satellite riders. Then I tried to get into my rhythm and aimed to not make any mistakes. In addition, I wanted to understand as much as I could with the new setup for the race and how the bike behaved in the 22 laps. As time ticked down, I got into a good fight with my teammate, plus he was really strong on the brakes into the first corner. Before that, I passed Barbera when he made a mistake and after having finally an open track in front of me, I got some confidence, put my head down and went for it. It was fun chasing Pol with three laps to go and it’s been a while since we’ve had a really tough battle like that. On the last lap, I made the pass into the final corner, but the fact that he is four kilos lighter than me made the difference on the way to the line! It’s been a very tough weekend and we started on a difficult note on Thursday and Friday, yet the team did a fantastic job and kept on working hard. We stayed focused and in the end we came away with 8th position, which is already one place better than last year. In addition, we are only one point away from our target which is to be the top satellite bike and so we will try to rectify that in Argentina.”