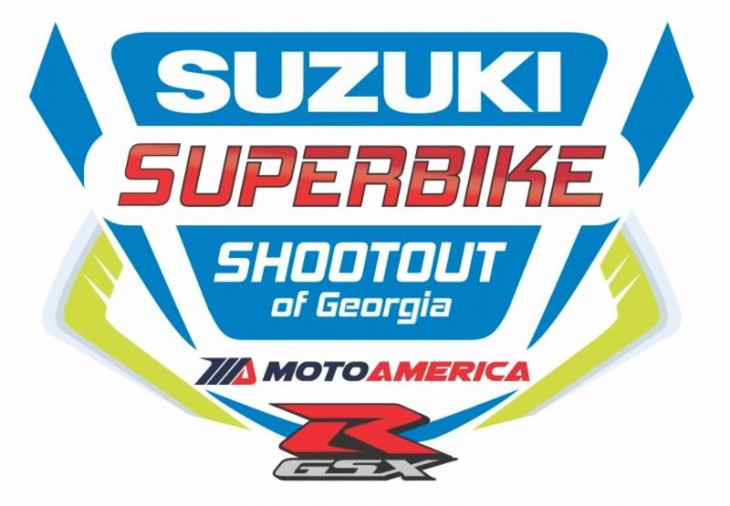 COSTA MESA, CA, MAR. 18 – MotoAmerica has announced that Suzuki Motor of America has been named not only as an Official Manufacturer of the 2016 MotoAmerica AMA/FIM North American Road Racing Championship, but also as the sponsor of the second round of the series at Road Atlanta. The Suzuki Superbike Shootout of Georgia will take place April 15-17 at the historic track in Braselton, Georgia.

This will be Suzuki’s second season as an Official Manufacturer of the MotoAmerica Series.

In addition to its series sponsorship, Suzuki will also be the sponsor of round two of the MotoAmerica Series at Road Atlanta with the race officially titled the Suzuki Superbike Shootout of Georgia. Suzuki’s relationship with Road Atlanta goes way back with the manufacturer running its Suzuki Cup Finals at the Georgian facility as well as being a past sponsor of the AMA Superbike races there. Fittingly, the 2016 season marks the 40th anniversary of AMA Superbike racing.

“This year is the 40th anniversary of the AMA Superbike Series and nobody has won more titles in the series than Suzuki,” said MotoAmerica President and three-time 500cc World Champion Wayne Rainey. “So it’s fitting that they are back on board with us for a second season as an Official Partner and it’s an added bonus that they’ve signed up to sponsor the second round at Road Atlanta. Suzuki has sponsored a lot of events in the past at Road Atlanta and it’s nice to see them back and sponsoring the race there.”

Suzuki scored its first AMA Superbike victory in 1977, and remains the all-time leader with 173 wins. The manufacturer earned its first of 13 Superbike Championships in 1979, and today no brand has earned more. Racing Yoshimura Suzuki GSX-Rs, Mat Mladin and Ben Spies earned the manufacturer seven consecutive Superbike titles between 2003 and 2009.

For the 2016  MotoAmerica season, the Yoshimura Suzuki Factory Racing Team includes Roger Hayden and Jake Lewis riding Suzuki GSX-R1000s in the Superbike class while Team Hammer Racing will again compete on Suzuki motorcycles. Lewis, who was injured in a pre-season training accident, will be replaced on the Yoshimura Suzuki team until his return by former World Champion Toni Elias.

In addition to returning as an Official Manufacturer and event sponsor, Suzuki’s support of the series will include demo rides at the majority of the MotoAmerica events.

“For more than 30 years, Suzuki’s support of American road racing is unrivaled,” said Rod Lopusnak, Director, Operations Head, Motorcycle/ATV Sales Operations for Suzuki Motor of America Inc. “Racing is in our DNA, it’s what pushed our engineers to create the GSX-R, and we know it’s vital to the lives of many Suzuki owners and fans, too. For all these reasons, we’re proud to support MotoAmerica and the Suzuki Superbike Shootout at Road Atlanta. We can’t wait to welcome all Suzuki riders and fans to our home track in April.”

For more information and to purchase tickets for the Suzuki Superbike Shootout at Road Atlanta, Click Here.