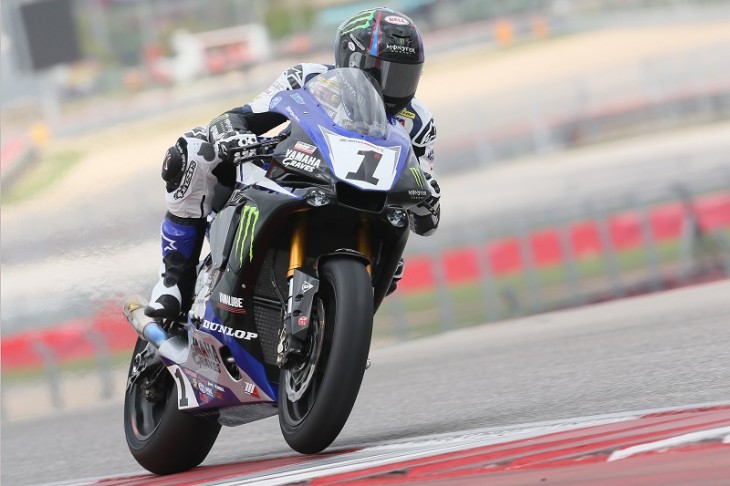 AUSTIN, TX, MAR. 23 – The two-day MotoAmerica Preseason Test powered by Dunlop Motorcycle Tires got started today at the Circuit of The Americas with Monster Energy/Graves Yamaha’s Cameron Beaubier and Wheels in Motion/Motorsport.com/Meen Yamaha’s Joe Roberts leading the way on the timesheets in the Superbike and Supersport classes, respectively.

Beaubier led two of the four sessions, held under sunny but windy skies, including the final one when he ripped off an impressive 2:09.352 to best Yoshimura Suzuki’s Roger Hayden by a whopping 1.881 seconds. For comparison’s sake, Beaubier led last year’s test at COTA with a 2:10.730 and then qualified on pole for the 2015 season opener in Texas with a 2:09.653. He’s already under that mark and it’s only day one of the two-day test.

“It went good,” the 2015 MotoAmerica Superbike Champion said. “We started off good and felt comfortable and then we kind of went through a little slump. We ran into a couple of little issues there, but overall at the end I felt really good and back to myself on my bike, on the R1. I’m looking forward to another full day tomorrow and hopefully the wind stays away a little bit. Overall, everything felt good.”

Tomorrow the majority of the Superbike men will take a run at the new Dunlop qualifying tires and Beaubier believes he might be able to get into the 2:08s with the soft-compound tire mounted.

“It’s hard to say what we can do with the qualifiers on, with the wind and how warm it is, but it would be really cool to get down to the 8s,” Beaubier said. “Who knows, though? We will have to see.”

Hayden ended up second fastest of the 24 Superbike class riders who took part in today’s opening day, the Kentuckian lapping at 2:11.233 in the fourth and final session after clocking a nearly identical 2:11.234 to lead the third session.

“Honestly, it went pretty good,” Hayden said. “We worked on a few things and got more comfortable. We tried some engine-braking strategies that seemed to work better. We got up to speed fairly quick so I’m pretty happy with the way the day ended up. We have a positive place to start tomorrow and it was nice to get some good weather and some good riding in. That was the most important thing to me really. I’m already pretty close to the lap times I did last year at the race and I’m well under last year’s test time so it seems to be good. The track is getting better where they grinded it down. I feel like we’ve got a good start this afternoon and I used some old tires at a pretty consistent pace. I just have to keep improving.”

Toni Elias made his MotoAmerica debut a good one, the former Moto2 World Champion doing an admirable job of filling in on the second Yoshimura Suzuki for the injured Jake Lewis. The Spaniard was fast all day and cut his quickest lap in the third session – a 2:11.351 that put him third fastest overall.

Fourth fastest went to another foreigner – Italian Claudio Corti on the HSBK Superstock 1000-spec Aprilia RS. Corti did his best lap in the fourth and final session – a 2:11.611.

Jake Gagne did his best lap in the third session on his Broaster Chicken/Roadrace Factory Yamaha R1, the defending Superstock 1000 Champion riding last year’s Superstock-spec bike until the afternoon session when he used his Superbike R1 for the first time. Gagne’s best lap was a 2:11.636.

Although Yamaha Extended Services Garrett Gerloff led three of the four Supersport sessions today, it was Wheels in Motion/Motosport.com/Meen Motorsports Yamaha’s Joe Roberts snatching the top spot away from the Texan in the final session. Roberts ripped off a 2:13.149 in session four to best Gerloff’s 2:13.392 (set in the third session) by .243 of a second. French newcomer Valentin Debise ended up third fastest on the M4 SportbikeTrackGear.com Suzuki GSX-R600.