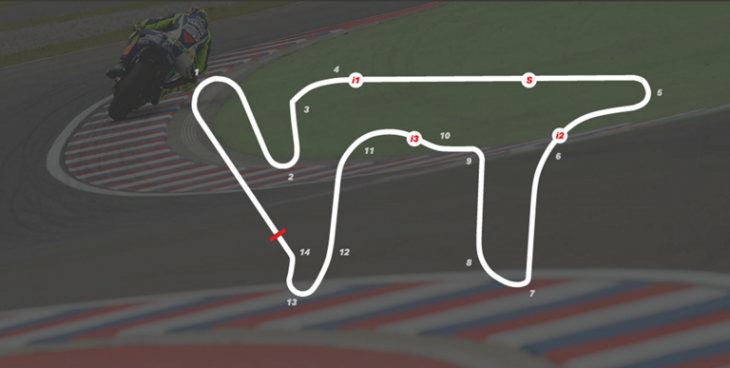 With the 2016 season in full swing, MotoGP fans can hardly wait for the Movistar Yamaha MotoGP riders to return to action at the Termas de Río Hondo Circuit. After Jorge Lorenzo’s dominant victory at the opening round almost a fortnight ago, he and teammate Valentino Rossi gear up for the second Grand Prix of the season in Argentina this weekend.

Lorenzo underlined why he was crowned 2015 MotoGP World Champion when he rode a flawless race in Qatar last week. He aims to continue his form at the Gran Premio de la República Argentina. Though he’s admittedly struggled there in the past he still took home solid points, securing fifth position in 2015 and third place in 2014. This year the Majorcan will settle for nothing less than a duplication of his sensational opening of the season and will again be giving his all to fight for a place on the podium.

Teammate Rossi is also eager to challenge amongst the front-runners again this weekend. At the first round he rode a solid race and almost landed his first top three finish of the season. The nine-time World Champion can hardly wait to hit the track again, where thousands of fans will be cheering him on this weekend in the fight for a podium place. Last year he came out victorious in a brilliant race in Argentina, after he secured fourth in 2014, and he is up for the challenge again.

The 4.8km long Termas de Río Hondo Circuit was officially added to the MotoGP calendar in 2014, two years after it was remodeled. The re-design aimed to turn the track into Latin America’s most modern and safest circuit, providing fans with even more exciting racing action. With a fun layout that includes a mixture of fast corners (five left and nine right) and a 1076m in length longest straight, this year’s Gran Premio de la República Argentina is likely to be another showstopper.

“After a good opening race in Qatar we’re on our way to Argentina. Termas de Río Hondo Circuit is a good circuit for us that suits our YZR-M1 well. Last year Valentino secured a brilliant victory in a hard battle that race fans are still talking about to this day. Last year Jorge arrived here still recovering from a cold. This year our riders are both in top form so we are expecting another close fight this weekend. We have already gained more knowledge on how well Michelin’s tyre life lasts over long distance from the first race. It will be interesting to see how the tyres will perform at this circuit where we haven’t done any testing yet. One thing is certain, after last week’s victory we are all incredibly motivated and we are looking forward to working towards another strong result this weekend.”

“I look forward to racing in Argentina! After the victory in Qatar and the good feelings on track, I now want to race at a circuit where in the past we struggled a bit. On the other hand, we need to keep our feet on the ground. We started the championship in a perfect manner but we still need to understand what the behaviour of the bike is like for different track layouts. I want to check if the bike with these electronics and tyres works well everywhere. Anyway to kick off the season like we did in Qatar is a good way to get confidence and work even harder to try to fight again for the victory here. The track is really nice and Argentina as well so I feel happy to go there.”

“I am very happy to go to Argentina. In this place I have many fans and it’s always nice to feel the affection and passion of these people. I have great memories here. Last year it was a great race. It will be difficult to repeat the same result but we will try. In Qatar I was not able to go on the podium but it was a good race anyway. We worked well throughout the weekend. In Argentina we will have to do the same thing, but we’ll have to do better in the race, and try to get on the podium. I really like the Termas track and we will try to do our best!”

Tech3 duo fired up for the fight on Latin American soil

The Monster Yamaha Tech3 Team pairing of Pol Espargaro and Bradley Smith eagerly look towards the impending Argentinian round, full of confidence and ready for another highly competitive battle.

Pol Espargaro, who charged to the leading independent position in Qatar, will be seeking to repeat that outcome at the Termas de Rio Hondo Circuit in the second event of the 2016 season aboard the Yamaha YZR-M1. Whilst Bradley Smith, who ended the previous race behind his teammate by only 0.023, will intend to deliver a strong performance and finish as close as possible to the factory MotoGP riders.

“I’m really looking forward to getting back on my Yamaha in Argentina after what was a good opening result to the year in Qatar. It was the start that I needed after an up and down season in 2015 and we’ve got to keep the momentum going and clinch another solid finish. Last time, we struggled at the Termas de Rio Hondo track and it goes without saying that this year will be a challenge again due to the new tyres. I am pleased with the Michelin’s so far and I seem to get stronger on them as the distance progresses, so with a positive race setup, I am confident for more performances like in Qatar. Still, the Argentinian track is very different to the Losail International Circuit, in all respects, so we will have a lot of homework to do on the opening day and it will be interesting to see how the Michelin’s work there. Nevertheless, I am sure I can go one step further than last time and I fully intend to fight for the top independent position once more.”

“Next up for us is the Termas de Rio Hondo circuit which will certainly be a memorable yet demanding event just like last year. The season has commenced in a good way for me as I finished in 8th at Qatar. Of course, I want to be higher than that but I was really close to my teammate so my intentions for this GP will be to go one step further and seal that top independent team position. It was quite a challenging weekend for us in Argentina last year, but I managed to end the race in 6th, and the circuit itself is good fun to ride and a bit different. Anyway, the key point will be the tyres because compared to Losail, the surface is very different. However, I aim to hit the ground running on Friday and get the work in to make sure we have a more successful qualifying this time and then go all out for another top 8 on Sunday. After the first Grand Prix we can see how competitive it is, but we will keep on pushing and fighting all the way to the chequered flag in every race.”