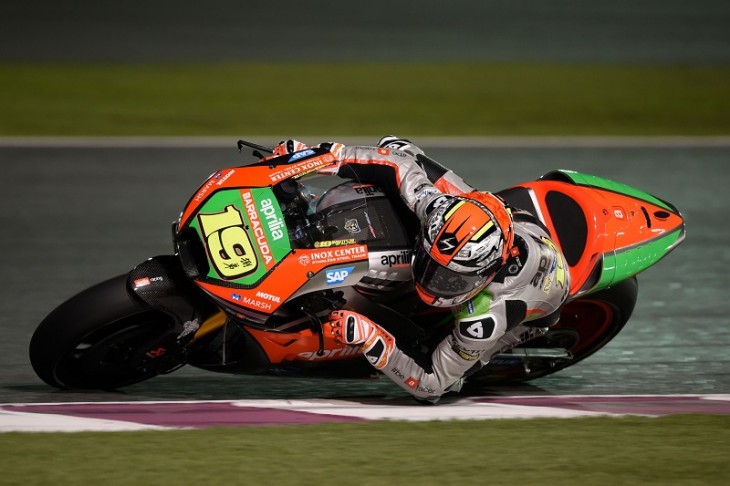 AFTER A GOOD START IN QATAR, APRILIA HEADS TO THE ARGENTINIAN ROUND ON THE TERMAS DE RIO HONDO CIRCUIT

Noale, 29 March 2016 – For the third year in a row MotoGP will take on the Argentinian Termas de Rìo Hondo circuit, the first of the two overseas rounds which will have the teams and riders then heading to Texas. The 4,800 plus metres of South American track will be an important test bench for the new Aprilia RS-GP which, in its budding career, has taken on tests and a race only on the Losail circuit.

The Aprilia Racing Team Gresini heads to the second round of the season highly motivated after the Losail début, where riders Bautista and Bradl consistently improved their feeling with the new bike. For Alvaro the first championship points astride the 2016 RS-GP also arrived, a result achieved thanks to his excellent race pace management.

From what all the key players in the project are saying, the goals for these initial races are clear: lap consistently to get to know the new bike and to achieve the best possible race result.

ROMANO ALBESIANO – APRILIA RACING MANAGER
“The Qatar race allowed us to gather a lot of information on the bike’s racing performance for the first time. We are going to Argentina with developments in various sectors, from the shifting strategy to engine tuning to torque and engine brake management. We expect to take a step forward in terms of performance with respect to the encouraging result that Alvaro achieved in the first race. From Stefan we expect that he will take that final step in terms of adapting to the new tyres and the new bike”.

FAUSTO GRESINI – TEAM MANAGER
“We are coming to Argentina after a positive Grand Prix in Qatar: Aprilia did a great job preparing for the first race and the result that Alvaro achieved was satisfactory. It was a shame about Bradl’s crash, but in any case he demonstrated good competitiveness. We are taking on this second round knowing that we are starting from a good base. The bike was born well and, despite the fact that the project is still very young, it has already demonstrated valid characteristics. No we need to continue racking up the kilometres and experience so we can improve on the many small things”.

ALVARO BAUTISTA
“We are going to the second round of the season ready for a new challenge like in Qatar because with the new bike we’ve never ridden on another circuit. Our goals are also basically the same: get in as many laps as possible, finish the race and take home some points. After confirming the good base that we have, in Argentina we’ll also begin to intensify our work on the chassis. I like this track. You need a lot of traction but also a good engine because there is a nice straight stretch. Considering the way we kicked off the season I’m optimistic. Both the team and I are ready to give 100%”.

STEFAN BRADL
“The bike is improving lap by lap and precisely for this reason I look forward eagerly to every new race weekend. I hope to do well in Argentina and I like the circuit. The layout is a bit different from the usual set up. There are no particularly difficult points but it will be an important test bench for us anyway. We have two important weeks ahead of us with the Termas race and then the Texas round. I’m confident in our potential as Alvaro’s result in Qatar demonstrated. We need to get some kilometres in and aim consistently for the points zone”.