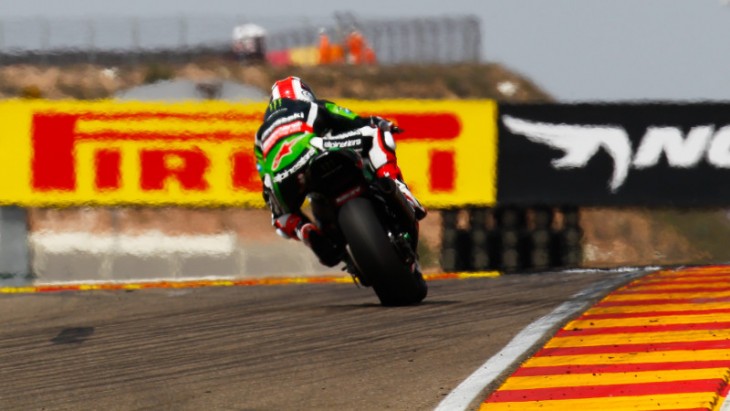 In 2011, MotorLand became the fifth Spanish track to host the WorldSBK Championship, and the 44th overall. Home success has been hard to find, however, as Carlos Checa is the only Spanish rider who has topped the charts, recording the fastest race lap in the very first WorldSBK race held at the track in 2011.

In the first two editions of the race weekend there were only two winners over the four races, and both were Italian: Marco Melandri and Max Biaggi shared the honours in 2011 and 2012. Since 2013, however, MotorLand Aragón has become a “British” track, in that all the winners have been British: Chaz Davies, Tom Sykes and Jonathan Rea.

Only three riders have started from pole at MotorLand: Marco Melandri in 2011, Tom Sykes from 2012 to 2014 and Leon Haslam last year. Chaz Davies is only one point shy of Marco Melandri in the chase to become the most prolific rider at Aragon: Melandri scored 138 points and Davies is currently on 137 after his victory last year; the first for the 1199 Panigale R and the only win by a two-cylinder machine at this track.

Aprilia is the only manufacturer that has been able to record at least one podium finish in each year the WorldSBK Championship has visited Aragon. Their podium tally is now a record 10; with Kawasaki just behind them on 8. In every race held at MotorLand there has been an Aprilia on the front row of the starting grid, and a Noale machine has won twice at MotorLand Aragon, both thanks to Max Biaggi: the second race in 2011 and the first in 2012.

BMW and Kawasaki are tied on the number of wins they have at the circuit with three apiece, and for the German manufacturer they come courtesy of Marco Melandri taking victory in Race 2 in 2012 and Chaz Davies doing the double the following year. Those were the last two podium finishes for BMW at this track, a fact Jordi Torres will be looking to change on board his Althea BMW.

Kawasaki shares that record number of wins in Aragón and recorded a double 1-2 finish at MotorLand two years ago. Since 2012, there has always been a Kawasaki on the front row of the starting grid at the aragonés track. Last year Rea won Race 1 with Sykes in 3rd and in Race 2, the Northern Irishman was just beaten over the line by Chaz Davies on his Ducati.

Ducati struggled for good results at Aragon in the first races held at MotorLand, and after two third places by Carlos Checa in 2011 and 2012, they had to wait until last year for another podium finish. Chaz Davies then righted the anomaly, coming second in Race 1 and taking the victory in Race 2, making the Borgo Panigale factory the fifth different winning manufacturer at the track along with BMW, Kawasaki, Aprilia and Yamaha.

The only former appearance of Yamaha bikes at a World Superbike race at MotorLand dates back 2011, when the works team was able to take pole and win Race 1 thanks to Marco Melandri, who was also second in Race 2. MV Agusta are another points scoring manufacturer at MotorLand, with progress continuing to grow from last year’s races.

Honda have so far finished on the podium only once at Aragon, with a third by Jonathan Rea in Race 1 in 2014, but that record looks likely to change. In the first four races of 2016, Honda and van der Mark have a 75% podium record, only missing out once in Race 2 in Thailand, where the Dutchman was just off the rostrum in 4th. The best qualifying performance at MotorLand for a Honda is fifth as it stands; achieved by Jonathan Rea in 2014.

Reigning Champion Rea enters the Pirelli Aragón Round having led the Championship for the past 28 races. This is one of the longest streaks in history, which can become the third longest after Race 1 behind Bayliss on 41 (2001-2002) and Fogarty on 32 (1994-1995), if he retains his lead. That will surely prove a record to keep in mind as we head to MotorLand for another scintillating weekend of racing.