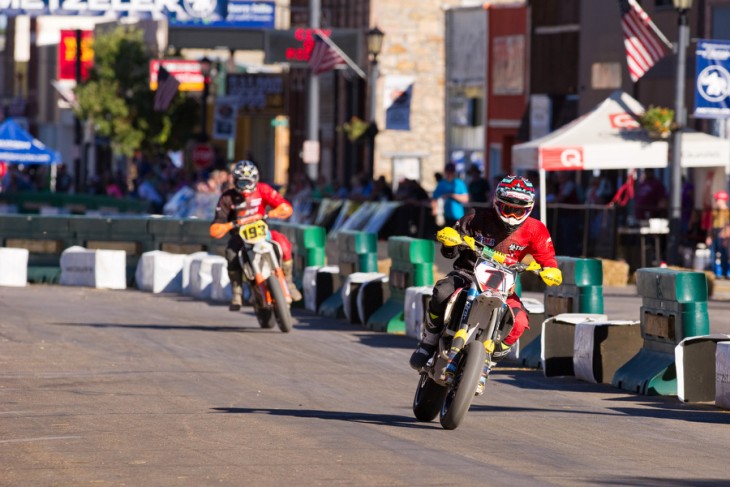 SAN DIEGO, Calif. (March 28, 2016) – For the first time in eight years, the AMA Supermoto Championship makes its big return to television. The TV package features three venues, as well as highlights of the other three races, with six episodes and a total of 12 airings on MAVTV Motorsports Networks. The series is pleased to announce those three venues to be featured for the 2016 season: round three in Sturgis, South Dakota; round five in Denver, Colorado and the season finale in Tuscon, Arizona.

All three venues highlight the variety of racing environments that makes Supermoto a unique form of racing – a street race in downtown Sturgis, South Dakota, a race at the Colorado National Speedway and a state-of-art-purpose-built kart track at Musselman Honda Circuit.

“Putting Supermoto back on TV has been my goal since day one,” said USA Pro Supermoto Chief of Operations Matt Stewart. “After years of working hard to rebuild the series and see its return to a National Championship, I’m now happy to finally see it on TV for the first time since 2008. We’re really excited to be working with Unit Productions and Greg White who brings a lot of experience of Motorsports and television to the table.”

“We are really excited to bring the AMA Supermoto National Series back to television,” said Executive Producer, Greg White. “Supermoto is extremely exciting with its mix of asphalt and dirt sections. We plan on bringing the viewer into the race action and expose them to the fantastic personalities that make up the AMA Supermoto paddock. We are so please to have partnered with MAVTV for the 2016 season. MAVTV is currently the premier motorsports network, so AMA Supermoto fits perfectly with their programming.”

In addition to the coverage on MAVTV, there will be global and national coverage of AMA Supermoto’s main event in Quebec City, Canada held in conjunction with the World Rally X Series.