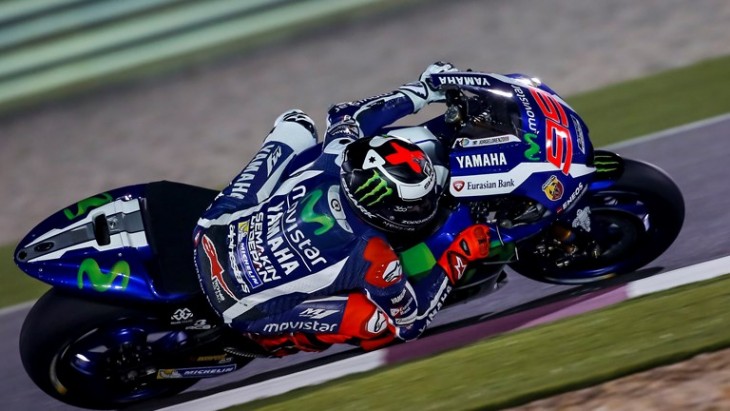 After two previous Official Tests in Sepang and on Phillip Island last month, Movistar Yamaha MotoGP riders Jorge Lorenzo and Valentino Rossi were back on the Losail International Circuit today for the final three-day practice session before the start of the 2016 season on the 20th of March.

Today the Movistar Yamaha MotoGP riders flexed their muscles once more on their YZR-M1s as they worked through a number of test items ahead of the start of the 2016 FIM MotoGP World Championship.

After a successful but challenging test on Phillip Island, Lorenzo was looking forward to continuing working on the setting of his Yamaha in Qatar. Though the Losail International Circuit can be testy, with the cold night temperatures and sand on the track, Lorenzo wasn’t shy to get busy and continued the progress he made during the pre-season. He soon took over the top spot in the rankings and went on to become the first rider to breach into the 1’55s. The Spaniard continued to prove how well the YZR-M1 performs with the new Michelin tyres when he set a best lap of the day of 1’55.452s and ended the day almost half a second ahead of all of his rivals.

Teammate Rossi was also eager to get back to work, but had to delay making his mark on the time sheets by a few minutes after he suffered a small crash in the morning. Luckily unharmed, he quickly returned back on the track. The Doctor soon got back up to speed and made the most of this first chance to test his bike under similar conditions to those expected for the upcoming race. He used the remaining time to set up his bike to his preference and climbed up to third place in the time sheets to wrap up the day with a best lap of 1’55.894s, 0.442s behind his teammate.

“After the two outings in Sepang and on Phillip Island, it was time for us to tackle the final Official MotoGP Test in Qatar before the start of the season in just three weeks’ time. The previous tests have provided us with a lot of valuable data, which our engineers have carefully analysed before coming here. Thanks to their hard work we have made steady progress with the optimisation of the use of the new Michelin tyres and this showed in today’s results. This first day in Qatar was the first time this year when both riders had two of the same bikes available to them, so they were able to speed up their setting development. Apart from a small crash by Valentino at the start of the day everything else went well. Jorge and Vale made a strong start today, ending in the top three with good speed and pace. Both riders have a good feeling here with the Michelin tyres and they look very comfortable on their bikes. Tomorrow we will proceed with our testing programme; we will compare some new items and if the time and conditions allow us we will try to fit in a long run.”

“I think we made a good start to the Qatar test, I have a good feeling especially with all tyres. We still need to improve the electronics, but to be one of the fastest ones on the first day is a good beginning. The feeling with the tyres is much better compared to Phillip Island, the weather is better and the combination of this track, the bike and Michelin is similar to Sepang. Let’s see how the performance will develop tomorrow.”

“I started in a bad way, because after ten corners I crashed. I wasn’t very fast, but maybe because I had too much angle the rear slid, but fortunately it was just a small slide at 70 km/h. It wasn’t a big problem but to start like this wasn’t fantastic… After the problem we jumped on the other bike and I’m quite satisfied about today because, also here in Qatar, it looks like our bike is competitive. We can be strong and fast and this is the most important thing, because it’s already the third track where the Yamaha is competitive. We also started with a good base set-up, in fact I didn’t work a lot on it. I felt good from the first moment and rode quite fast and I was able to consistently improve my lap times and in the end I’m in the third position, so it was a good day. Today Jorge was very fast, he was faster, but like in Phillip Island me, Viñales and Jorge are the stronger riders. In Phillip Island there was also Marquez, here it looks like he was a bit slower than us today. I’m happy to stay with the frontrunners and already lap in 1’55s, a little bit faster compared to the test last year, so it’s a good result. After the first two tests we decided to go with the bike that’s more similar to last year and now we have two race bikes ready in the garage, so we’re already in race-mode.”

Monster Yamaha Tech3 duo Bradley Smith and Pol Espargaro kicked off the last pre season test with two encouraging performances under the floodlights on day one in Qatar. Both riders aimed to build on the knowledge gained in Phillip Island and make some further preparation steps for the forthcoming season, with the highly anticipated season opener only 18 days away.

Bradley Smith concluded the day with a solid run to 9th position, as he examined tyre options and re-evaluated wheelbase settings. The British star waited until the mid point of the session to start but then set his personal best on his 23rd lap, which left him just six tenths of a second back from third marking a positive opening. Meanwhile, Pol Espargaro got up to speed in the desert as he positively adjusted his Yamaha YZR-M1 to the Losail track. After gaining confidence, the Spaniard powered to his fastest time on his 34th lap, that left a deficit of only two tenths to his teammate. Tomorrow, Espargaro will continue his work as he determinedly intends to climb the standings.

“The opening to the test was positive here and to be honest, I think we undertook a really smart plan. I decided to wait until the track cleaned up a bit because I was conscious of using the tyres to their full potential. In the previous tests, I rode a lot of laps in the first two days which meant that on the last one, I didn’t have many tyres left. As a result, I decided to change my strategy here and so I just used two sets today with the track conditions being how they were. Nevertheless, we were able to confirm some wheelbase options between bike one and two, and the good thing is that the setting that we found in Sepang and Phillip Island is working well here. Now that we have triple checked this factor, I am confident that we have a solid wheelbase setting which is really important for me, because we still had some questions after Phillip Island. In addition, today we compared two of the rear tyres, with one of these being in the allocation for the race weekend. We already have a clear indication of what we need to do with the race weekend tyre, which is a bit stiffer than the other one, plus we know the setting changes that we have to make to suit it. Furthermore, the front tyre that I tried in Phillip Island is available here in more quantity. I liked that compound, it has a wider profile and I’m keen to keep working on that as I just had access to one in Australia. So all in all, I feel comfortable and confident here in Qatar, it’s a track that I have always liked and I seem to ride well at. It’s nice to be here with my shoulder at 90% after the injury at Phillip Island but after ten days of physiotherapy and rehab, I’m already almost there.”

“Instead of it being a real first test day, today was actually about getting in touch with the track, the tyres and the electronics here in Qatar and it definitely wasn’t easy. At the beginning of the session, the track was very dirty and I ran with the softer tyre option, which I felt confident with straight away. However, when we changed to the harder compound afterwards, my feeling just wasn’t the same. This tyre was supposed to suit the track better, but we ended up struggling more. In addition, quite a few other riders crashed so I didn’t want to take any unnecessary risks. Therefore, we still have some work ahead of us, but we already understand the direction that we want to head towards tomorrow and I’m convinced that this will allow us to progress further up the field.”