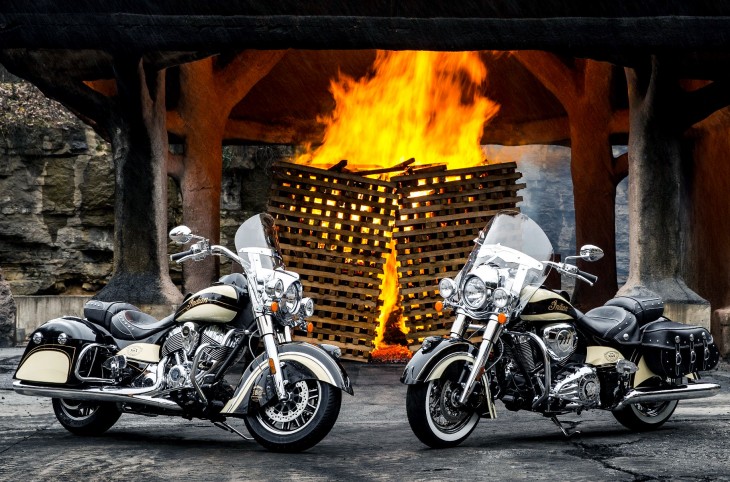 If you have been to the Sturgis, South Dakota rally recently, you would be forgiven for believing that heavyweight cruiser enthusiasts are a rapidly dying breed. Grey beards are the norm. Does this mean heavyweight cruiser sales are softening? Maybe not.

If you follow our Industry Press Release section, you will know that Indian recently announced the availability of two limited edition Jack Daniel’s models, including the Springfield and Chief Vintage (pictured above). Each bike carries a U.S. MSRP of $29,999. Indian says these expensive specials sold out in a single day (149 units)! It appears there is plenty of buying power left in the target demographic for heavyweight cruisers.  Here is the press release from Indian:

The individually numbered motorcycles – the first-ever production vehicles to feature Jack Daniel’s livery – became available for purchase on March 4. Created to commemorate the 150th anniversary of the Jack Daniel Distillery, which was registered in 1866, these special models were produced in extremely limited numbers that did not exceed 150 total units. Of the 149 units sold, 97 were purchased by customers in the U.S. and 38 found a home with international customers.

The final unsold unit, #1 of the limited edition series, an Indian Chief Vintage version that was the custom painted prototype built by Klock Werks, will be auctioned at Barrett-Jackson Las Vegas on October 6-8 at the Mandalay Bay resort, with all monies from the auction benefitting Operation Ride Home. More information can be found at Barrett-Jackson.com and JDOperationRideHome.com.

Designed in conjunction with Brian Klock and his inspired team at Klock Werks in Mitchell, S.D., the Limited Edition Jack Daniel’s Indian Springfield and Chief Vintage models both feature an array of genuine Indian Motorcycle accessories and custom accessories, as well as Jack Daniel’s-inspired custom paint and logos, badging, leather saddle and saddlebags. Each fender is inscribed with the names of the seven Master Distillers who have overseen the Jack Daniel’s distilling process over its 150-year history, and an inscription of Jack Daniel’s “Bottles and Throttles Don’t Mix” mantra reminds riders that drinking and riding are meant to be enjoyed separately. Both models also come with a custom-printed Jack Daniel’s whiskey barrel top to commemorate each bike, a two-year unlimited mileage factory warranty and free membership in the Indian Motorcycle Riders Group™ for one year. Each motorcycle will be hand-painted and built, with delivery occurring no later than August 2016.

“We knew that the pairing of Jack Daniel’s and Indian Motorcycles would be popular, but we never expected to get such a tremendous response in such a short time frame,” said Dave Stang, Director of Events & Sponsorships for Jack Daniel’s. “In special recognition of Brian Klock’s contribution to this program and his continuing support of many initiatives in the motorcycle community, Jack Daniel’s and Indian Motorcycle have partnered to give him the last motorcycle of the limited edition run. Brian Klock is now the proud owner of the Jack Daniel’s Indian Springfield #150.”

“The quick sale of these commemorative motorcycles speaks to the enduring appreciation for both the Indian Motorcycle and Jack Daniel’s brands,” said Steve Menneto, President of Motorcycles for Polaris Industries. “These motorcycles will always have a place in history, and will certainly be some of the most treasured of the new models coming out of Spirit Lake, Iowa.”