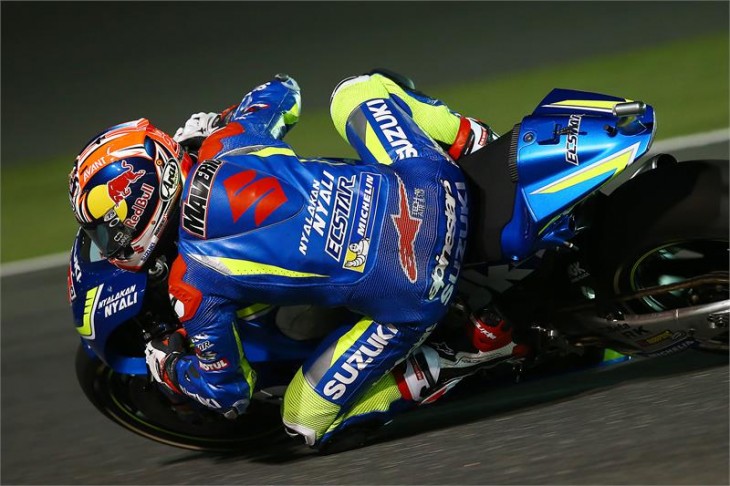 Team SUZUKI ECSTAR’s Maverick Viñales put his GSX-RR into the leading group at tonight’s Qatar MotoGP qualifying sessions to score in the top-five times under the floodlights at Losail International Circuit, as team-mate Aleix Espargaró improved his lap-times from yesterday.

Viñales positioned fourth in the early-evening FP2 with a time of 1’55.644, but improved this to a lap-time of 1’54.976 for tonight’s final session to place fifth – and automatic qualification into tomorrow’s Q2. His progression of performance has been solid and consistent throughout both the sessions, confirming the great confidence Viñales is finding with his machine. The softer Michelin tyres gave him further chances to improve his times on the track, that was more-grippy than yesterday; and this resulted in Viñales being one of the only five riders to lap under the 1’55s bracket tonight.

Espargaró also made big steps forward, finally finding more confidence with the machine’s set-up and improving his best time by nearly eight tenths-of-a-second from yesterday. The third session was crucial for this; and although he had some minor technical issues, Espargaró found an effective set-up and he improved his lap-times aboard his GSX-RR to place 11th with a lap-time of 1’55.491 – which was a significant improvement over his earlier FP2 time of 1’56.293. His best is also only 0.015s far from the top-10, which would have meant the direct access to Q2.

“We are happy with today’s performance of both our riders. Maverick, in particular, is increasing his performance lap-after-lap and it is very positive to see him in fifth place. Even more important is that his performance had been very consistent, being almost always within the top riders and showing a fast race-pace. He has tried different configurations and he has the feeling there is still room for improvement; and this gives us good hopes for tomorrow’s qualifying. On the other side, we are also happy for Aleix, as finally he could find a better feeling and the improvement he has done since yesterday is impressive. He only missed the Q2 direct access by 15 thousands-of-a-second, which means we have good hopes to get into the Q2 through the Q1. Our hope for tomorrow is to see Maverick to stay at the top, hopefully around the position he has already, and also to help Aleix to get closer and closer.”

“I’m satisfied with the work we have done today and the feeling I have. My best lap is good but more-importantly I feel confident with the pace. Today we tried the softer tyres and the times dropped significantly, but we need to finalise some set-ups and I think we could be even more competitive. We used the two bikes with slightly different set-ups and this allowed us to collect important information that will now be evaluated in order to understand how to exploit our potential even better for tomorrow’s qualifying, because I feel there are still some margins. The objective now is to keep the performance consistent and aim for the second row in order to be immediately competitive.”

“It’s a pity I missed the Q2 by only 0.015s but I’m happy with the improvements I could do. Since yesterday we made a huge step forward, my lap-time is better than one second from yesterday and my feeling has improved a lot. Unfortunately, we had some minor technical issues with the machine, otherwise I could probably be in the top-10 because I feel we we’re making positive progress. Now I feel more comfortable with the front and this allows me to be more effective. We still have some time to study some improvements and tomorrow I will do my best to do a good Q1 and get into the Q2 to find a good place in the grid.”

GP of Qatar – Classification after FP3: