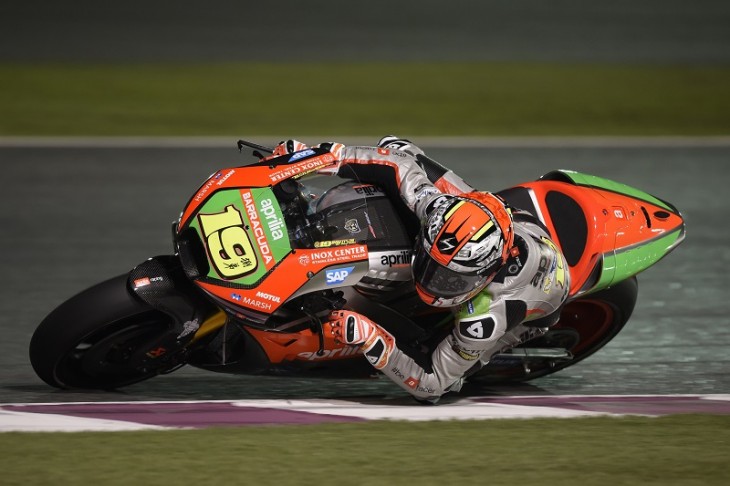 SIXTH ROW FOR BAUTISTA WHO IMPROVES HIS TIME EVEN MORE, SEVENTH ROW FOR BRADL

Losail (Qatar), 19 March 2016 – In his first qualifiers with the new Aprilia RS-GP, Alvaro Bautista continued the constant process of improving his lap times. In fact, he finished with 1’56.595, which is his best time since the start of the weekend where he has been consistently improving in every session. His performance, although marred by a crash, earned him the sixth row on the starting grid for the GP that will open up the 2016 championship season.

The same result was not to be for his teammate on Aprilia Racing Team Gresini, Stefan Bradl, After improving steadily until yesterday (1’57.069), Bradl was unable to repeat the performance and, also hindered by a crash with no serious consequences in FP4, he finished the qualifying session with 1’57.216, a time that places him on the seventh row. Now the focus shifts to the races tomorrow, when Bautista and Bradl will need to rely on a good race pace – taking advantage of the warm up session to achieve it – in order to improve on their performance during practice.

“Today we continued with our programme, making a few changes during FP4 to try and improve. We are fairly confident with our race pace. We have reached a set-up level that allows me to be rather consistent lap after lap. Especially in terms of the electronics, we have been working well over the past few days. In qualifiers we changed our strategy compared to last year because I need a few laps on the new tyres in order to be fast. So I started with used tyres and we had planned to be on the track for the entire session. It was a shame about the crash. Unfortunately, when it comes to shaving of a few tenths I still don’t have the right feeling with the bike. Physically I don’t have any problems. I’m confident about the race tomorrow. Our primary goal is still to go the full distance”.

“This was not our best day of the weekend. I was following our practice plan and I was improving, but unfortunately the crash in FP4 stopped me. I’m not really sure what the problem was, but in any case I didn’t suffer any injuries and the bike was also sorted quickly. What we’re still missing and what we need to find, is that feeling when I’m pushing to the limit, as well as a certain operational stability with the electronics when conditions change. The positive side is that tomorrow we can only get better. The more laps we put in the more we learn about the new RS-GP”.