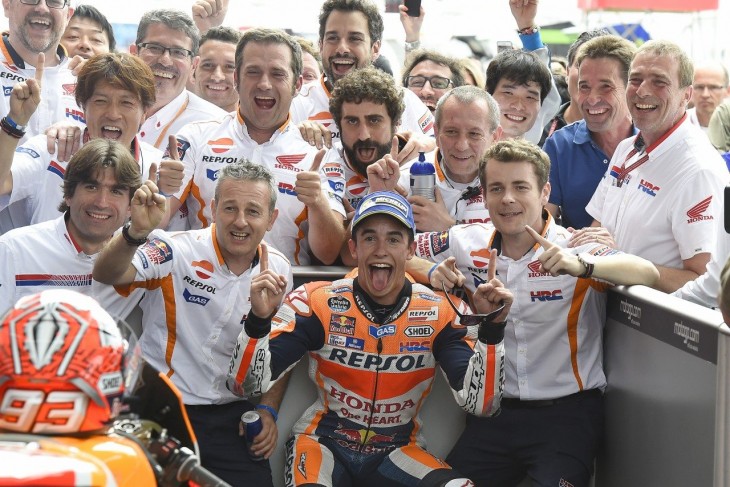 Round 2 of the MotoGP championship was held in Argentina earlier today under somewhat complicated circumstances. Due to a problem that resulted in a Michelin tire used by Scott Redding (Ducati) during practice de-laminating, the race required riders to change tires (or bikes) between laps 9 and 11. Although none of the tires appeared to fail during the race, there were several crashes.

The winner of Round 1, Jorge Lorenzo (Yamaha), got the holeshot, but quickly faded to 7th position before crashing out just prior to the tire/bike change. Marc Marquez (Honda) and Valentino Rossi (Yamaha) battled closely at the front before changing bikes on lap 10.

After the changeover, Marquez (who had saved his better bike for the second half of the race) quickly gaped Rossi, who was then caught by Suzuki’s Maverick Viñales and the two factory Ducatis ridden by Andrea Dovizioso and Andrea Ianonne. After Viñales crashed out of a podium position, both factory Ducatis passed Rossi and appeared set to take the 2nd and 3rd spot on the podium behind Marquez. Two corners from the checkered flag, Ianonne aggressively dove under his teammate and low-sided, taking both Ducatis out and handing second place to Rossi. Dani Pedrosa (Honda) was well behind the leaders, but was gifted third place as a result of several crashes in front of him.

Marquez now leads the points. For additional details, results and points, visit the official MotoGP site. Here are the results: