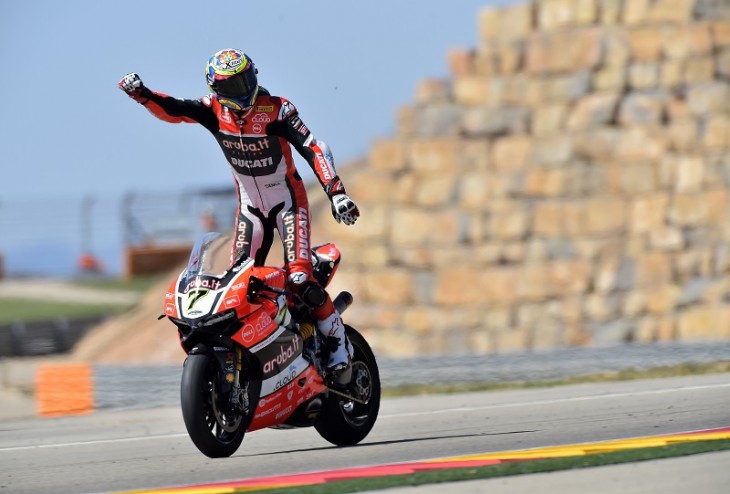 The Aruba.it Racing – Ducati team stepped on the top of the podium again with Chaz Davies in Aragon, where the Panigale R took its maiden WorldSBK win,

Starting from fourth position, the Welshman quickly pulled away from the field after posting a best lap of 1:50.421 (the new track record) in the early phases, seizing the victory with a four-second advantage over his closest opponents. Davide Giugliano also gave a gritty performance after qualifying in sixth position. Despite a few setup issues, the Italian fought for the virtual podium at length, taking fifth place across the finish line ahead of the Race Two.

Chaz Davies (Aruba.it Racing – Ducati #7) – 1st
“In the beginning it wasn’t easy to fight in the group, but I gradually managed to climb back through the field and take the lead. Then, I simply tried to establish my own rhythm, progressively building a gap. I’m very happy, we’ve made a clear step forward in terms of power, for which I want to thank Ducati for the constant efforts to push development forward. We’ve been close to winning a few times already this year, and now we need to stay on this course. We can still improve before Race Two tomorrow.”

Davide Giugliano (Aruba.it Racing – Ducati #34) – 5th
“Unfortunately, so far I’ve struggled more than I expected here in Aragon. It wasn’t an easy race, but the good thing is that we fought until the end, collecting a fifth place. It’s not the result I’m aiming for, but we still collected important points for the championship and have time to make adjustments and do better in Race Two. The technical upgrades brought here by Ducati are a further source of motivation, and I’m sure that we’ll manage to take full advantage of them.”

Stefano Cecconi, Team Principal and CEO of Aruba S.p.A
“We already had beautiful memories at this track, and now it became unforgettable. I want to thank the riders, team, and Ducati from the bottom of my heart for the unyelding efforts that allowed us to improve race after race. But, we don’t want to stop here, so we’ll try our best to step back on the podium tomorrow with both our riders.”

Ernesto Marinelli, Superbike Project Director
“We finished Race One with a strong result, Chaz rode at his best on a track where he has always made a difference. I’m also pleased with the fact that Davide managed to solve most of the issues he faced during practice, now he only needs to tweak a few things to improve in corner exit, where he struggled the most today. The team worked superbly, but credit is also due to all the people in Ducati who, in the last three months, pushed forward with the development to bring us technical upgrades that resulted in a decisive step forward. We’ll try to make further strides before Race Two tomorrow.”