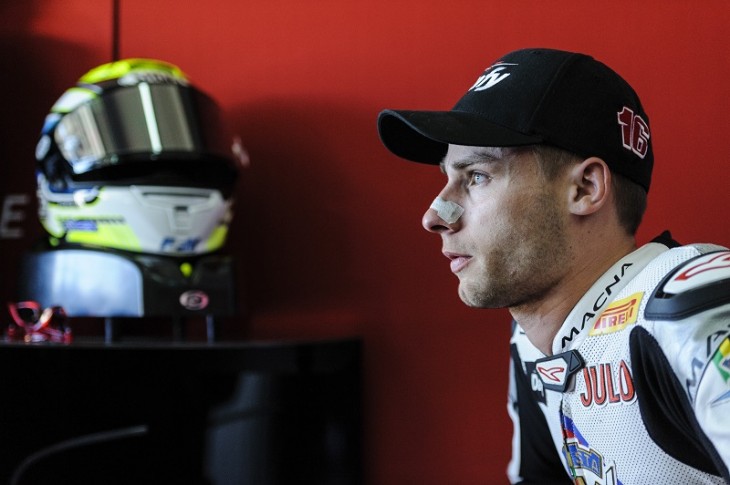 After a stunning opening day at MotorLand Aragon, which saw Jules Cluzel and Lorenzo Zanetti finishing 1st and 3rd in WorldSSP free practice and Leon Camier entering the WorldSBK Superpole 2, the actions got under way this Saturday morning on the fast Spanish track.

In WorldSBK Leon Camier continued to impress, especially in the Superpole session, where he closed the gap to the leading riders getting the 7th position on starting grid. The race as ever took place a few hours later with the talented MV Agusta rider who immediately started fighting with the front riders. Unfortunately his MV Agusta F4 RC suffered a technical problem and he had to end his race after 10 laps.

Tomorrow Leon and MV Agusta Reparto Corse team will be back on track at 13.00 local time for the second and final race of the weekend.

Early in the morning the WorldSSP riders were on track for the FP3 and the MV Agusta riders worked hard to fix some little glitch to their bike. In Superpole 2 Jules Cluzel gave his best to repeat the great performance of the previous day and in the end he placed 3rd, ready to start this first WorldSSP european race from the front row. Lorenzo Zanetti qualified in 6th position and he will start his battle in second row, right behind Cluzel.

Leon Camier #2 – We changed a bit the clutch setting for this race and it’s working better. The first laps of the race I struggled to stay with the pace and I tried to catch the group in front and we were very close to the top of the race. Unfortunately something went wrong with the bike and the team is now figure it out. I stay positive and I am confident tomorrow we can fight again for the top position.

Jules Cluzel #16 – It was a quite strange day because yesterday I was always on top and today I struggled a little bit more. More or less we figured out a solution and we are already back to work to be competitive, starting from tomorrow’s race. The 3rd placement is for sure a positive result and I will do my best for the race.

Lorenzo Zanetti #87 – Despite I am not satisfied with the 6th place, I am very confident we can have a great race tomorrow because I have a good pace. Today in qualifying I could get a better placement if I had not encountered traffic during my fast lap.