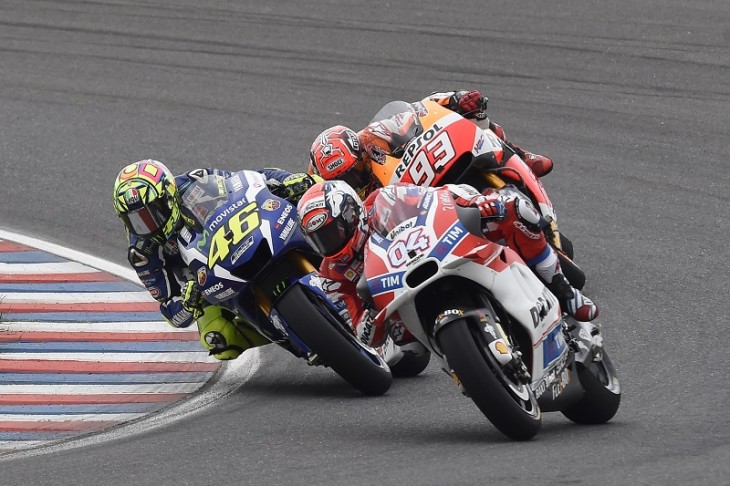 The Ducati Team riders threw away a certain double podium finish in the GP of Argentina, held today at the Termas de Río Hondo circuit. Dovizioso and Iannone were in second and third place on the final lap, but an attack by the rider from Vasto on his team-mate two corners before the finishing line caused both of them to crash out. Dovizioso was able to push his bike across the line and was classified in thirteenth position.

The race was held in dry conditions, with a particular flag-to-flag format that included a mandatory bike change between laps 9 and 11.

Dovizioso, who powered away well at the lights, led for the opening two laps, and then stayed in the leading positions until coming into the pits to change his bike on lap 10. On returning to the track, the man from Forlì was then involved in a terrific scrap with Rossi, Viñales and Iannone and he was able to move into second place on the 19th and penultimate lap, before the incident that deprived him of a well-deserved runner-up slot.

Iannone, after not a particularly brilliant start, managed to move up to fourth place and was fighting in the group together with Dovizioso and Viñales. After returning to the pit-lane to change bikes on lap 9, he then continued his recovery and reached third place by lap 18. On the final lap Iannone made a passing move on his team-mate, but the bike slid away from beneath him, accidently causing Dovizioso to go down.

Andrea Dovizioso (Ducati Team #04) – 13th
“I am very disappointed because we did a great race despite it being a complicated weekend for everyone. In qualifying we went well, in the race I was running up front and in my opinion the strategy was a good one. I even changed bikes at the right moment, staying out a lap extra and making up a few seconds. In the last few laps we were in a bit of difficulty, but we managed to catch Valentino, and I tried to close all the doors during the final lap. In the penultimate corner however what everyone could see happened and I missed out on a certain second place. Looking at things positively, we were also quick here in Argentina and, if I had managed to finish the race, now we would be second in the championship just one point behind Marquez.”

Andrea Iannone (Ducati Team #29) – DNF
“Even though I didn’t manage to get a good start, I was doing a good race: for sure I could have been quicker in the early stages, but when I changed bikes I started again at a better pace than the riders ahead of me, and I managed to pass Rossi two or three times, until Andrea passed us again on the last lap. When I arrived at the penultimate corner, I lost the front and brought down Dovizioso in the crash. Unfortunately that’s the way it went and I am really sorry for my team, for Andrea and for everyone in Ducati because for sure a podium today with both Ducati Team riders would have been an exceptional result.”