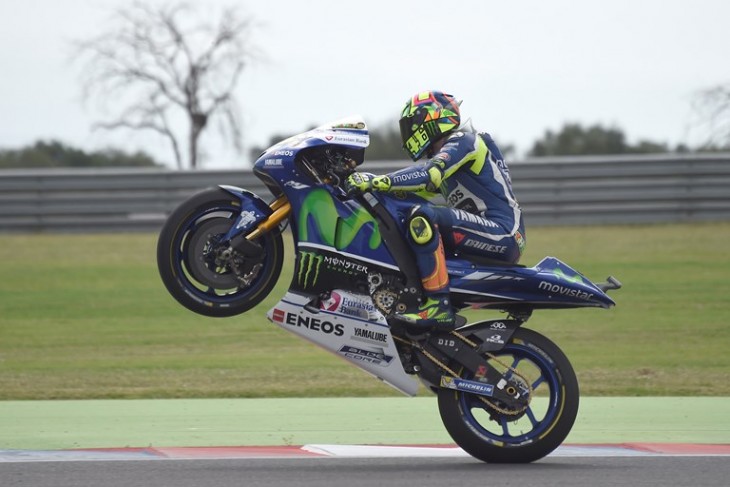 Movistar Yamaha MotoGP’s Valentino Rossi and Jorge Lorenzo made a step during a tense second day in Argentina. Rossi waited until after the chequered flag went out to take second place on the starting grid at the Termas de Río Hondo Circuit. Teammate Jorge Lorenzo continued his impressive pace from the third free practice in the afternoon and rode his Yamaha YZR-M1 to a third place starting position for tomorrow’s Gran Premio Motul de la República Argentina.

Tension ran high in the paddock today as the fourth free practice session was red-flagged and re-started twice, due to safety conditions after Scott Redding had an incident whilst riding with the softer option, medium rear tyre.

Rossi used the delayed final minutes of FP4 to get back into rhythm again, in preparation for the time attack during the ‘Qualifying 2’ session, which was pushed back by a little more than half an hour.

The Doctor bided his time at the start of the qualifying session to avoid traffic. The nine time World Champion soon dropped a 1’40.791s to move up to fourth position. Unable to improve on his second try he was pushed back to eighth place, but he soon responded by picking up the pace. Riding on the edge, he was one of just three riders to dip under the 1’40s mark with a 1’39.988s lap for second place, before quickly returning to the box with five and half minutes remaining.

One and a half minutes later he was back on track to pick up the pace. Though Rossi didn’t beat his personal best time thus far on his fourth flying lap, he kept his head down. Having been pushed back to third by teammate Lorenzo after the chequered flag came out, he set a 1’39.786s on his final attempt, cutting the margin to the man in pole down to 0.375s as he returned to second place.

When the FP4 session was restarted for the second time, teammate Lorenzo headed out for the final four minutes of the session, but a slide down the track in turn one meant he was forced to start ‘Qualifying 2’ on his second bike.

Despite the earlier commotion the Majorcan kept his trademark focus when the 15-minute qualifying session kicked off. He was the first rider to come out of the box and needed little time to put the hammer down. His first hot lap was a 1’40.574s for provisional second place and he immediately returned to the pits for a fresh rear tyre with more than nine minutes left on the clock.

The current World Champion was pushed back to fifth and found a clear space on the track for his second attempt to improve his starting position. Dropping a hot lap of 1’40.140, he shot up to third place in the standings to make a second stop with four minutes of the session remaining. A little more than a minute later he made his way out of pit lane and had just enough time left for a final try. At the time holding fourth place, he dropped a hot lap of 1’39.944s to reclaim third position, 0,533s off the front.

Tomorrow the Movistar Yamaha MotoGP teammates will continue the action at 10:40 – 11:00 (local track time) in the morning warm-up session, followed by the race at 16:00.

“Today was challenging because it was filled with many questions about the settings, grip provided by the tarmac and tyres allocation. We got positive feedback since the beginning of FP3 so we could improve consistently throughout qualifying. Valentino and Jorge did a really good job today, being continuously fast in all the sessions. Even though they had different strategies for qualifying they both set good times and considering the issues we had yesterday, a double front row start is a very satisfying result. The solid teamwork paid off and we still have the opportunity to better the set up for tomorrow. We still have to decide on the tyre we will use for the race based on further information that we might receive from Michelin. We expect a hard race but we have the pace to be competitive at the front so it should be an exciting battle to watch.”

“Last year in Qatar and also here in Argentina the qualifying was bad, but on the other side the races were fantastic. Now we have done a good qualifying, but the race will be tomorrow. Anyway I’m quite happy because we worked well on the bike and also the track improved a lot today, we can push more and also have a good pace. I think battling with Marquez will be hard because he is faster, but I’m not so bad and the most important thing is to fight for the podium and make it a good race. About the hard rear, we need to wait for Michelin’s decision and try to understand which tyre we should use.”

“Today we got a better day overall and we could make some important improvements with the set up and especially the track improved a lot so we had a very good first session. Unfortunately in the afternoon during FP4 a tyre issue put the session on stand by, due to the red flag and after that I crashed so we lost the opportunity to swap the bikes in the qualifying, but despite this the first row was the main goal and we were able to achieve it so I’m quite satisfied. Let’s see what happens with the tyre allocation for the race, but I think we are ready to fight. I would like maybe to use the medium tyre. If we have to ride with the harder option we will have less grip but we will do well.”

Monster Yamaha Tech3 Team rider Pol Espargaro will charge from 10th on the grid after pulling off a resolute qualifying campaign at the Autodromo Termas de Rio Hondo. The 25 year old started his day by just missing out on QP2 by 0.070, yet, he remained fully focused and leapt into gear when qualifying one began. Here, he confidently posted a best lap which clinched 2nd and saw him safely through to the proceeding shootout. When QP2 began, the Spaniard surged forward and after gathering pace, he eventually scored a time that left him only 0.382 from the second row.

Meanwhile, Bradley Smith will commence the second round of the 2016 World Championship two places behind his teammate after producing a determined effort in Argentina. The young Briton kicked off today by finishing FP3 in 13th, yet he forcefully topped the time sheets in Q1 with a time of 1’40.552 that allowed him to graduate straight through to the second practice. Here, Smith pushed onwards and set his personal best on the third lap, but his hopes of cutting this time further were halted when he fell at turn 1, in the final minutes of the session. However, the British star aims to undertake a rocket start tomorrow and join the battle for the top independent bike position in what will be a challenging race in the 25 lap Gran Premio Motul de la Republica Argentina.

“Today I can’t be too pleased with the final result because we were aiming to qualify higher up the field, but at the end of the day, 10th is not bad when you consider how challenging the track was. Of course, if I set a lap time that was only one tenth quicker, I could have been on the row in front, which was my target, but a lot of riders crashed and the important thing for me is that I did not. It would have been very risky, so now we will have to make the most of it and move forward in the race tomorrow. For sure, many things will change; the grip as well as the temperature and 25 laps is a long time, therefore we will see what happens. However, we still have some more work to do and we will use the warm up to retest a few factors and then make a decision about the tyres. In any case, my aim remains to fight in and hopefully win the top independent bike battle.”

“All in all, it was a bit of a disappointing QP2 after the successful session that we had before. The team found a few small changes at the end of FP4 which we used in qualifying and which helped us to make a good step. I did a really good job in QP1, so I was confident for the later practice, but I didn’t get to take advantage of the hard rear tyre in the final part. This was due to the fact that I locked the front going into turn one. It’s not anyone’s fault but I was just trying to push a bit too hard and I lost the front. It’s a big shame because if we look at the ideal lap times from both qualifying sessions, it’s clear to see that we could have been on the third row, which would have made everything easier for the race. However, it didn’t happen so we must ensure that we get a good start. The GP will be long and the tyres will play a critical part, but above all, I must not make any mistakes and find a good rhyme to feel comfortable with as I want to finish strongly.”