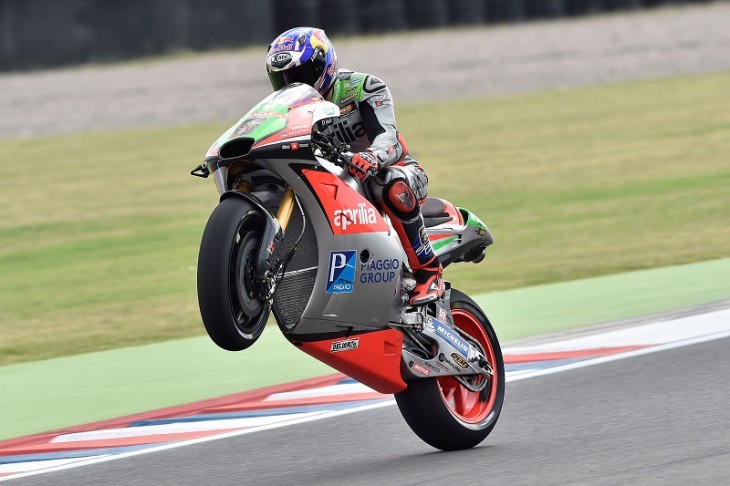 The drop in temperature the riders had hoped for came about, but only in the morning sessions at Termas de Río Hondo. In fact, during the qualifiers that decided the starting grid order, the Aprilia Racing Team Gresini riders had to deal with conditions much like yesterday, with very little grip.

Despite the slippery asphalt, Stefan Bradl performed well in the qualifying session, managing to be incisive on the flying lap and earning the first spot on the sixth row. In addition to the final result, the time of just under two tenths that separated him from the second fastest time in Q1, which would have sent him through to Q2, is definitely worth a mention.

Alvaro Bautista was a bit farther back, unable to find the right feeling in the decisive laps, finishing on the seventh row. For the Spanish rider the goal for tomorrow will be to build on the hard work done thus far in terms of race pace.

ALVARO BAUTISTA
“The qualifying did not go as I had hoped. This morning we made a few changes that I liked and I had a good pace. In FP4, on the other hand, with the higher temperature I couldn’t find the same feeling. I struggled quite a bit with the rear and stability. I expected that I would be able to go faster in qualifying, but in any case we need to remember that we’re discovering a new bike little by little so the sudden change in conditions between the morning and the afternoon created some problems for us. We have a lot of work left to do. The race is tomorrow and we need to improve the feeling as much as possible”.

STEFAN BRADL
“This was definitely the best day so far with the new RS-GP. We made a lot of progress compared to yesterday. We know we could be faster if we got all the small details sorted. It was in FP4 that we made took the important step forward, especially where the electronics are concerned and wit a change to the rear shock absorber. In the qualifiers our strategy of using two rear tyres paid off. I was able to get a good lap in. Now we just need to see what the decision will be for the tyres. We’re quite ready, but if we’re forced to use the hard tyre it would be a shame since we haven’t tried it”.