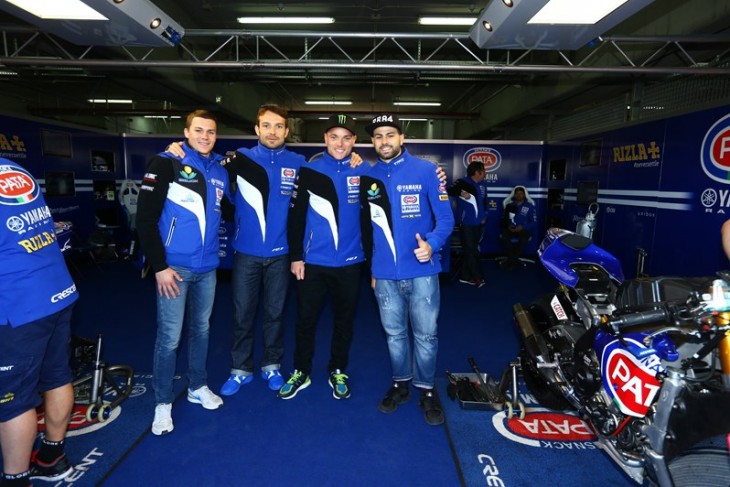 Sylvain Guintoli and Alex Lowes began their Spanish Saturday in sensational form as Superpole got underway at Motorland Aragon this morning. Qualifying in second and third respectively, the Pata Yamaha Official WorldSBK riders lined up on the front row for the afternoon race.

A poor start by his standards saw Lowes find himself running sixth as the weekend’s first battle began. Regrouping and fighting hard, the British rider was unluckily run wide by a competitor resulting in his demotion to 13th. Never one to back down, Lowes pushed hard to regain the lost ground, taking positions quickly as he fought his way back to eighth despite diminishing tyre-life, the eight valuable points boosting his championship position to 12th. Pata Yamaha will now utilise the 18 laps of race data to allow Lowes to continue his fight in tomorrow afternoon’s contest.

An impressive start saw Guintoli capitalise on his front row qualifying, running second as the opening laps unfolded. Sticking to the wheel of the leader, the Frenchman fought hard to maintain position before impending tyre-wear issues took hold. Slowly losing places to the group around him Guintoli closed the race in ninth, adding seven points to his tally and retaining his fifth position in the standings.

The Pata Yamaha Official WorldSBK Team returns to Motorland Aragon tomorrow for the concluding WorldSBK race of the weekend at 13:00 local time.

“Today was a more positive day than yesterday and it’s clear that our outright pace is good after the performance in Superpole. We still need to work on keeping that pace over race distance, but everything is still very new. We’ve highlighted a few areas we can improve on for tomorrow and hopefully we can take a couple of steps in terms of keeping our pace up. It’s been a positive day and it’s important to remember that it’s still only the third race event of the year and we’re already proving the potential of the bike – with our qualifying result – is really high. We need to keep working hard but we’re hoping to make another step tomorrow, maybe not to win but to get closer to the front group!”

“Today had some very good points, we managed to show that on new tyres and on the qualifying tyres there is a lot of potential in the YZF-R1. The lap time in qualifying was very good and then in the race we started very well. We are improving the feeling with the clutch and the starting procedure. I got a very good start in race one, had really good pace and felt comfortable and then from about lap four or five I started to lose a lot of grip from the rear and I just wasn’t able to stay with the front and keep my position. I did as much as I could but there were clearly some big imitations with the rear grip and it got worse through the race so I ended up in ninth. This is not where we want to be but we still showed potential and we know that every session and every race is information that we can use to gain experience to make the bike more efficient on longer runs, and to learn how to not overstress the rear tyre.”

“Eighth and ninth positions for our riders was frankly disappointing compared to the incredible turnaround that both the team and Sylvain and Alex made in qualifying. However, making very fast laps with new tyres and lots of grip is very different to making 18 laps and, of course, we are still behind our competitors in terms of experience and development time.

“The YZF-R1 is simply a fantastic motorcycle with absolute potential to be a World Championship contender and the only thing missing now is time. Time to refine the package, time to develop the hardware and the strategies and time bring the overall combination to the best level that it can be.

“We’ve now got race one under our belts with very clear information on where some improvements can be made in the short term and we’ll be starting at the race tomorrow with an absolute positive attitude and doing everything we can to have both riders fighting inside the top six.”