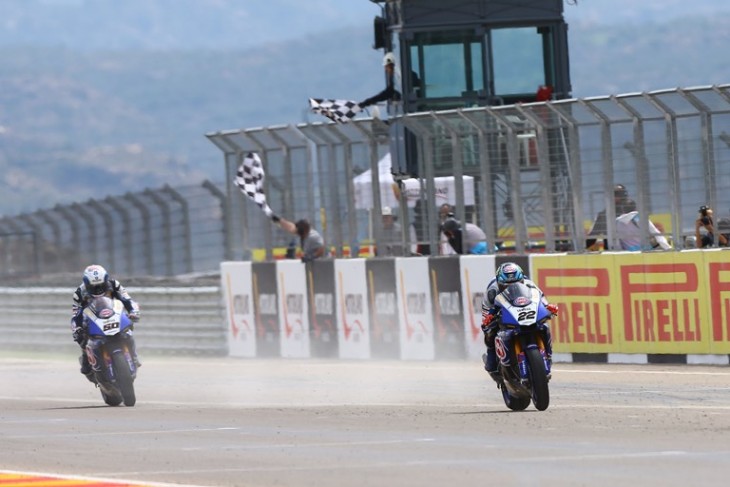 A difficult start from his P3 grid position saw Lowes initially run seventh on the opening lap, before an incident on lap six caused him to run off track. Re-joining the race in 18th he quickly picked his way back through the pack, taking five places in as many laps to sit 12th with four to go. Continuing his impressive charge, the British rider entered the top ten with two laps remaining, beating his teammate to the line in the dying seconds to round the weekend off in ninth place and adding seven points to his championship total to retain his 12th position overall.

Opting for a conservative start from his front row position in a bid to maintain his tyre-life, Guintoli began Sunday’s fight from fifth place. The strategy, however, proved to be short-lived and the Frenchman’s pace suffered as a result. Circulating in seventh for the majority of the race, he succumbed in the closing stages, collecting tenth position and six points at the flag to leave the weekend sitting in sixth place in the standings.

The Pata Yamaha Official WorldSBK Team now move back to northern Europe as the World Championship travels to Assen, in the Netherlands, for the next race on Saturday 16th April.

“Today was ok actually. I’ve learnt a lot on the bike this weekend and feel I’ve made a step forward in terms of my riding the YZF-R1. The second race, apart from a few problems at the start – which as a team we need to learn from – I actually rode very well. We had some small goals in terms of lap times if the race was in similar conditions to Saturday, which it was, and I managed to reach those goals. My second half of the race performance was also much better than yesterday, so plenty of positives. Obviously the results are not where they need to be but we’re learning, it’s only our third race weekend on the bike and it only would have taken a couple of little things to go our way and it would have been a different result. It may not show on paper but really it’s the best weekend we’ve had and we’re a bit closer to the podium fight so I’m looking forward to Assen!”

“We tried a very different solution with the chassis and the electronics for race two but the end result was very similar. The end of the race we struggled a lot for pace, this time I was a little more conservative at the start but it just didn’t work out. So a very difficult couple of races for us, but the fact that Aragon is very hard on tyres highlighted the fact that we need to work to get more performance out of the bike with the used tyres. In Superpole with both the race and qualifying tyre we showed some very fast pace, so we have to try to match that now during the races with low grip. That’s the aim as we get back to work and look to make the next step.”

“Really it was a similar story to yesterday’s race here at the Aragon circuit today but some very encouraging signs again to the potential lurking in the YZF-R1 in WorldSBK-trim. The changes made for Sylvain and the way he tried to look after the tyre at the start of the race unfortunately didn’t work out into a better result but it’s more solid points, a lot more experience and another step in the development for the bike.

“Alex had a strange race, experiencing difficulties to enter the corners for the first five laps but thereafter adapting to find pace and settling into an excellent rhythm that saw him climb from 18th position to ninth at the flag – and race pace that could have seen him fight for fourth place. The team and Yamaha will take the lessons learnt from the weekend but also reflect on the positive potential of the YZF-R1 as demonstrated by the qualifying pace and the improvements made, especially with Alex’s rhythm, in the second race.”