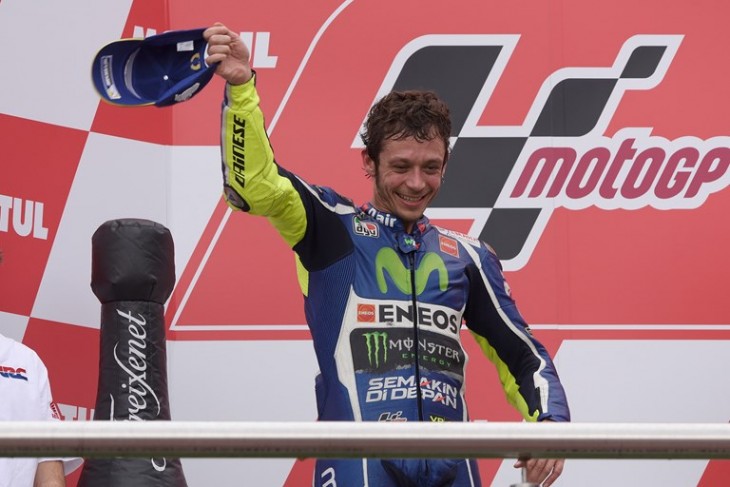 Movistar Yamaha MotoGP’s Valentino Rossi had to give all he had to take a solid second place in a drama-filled Gran Premio Motul de la República Argentina. Teammate Jorge Lorenzo had a promising start to the second race of the season, but was unable to finish the shortened “flag-to-flag” sprint after he got caught out by the tricky conditions.

Movistar Yamaha MotoGP’s Valentino Rossi took home his first podium of the season today in a difficult race. Teammate Jorge Lorenzo got off the line well, but his “flag-to-flag” sprint ended after five laps.

The third day at the Termas de Río Hondo Circuit was filled with drama before the Gran Premio Motul de la República Argentina race even got underway. The scheduled ‘extra’ 30-minute morning warm-up session was cancelled when rain tormented the South American circuit. The change in conditions compared to the first two days meant the tyre allocation was amended to best suit the race situation.

While the ‘standard’ warm-up took place under wet conditions in the morning, the shortened race got underway on a mostly dry track with treacherous wet patches. A compulsory stop to change machines at the end of lap 9, 10 or 11, allowed the riders to use either the medium or the hard rear slick tyres that they had used on the Friday and the Saturday, as long as they were used with the minimum tyre pressure advised by Michelin for this race.

Despite threatening clouds, the Doctor flew from second place on the starting grid and took fourth going into the first corner. It took him little time to overtake Marc Marquez and teammate Lorenzo to chase down leader Andrea Dovizioso. The scrap between the three front runners had the fans on the edge of their seats for several laps until Dovizioso lost touch, turning the fight at the front into the duel all racing fans had hoped for; a head-to-head battle between Rossi and Marquez.

The pair swapped positions multiple times until it was time to swap bikes. They came in simultaneously at the end of lap 10 with nothing between them as they entered pit lane. Rossi jumped to his second bike without any problems and was eager to continue the fight for first, but more drama was on its way.

When the Italian rider re-entered the track he was held up by Tito Rabat, who had yet to do his compulsory stop. Rossi had his work cut out for him as the slight disruption created an over four-second gap and he struggled to get used to his second bike. With five laps to go he was joined by Maverick Viñales, Andrea Iannone and Dovizioso, but the Doctor wasn’t going to give up his second place that easily. Making his Yamaha YZR-M1 as wide as he could, he held off Viñales, who was unable to keep up and crashed in turn one with three laps to go. Still being chased by Dovizioso and Iannone, Rossi defended his podium position tooth and nail. However, he was unable to fend off the attacks and was lying in fourth place when his rivals collided in the final corner of the last lap, allowing him to cross the line in second place, +7.679s from the front.

Teammate Lorenzo had a lightning fast start from third position as the lights went out and grabbed the holeshot, but fell back to seventh place as he took time to get heat into his tyres. With sixteen laps to go he decided it was time to put the hammer down, but his attempt to claw his way back to the front of the field ended with a crash in turn one a lap later when he was caught out by the tricky conditions and was unable to continue the race.

Rossi’s 20-point score increases his points total to 33 in the championship standings and enabled him to climb up to second place. Despite not taking home any points, Lorenzo still holds fourth position after two rounds with 25 points.

“It has been a very tense day as the race format was changed this morning following a meeting with Michelin and Race Direction. The team did a great job prepping both Vale and Jorge for these challenging race conditions. Due to the rain yesterday the track conditions were unpredictable, and the compulsory pit stop, like we saw before in the 2014 race at Phillip Island, made the strategy a gamble. Vale was very strong for the first part of the race. Unfortunately his pace on the second bike didn’t quite match that level, because he didn’t get the same feeling from it. Under such challenging conditions his experience made the difference; he rode a solid race from the beginning and he never gave up, till the very last corner. The second place is fully deserved. It was a pity that Jorge wasn’t feeling very confident at the start of the race and got caught out by the tricky conditions when he hit a wet patch in turn one. Luckily he walked away unhurt and I’m sure he’ll be back on form again at the upcoming race at Circuit Of The Americas next week.”

“I was very happy to do the second part of the race because I was able to have a good battle with Marquez during the first part when I was strong and we started to overtake, but with the second bike I had big problems with the rear tyre, I didn’t have any feeling and couldn’t stop under braking. The conditions were very difficult after the rain last night and we were back where we were on Friday when we were struggling quite a lot with our bike, so these 20 points are very important and I’m very happy for me, Yamaha and all the team because it’s the first podium of the season, it’s a good result. I was pushing and very close to the limit. Iannone overtook me a bit too aggressively and in that braking point his action was too strong and it was impossible to overtake so I went wide and he passed me. I said to myself: “Now what happens?” I tried to counterattack, but I didn’t have enough grip or speed to make a move, so I stayed behind him and when I saw that Iannone tried to improve his position and go under Dovizioso, he unfortunately couldn’t stop and took out also Dovi, so I was very lucky to arrive in second place.”

“It was a weekend to forget. We had problems during the practice sessions and finally we got a first row in qualifying and a good start, but with these conditions and wet patches in some corners I wasn’t comfortable. I think it was my fault. As a rider I didn’t feel comfortable enough to stay in the first group and I saw them risking so much. I made a mistake in the first corner, which was more complicated, it was the corner with more wet patches and I went in a little bit too wide on this particular lap and just lost the front and couldn’t continue. This is racing; sometimes you win, sometimes you lose. You have to accept it and think positive, just forget this race and think about the future.”