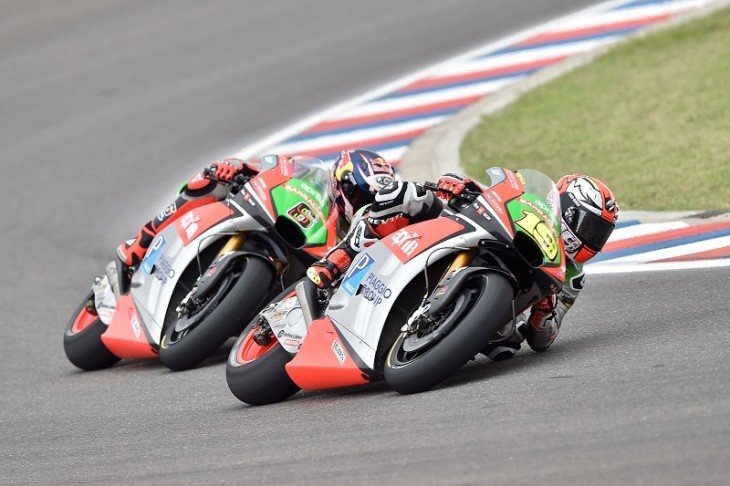 WITH A SEVENTH PLACE FINISH STEFAN TAKES THE BEST PLACEMENT YET FOR THE RS-GP. TENTH PLACE FOR ALVARO

At the end of an extremely tight race full of unknowns – from the weather to the tyres, the Aprilia RS-GP machines take home their best placement yet and, even more importantly, they continue improving, confirming excellent reliability for such a young project.

On a day marked by extreme conditions that took several bikes out of the race, the Aprilia Racing Team Gresini interpreted the race to perfection. In the first part of the race, before the pit stop, Alvaro Bautista’s pace increased lap by lap, allowing him to make up positions until arriving eleventh. Unfortunately, a misunderstanding with another rider on the first corner, in the lap when he was due to re-enter pit lane, caused him to crash and forced him to ride a comeback race. The compulsory stop was also not particularly fortunate for Bautista, who slipped in front of the garage on the damp cement. Back on the track, the number 19 bike set up a shrewd second half of the race on a treacherous track, finishing tenth.

Stefan Bradl rode an incredible race. After a less than perfect start, the German rider then demonstrated great focus. After determining the difficult track conditions, Stefan maintained a constant pace until the bike change, timed perfectly, managing to overtake a couple of riders at the same time. Once back on the track, Bradl decided to maintain his position without taking any pointless risks, in any case (and thanks to a few DNFs) achieving an excellent seventh place finish which is the best result yet for the Aprilia RS-GP.

ROMANO ALBESIANO – APRILIA RACING MANAGER
“This was a weekend full of encouraging signs for us. In terms of performance, the first part of Alvaro’s race was decidedly positive. Then the crash on the track and the incident during the bike change obviously compromised his race a bit. Stefan’s placement is the result of excellent race management. In conditions like the ones we had today it’s easy to make mistakes. Besides the result, the thing that comforts me is the improvement we’ve demonstrated this weekend. We are under no illusions, but we know that we can improve even more”.

FAUSTO GRESINI – TEAM MANAGER
“The result is a pleasant surprise, but we were consistently fast. Stefan had a great result and without the two accidents Alvaro would have been able to improve his position. Today we gathered a lot of data and identified many areas where we can improve. It’s a shame about what happened to Alvaro during the bike change. In any case, we’ll need to discuss it with the organisation. Being in too big a hurry is detrimental to safety”.

ALVARO BAUTISTA
“This was a very long and difficult day, with the schedule changed several times throughout the morning and then the decision to make the compulsory pit stop. In the first part of the race I really felt good. I got off the line well and I was battling for tenth place. Just in the lap when I was supposed to make the pit stop, on the first turn I almost made contact with another rider and I couldn’t avoid crashing. The bike was still running so I restarted straight away. Then in pit lane I was braking and went from the asphalt to the damp cement and there was nothing I could do to keep from hitting the mechanic that was waiting to take my bike. I checked to see how he was quickly and then got back in the saddle. At that point I set my sights on finishing the race and the track was really treacherous. It’s a shame because before the crash I was battling with Laverty, so I could have made a play for fourth place. Let’s just say that, all things considered, it was another positive result for me and for Aprilia”.

STEFAN BRADL
“This is a fantastic result for Aprilia, for the team and for me. The first race with the 2016 RS-GP wasn’t particularly lucky but today we redeemed ourselves. In these difficult circumstances we did an excellent job. Even the strategy of stopping straight away to change bikes proved to be the right way to go. We gained a few positions during the pit stop and I was able to be fast straight away with the second bike. In any case, it wasn’t easy to stay on the track. There were damp spots everywhere. I risked going down a couple of times so I decided to slow my pace in order not to crash. Also, the rear tyre on my second bike wasn’t giving me the same feeling, so I couldn’t push any harder. My compliments to Aprilia and the guys on my team. It was truly an incredible race”.