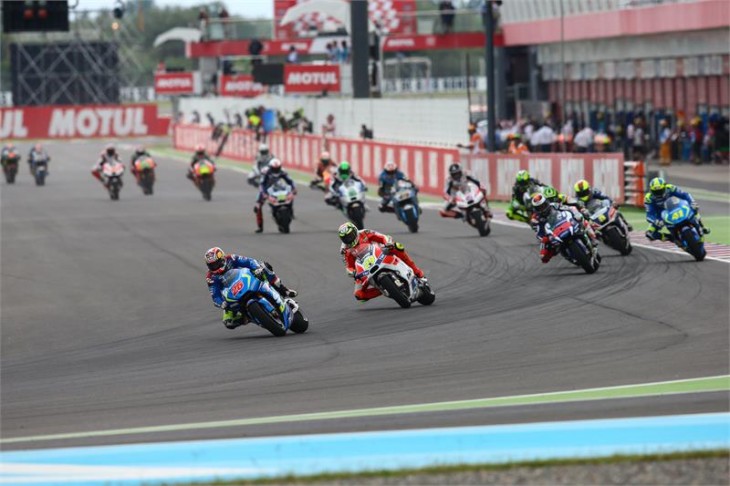 Team Suzuki Press Office – April 3. Team SUZUKI ECSTAR’s Maverick proved himself as one of the main protagonists of the 2016 MotoGP™ Championship season today at Termas de Rio Hondo in Argentina.

The young Spaniard rode a brilliant and spirited race, fighting consistently early in fourth and then in third position until three laps from the end, when the only mistake he made turned into a crash that prevented him from a potential podium position.

But his improvements throughout the beginning of the season have been solid and positive; today, fighting with the top riders is a further gain in terms of experience and also a reflection of the quality of the Team SUZUKI ECSTAR MotoGP™ project.

The race today was characterised by a flag-to-flag procedure, declared dry at the start with riders obligated to change their bikes between laps 9 and 11, for safety reasons. This procedure was conducted positively by Viñales, who didn’t lose any positions and got back on the track for the second leg with renewed motivation to keep with the leading group.

Team-mate Aleix Espargaró also showed a similar strong and spirited ride aboard his GSX-RR after falling early on, but he remounting to fight back through the pack to an eventual 11th position. Espargaró went a little wide in a corner and hit a damp spot, which caused a slide and his machine reported some damages, which made his riding tougher. At the bike-changeover he exited the pit positively, but could not find back the needed feeling and also because of some pain in his arm following the crash. His experience came through, however, and he rode the second part of the race with the objective of getting to the chequered flag and gaining points in the championship.

Today’s procedure was different than usual: Following overnight rain at Termas de Rio Hondo, Race Direction changed the plans. The additional free practice session that was expected for 9:00am was cancelled as the track was wet and therefore it would have been impossible to pursue its purpose to allow the teams and riders to try the newly-introduced tyres. Riders took to the track for the usual warm-up session, and, as the track was wet, it was extended to 30 minutes instead of the normal 20. This gave the riders time to test the rain tyres and some more time for team technicians to try and find a good set-up.

“This weekend has been very difficult as the track’s conditions were very hard and changed many times. Furthermore, today the weather mixed-up things, finally forcing us to adapt to several decisions of the race commission. Finally the 10+10 laps was a strange situation but we got positive results; Aleix unfortunately crashed in first part of the race but he didn’t give up and finally ended the race getting into the points. It’s a good proof of his strength. Despite the crash, Maverick could fight within the leaders until three laps from the end and his performance was really at the top. We were unlucky but we could see the podium, this is the evidence that we can fight for the podium; and hopefully next time we will get the podium and also the victory.”

“I’m both very sad and very happy. Of course I’m sad with the final result, but I must be very, very proud of what we did. For the whole race I could fight at the top and also I felt I had the pace to overtake for the second place. After the bad warm-up, the race was going very well and it’s a pity I couldn’t finalise it. Unfortunately I hit a wet spot, going just a very little wider than the ideal line, and I paid the biggest price. It’s hard to accept the crash when you feel so good and feel you can really get onto the podium, but at the same time this is the proof that we have made a huge progress and we are now ready to fight for the top. My objective continues to be the realistic –top-six – but this weekend is the proof we can expect some highlights and for sure I will take any chances that will happen to me. We’re getting more and more experience, this will pay back in the short term and I’m confident that Austin will already be a good chance to fight again at the top.”

“It’s a real pity about the crash, I managed to make a very good start and my confidence was good, but unfortunately I went a little wider in a corner and hit a wet spot, therefore sliding away. Unfortunately in the crash my machine reported some damages, which made it very hard for me to get to the bike-change. In the strangeness of this race, the flag-to-flag procedure gave me the chance to get a fully-functioning machine and I could get back into the fight. Unfortunately, my feeling with the front tyre of bike number two was not as good as with my first bike, and I also started to feel pain from the crash, therefore I settled to a pace that allowed me to get to the finish and into the points. It’s a pity for the result but it’s good for the progresses we’ve made; since Qatar we found a renewed competitiveness and now we can look positively to the future. Austin will be in only one week and I hope after here we will make another step forward just like we did after Qatar.”