The Gogoro battery system provides one of the best platforms for the success electric two-wheeled vehicles. The swappable battery technology dominates the electric scooter market in Taiwan simply by making it easy and convenient to change out depleted batteries through a network of 10,000 battery vending machines. Just by its sheer size and general acceptance, the Gogoro system makes it unwise, at least in Taiwan, to develop a different electric scooter platform. Gogoro state that 10 companies incorporating their battery designs into their vehicle platforms  including Yamaha with two electric scooters featuring Gogoro batteries. Gogoro recently announces the production of their 1,000,000th battery. Studying the companies numbers which indicate that there are 340,000 individual swaps per day.

The recent key development, not just for Gogoro but for the entire industry involved in electric transportation, is the the release of a prototype solid state batteries. Gogoro announce the release of a lithium-ceramic battery developed jointly with ProLogium Technology, a company involved in the research, development and production of high density batteries. Horace Luke, the founder and CEO of Gogoro, stated “Gogoro is unveiling the world’s first solid-state battery for two-wheel battery swapping because it’s imperative we take advantage of the latest battery innovations to introduce a new era of electric transportation growth and adoption in our cities.” 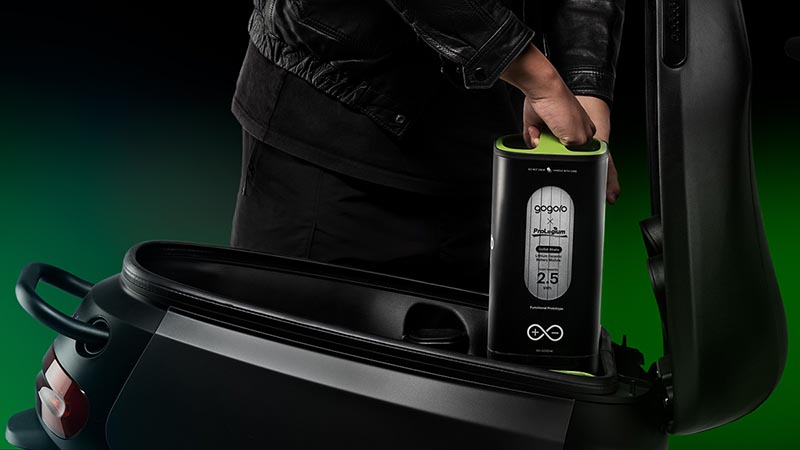 The reason why high density solid state batteries are so significant and the ultimate goal of many battery manufactures is that the technology provides more range in the the same size or smaller batteries. The high-density battery developed by Gogoro and ProLogium is the same size and shape as the 1,000,000 batteries produced by Gogoro and will work with all existing Gogoro powered scooters but is estimated to provide 2.5kWh of energy rather than the previous battery’s 1.7kWh. Voila! An instant range increase.