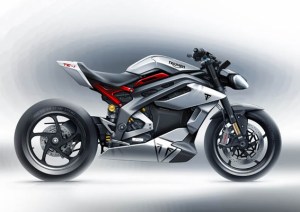 Triumph announced that the prototype electric motorcycle, the Triumph TE-1, the company has been developing in collaboration wth other UK-based firms and organizations has completed its final round of testing – known as “Phase Four” in company parlance and means getting the bike out on the track and running the numbers. The benchmark of the project in terms of conventional motorcycles appears to be the Speed Triple and the new electric bike certainly looks similar to that staple of the Triumph line-up. The specs released include power – 175hp and torque – 80lb-ft. There were acceleration times – 3.6 seconds to 0 – 60mph and 6.2 seconds 0 to 100mph. There is also talk of a “distinctive and thrilling sound” emanating from the bike’s drivetrain.

There are a couple of key take-aways from the release. The first is the claim that the battery for the Triumph TE-1 developed in conjunction with Williams Advanced Engineering can recharged from 0 to 80% in 20 minutes. A full charge is said to give the bike a range of 161km which Triumph claims exceeds the range of equivalent electric motorcycles. Second takeaway is the 220kg weight which again Triumph claims is 25% lighter than equivalent electric motorcycles. The question, of course, is what exactly are the equivalent motorcycles? The Energica EsseEsse9+RS is also a somewhat upright sporty electric motorcycle with a 107hp motor and a zero to 100kph time of 2.8 seconds and a combined city / hwy range of range of  245km. A LiveWire One has a combined range of 152km and a zero to 100kph of 3.0 seconds and 60 minute recharge to 100%. If Triumph wishes to make claims on the comparison to “equivalent” electric motorcycles in this wild west of electric motorcycles they would be doing us all a service by saying what they believe the “equivalents” are. Define the niche but don’t make it so small as to make comparisons irrelevant.

So where does Triumph TE-1 and its company partners go from here? With references to further refining the drivetrain, battery, regenerative braking and software functions for “the future of Triumph electric motorcycles” it does appear that there will be more from  the company. It is obvious from the stressed points in Triumph’s narrative that the company is seeking high performance in the electric segment and aiming for a premium niche.The four phases of development that took the TE-1 from a sketch (above) to a prototype tested on the track must have cost the company millions of quid and the effort does appear to have yielded true advances that may lead to a greater real world viability of electric motorcycle – or at least the “equivalent” ones.

The post Triumph TE-1 : Impressive But Equivalent to What Exactly appeared first on Canadian Biker Magazine.