The current World Championship leader escaped serious injury but walks away from Aragon with a zero. In a small consolation for him, Bagnaia was unable to fully capitalise because of the exploits of his future team-mate. The two Italians traded hot laps before Bastianini made his move on the 23rd and final lap and went on to score victory number four of 2022. Bagnaia closes to 10 points behind Quartararo at the top of the table – but it could have been just five with five races to go. Still, Ducati scored another 25 points towards the constructors’ championship – and it has now already won that title for another year.

Mayhem at the MotorLand

Bagnaia headed the field into Turn 1 after a dream start off pole position but it was a nightmare for several riders behind him. From 13th on the grid, Marquez was already up to sixth position when he had a moment exiting Turn 3 and closed the throttle, leaving Quartararo with nowhere to go. The Frenchman rammed the back of the RC213V and was thrown from his own YZR-M1 in dramatic fashion.

The contact left Marquez’s Honda wounded and there was essentially a repeat incident a few corners later when he was hit by Takaaki Nakagami (LCR Honda Idemitsu). The Japanese pilot’s fall sent the following riders scattering every which way but thankfully, once again, everyone missed the man who was stranded on the race track. While Quartararo and Nakagami were out on the spot, Marquez did not get much further, pitting at the end of the lap in an early conclusion to his comeback. 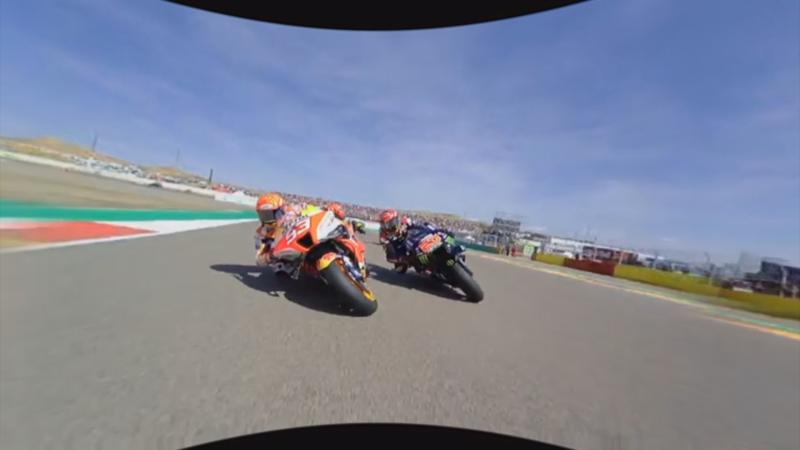 Where did Brad Binder come from?

Amid all of that, Brad Binder (Red Bull KTM Factory Racing) had jumped from 10th on the grid to fifth off the start and then somehow threaded his way past another three bikes to be running an incredible second midway through Lap 1, ahead of Jack Miller (Ducati Lenovo Team), Bastianini, and Aleix Espargaro (Aprilia Racing). Miller then overtook the South African on Lap 3 at Turn 1 and Bastianini did likewise exactly a lap later, putting the KTM back to fourth.

‘La Bestia’ continued his progress with a move on Miller for second on Lap 6 at Turn 15, before Binder executed an impressive overtake on the Australian through Turn 4 on Lap 7. In the blink of an eye, Miller was all the way back to fifth when Espargaro also got through, at Turn 7.

Bad news for one Ducati rider, then, but the Bologna marque’s future factory pairing was about to engage in combat over first position – just as they had done two weeks earlier at Misano. Bastianini got the move done at Turn 1 on Lap 9 and it looked like the Gresini rider might be able to pull away, given the pace advantage he seemed to have over Pecco. Instead, he outbraked himself half a lap later at Turn 12 and went very deep, handing the lead back to Bagnaia and barely holding off Binder through the bus stop complex.

From there, however, Bagnaia and Bastianini cleared out, their margin over Binder up to one full second on Lap 12, two seconds on Lap 18, and three seconds after just one lap more. The Bologna bullets were trading quick laps around Aragon, and there was still no certainty over who would prevail. Bastianini twice had looks at Turn 16 but thought better of it – would there be one last attack?

There sure would be! Bastianini sprung a surprise move on his works counterpart on the final lap at the tight Turn 7 right-hander and he was through. Bagnaia gave chase and when he got a better run off the final corner, it was still in the balance. Fortunately for the Gresini rider, the finish line was close enough to the exit of Turn 17 that he was able to cling on by a margin of just 0.042 seconds and turn the tables relative to what unfolded 14 days earlier at the San Marino GP. In the last two races, the total of the gaps between those two at the chequered flag is a mere 0.076 seconds.

As for the other podium position, that went to Espargaro. He and Miller would come to tail Binder for much of the contest before Aprilia’s ‘Captain’ pulled off the block pass at the start of the penultimate lap, and that was decisive. Espargaro finished six seconds behind the top two but Binder was just 0.240 seconds behind him at the chequered flag, and Miller only another 0.585 seconds in arrears in fifth.

How the rest finished

The Championship picture has been shaken up again! Bagnaia is on the march but will another rider from within the Ducati camp be a thorn in his side again? You don’t want to miss Round 16, the Motul Grand Prix of Japan, at Mobility Resort Motegi on September 23-25.