Ducati has revealed the new V4-powered Diavel as a 2023 model. Once a V4 muscle cruiser was the sole domain of the Yamaha VMax with that legendary bike fading into history a couple of years ago, Ducati appears to believe the idea is worth revisiting and decided the Diavel was fertile as yet another home for the company’s Granturismo V4 motor which produced 168hp and 93 lb-ft torque. 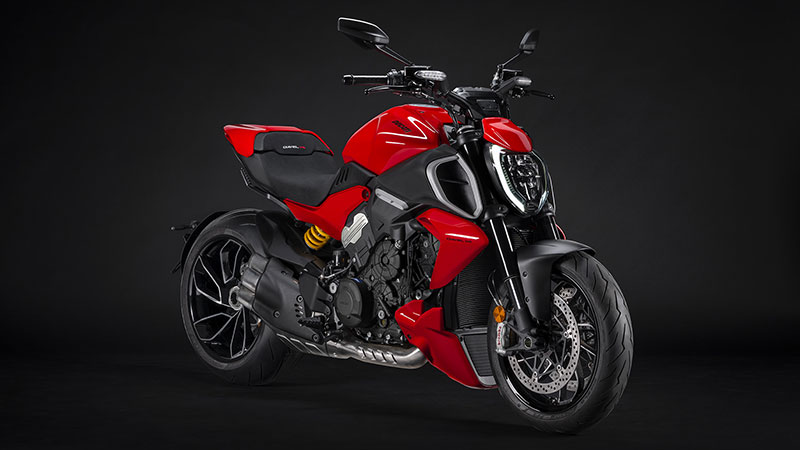 While Ducati still calls the Diavel a power cruiser, there is evidence that the bike has become more of a stretched roadster as the bodywork and appearance looks borrowed from other more sport focused bike is Ducati’s stable and the company acknowledges inspiration for the design came from the super sport bikes. But that is not a bad thing as the Diavel should handle closer to a sport bike that a traditional muscle cruiser. The longstanding  gripe against the VMax was that the bike was mind boggling good in a straight line but gave up some points in the corners. That was less so for the last generation rather than the first with it spindly front end but the Max knew what it was and generally stuck with it.

What one has to consider now is the what other bikes lie in the power cruiser segment? It is going to be a lonely place for the Diavel. The most obvious choice is the Harley-Davidson Sportster S but with the reveal of the V4 Diavel, the Sportster S might need to bump the hp a little. Other than that there isn’t much else available in the segment and it is unlikely we will see the VMax return for a third time – as much as that would be interesting.

Should the Diavel V4 look like your version of a good time, prices start at $30,795.