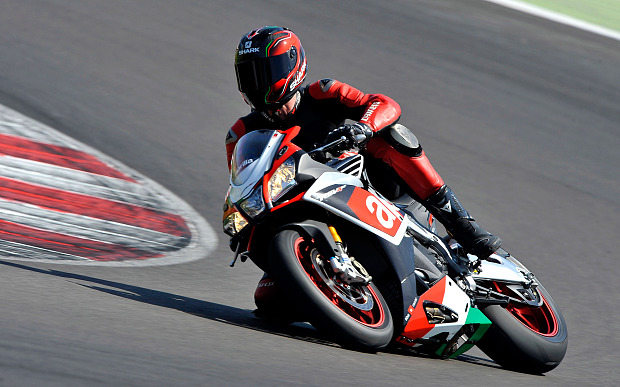 If superbike sales were a reflection of pure performance or racetrack results, Aprilia‘s new RSV4 RF would continue a long run of showroom success. Unfortunately for Aprilia, the normal rules don’t apply to the RSV4. Since its launch six years ago it has won countless magazine comparison tests and three World Superbike titles while barely making a ripple in the sales charts.

It’s difficult to judge whether that failure is due more to poor marketing, a weak sales network or simply the relatively young Italian brand’s lack of glamour compared with the likes of BMW and Ducati. But what is for sure is that Aprilia and its owner, scooter giant Piaggio, are not giving up.

The RSV4 RF looks very similar to its predecessors, except for dramatic “Superpole” graphics that make it resemble a racebike even more closely than its predecessor. And that appearance is not misleading. Of the snarling pack of machines in this remarkable year for new super-sports bikes, the RF (the F stands for Factory, Aprilia’s traditional designation for upmarket models) is possibly the most track-focused of all.

It’s also one of the most powerful, because its 999cc V4 engine is tuned to give an extra 16bhp, taking its maximum to 201bhp. Modifications include a new airbox and larger inlet valves, plus numerous parts made smaller, lighter or more efficient. As before there’s a choice of riding modes, including a new Race option designed to give a smoother power delivery. 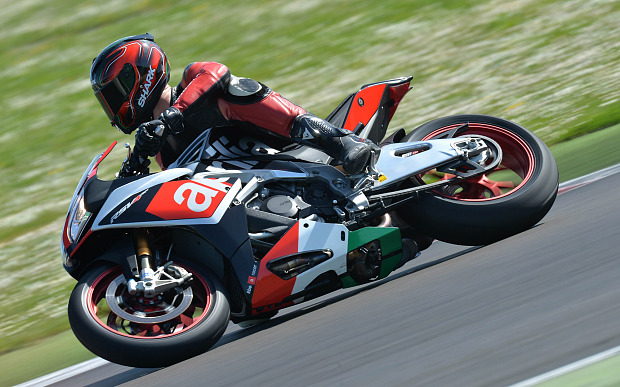 The 65-degree V4 has always been wonderfully smooth and characterful, as well as powerful, and that remains true. Throttle response is very sweet and mid-range performance respectably strong. But the real improvement is at higher revs, where the Aprilia snaps forward with even more ferocity than its predecessor, heading for its 180mph-plus top speed.

That makes the RSV4 hugely fast and exhilarating on a racetrack such as Misano, the launch venue in eastern Italy. It revs to over 13,000rpm through the gearbox almost as fast as its rider – this one, at any rate – can keep up using the quick-shifter, which works only on up-changes, unlike the ‘boxes in some rivals.

Updates to the notably compact, aluminium-framed chassis are mostly aimed at coping with the increased power. Moving the engine to the lowest point in its adjustable mounts drops the centre of gravity slightly, improving stability, as does the slightly longer swing-arm.

At 190kg the RF is very light and it handles with racer-like agility, at least once its Öhlins suspension has been fine-tuned to suit the rider’s weight. Brembo Monobloc front brake calipers give fierce stopping power, backed up by excellent ABS, although not by the cornering system of Ducati’s 1299 Panigale. 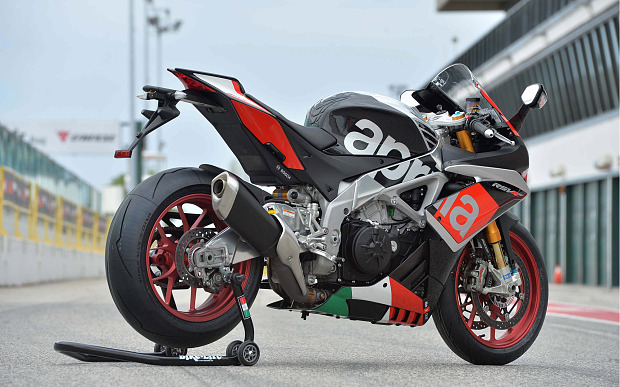 The RSV4 also lacks its main rivals’ semi-active suspension but counters with a unique optional electronic feature. Aprilia’s V4-MP, the MP standing for Multimedia Platform, is a GPS-enabled telemetry system that links the bike to a smartphone. This allows data recording and fine-tuning of traction and wheelie control for individual racetrack corners. It’s fun to use, albeit of limited benefit for most riders.

Would the RSV4 RF be an even better all-round superbike if its electronic features included semi-active suspension and cornering ABS, plus the cruise control and heated grips that are an option on BMW’s S1000RR? For anyone riding mainly on the road, surely yes. But for track use this Aprilia is every bit as competitive as its predecessors.

At £18,135 the RF is expensive but reasonably priced for a machine of such pace and refinement. Despite that it’s unlikely to sell much better than the old model, which is unfortunate. Aprilia is aiming to uprate its sales network, and has recently entered MotoGP in a bid to boost its appeal. Maybe that will eventually do the trick. Until then you can add exclusivity to the RSV4’s long list of attractions.

Verdict: Powerful, light, sweet-handling and electronically sophisticated super-sports V4 that is faster and better than ever on track but can’t match some rivals’ all-round ability

BMW’s mighty class yardstick was revamped again this year and is now better than ever. Its 198bhp engine is held in a new chassis that incorporates semi-active suspension.

This higher-specification version of Ducati’s 205bhp V-twin adds Öhlins semi-active suspension to a potent and ultra-light package that is as refined as it is thrillingly fast.

Yamaha’s limited-edition version of the impressive R1 boosts the standard 197bhp rocketship with carbon bodywork and Öhlins semi-active suspension. It has already sold out.