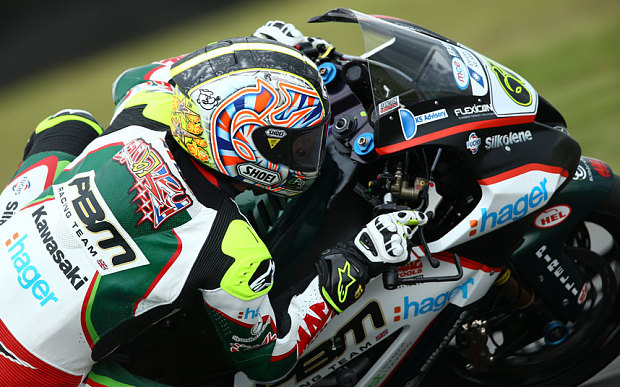 The penultimate round of the MCE British Superbike Championship takes place at Silverstone this weekend. With 100 points available over this and the season finale at Brands Hatch in two weeks, Australian Josh Brookes on the Milwaukee Yamaha has a 28-point lead over defending four-times champion Shane Byrne on the PBM Kawasaki. The only other realistic, albeit an outside, contender for the title is JG Speedfit Kawasaki rider James Ellison in third place and 41 points behind Brookes.

Once again Brookes heads to the next round full of confidence after his double win at the first showdown round in Assen. It was his fourth double win of the season, wins 8 and 9 respectively from the last 11 races. At the moment no one seems able to live with him and the R1 Yamaha, making it difficult to see past him winning the championship.

Ellison will be going to Silverstone buoyed by the fact that he has signed to remain with the JG Speedfit team for 2016. He will be joined for the final two rounds by Motorpoint Supersport champion elect Luke Stapleford, following the recent departure of James Westmorland. Stapleford needs only three points at Silverstone to be assured of the Supersport title. Ellison, meanwhile, will have new parts available for the Kawasaki this weekend which he is hoping will help close the gap in pace to Brookes.

There is, however, the possibility that Brookes could wrap up the title this weekend – both Byrne and Ellison will need to be on their mettle to prevent that from happening.

Meanwhile the quest to win the Riders Cup for those not part of the Showdown looks set to go to the wire, with only eight points separating the top three of Richard Cooper, Stuart Easton and Luke Mossey respectively.

Unfortunately Easton will miss the Silverstone round as he continues his recovery from injury sustained earlier in the season. His place on the PBM Kawasaki will be taken by Be Wiser Kawasaki rider Danny Buchan after several impressive rides by the rookie, including two podium finishes at the recent Oulton Park round.

It is difficult to call who will eventually prevail, with the recent form of Cooper and Mossey being very similar. In many respects Cooper has had the more impressive results after his move from Kawasaki to BMW machinery, finishing well inside the top 10 on each of his seven starts for the Buildbase team.

The Showdown standings are:

With Luke Stapleford only needing three points to secure the Motorpoint British Supersport Championship it difficult to perceive him clinching the title Silverstone.

So certain is Stapleford of becoming champion that he has been drafted into the JG Speedfit Kawasaki superbike team for the remaining two rounds of the season. How he performs will be a good indicator of where he will be racing next season as the natural progression would be to move up to the bigger class.

Stapleford’s dominance has seen him win 11 from 20 races this season so far, including seven wins from the last 10 races. He also managed to finish on the podium in the other three.

The current Supersport standings are:

With Jonathen Rea confirmed as World Superbike champion at the last round in Spain, the main interest over the remaining two rounds in France and Qatar will be the fight for second place.

Ducati-mounted Chaz Davies currently has the advantage, on 353 points, 22 ahead of the 2013 champion and Rea’s team-mate, Tom Sykes. Should Sykes fail to secure second place it would be the first time since 2012 that he has finished outside of the top two places.

Regardless of which of them prevails, 2015 will go down as probably the best season to date in World Superbike for British riders, with it virtually guaranteed that British riders will occupy the top four places in the championship because Aprilia rider Leon Haslam is virtually assured of fourth place.

Rea, however, still has plenty to race for: the record points tally for a season of 552, set by Colin Edwards 13 years ago, is firmly in his sights. Regardless of whether that goal is achieved, it looks ocertain that Rea will become only the fourth rider to achieve more than 500 points in one season, joining Edwards, Troy Bayliss and Carlos Checa.

The current championship standings are: