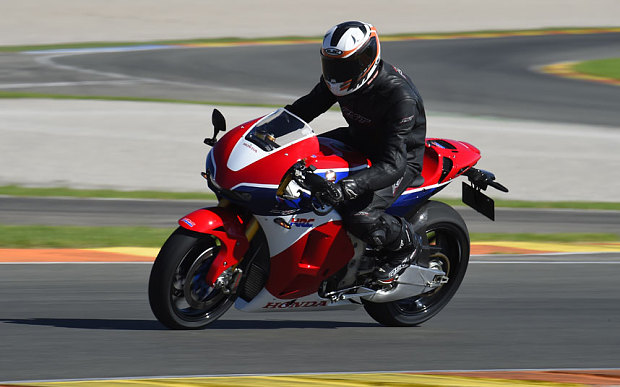 Before we get to the bike, let’s sort out the name. On paper, Honda’s latest, the RC213V-S, is the usual jumble of letters and numbers. But how do you say it? Not, as we all thought, RC Two One Three V-S. Rather, it’s “RC Twenty One, Three V-S”. That’s 21 for the century, and three because this is the third iteration of Honda’s Racing Corporation series. At £138,000, it’s also the world’s most expensive road-legal motorcycle.

In essence, the – let’s call is RCV from here on in – is a MotoGP replica for the road.

Rumours of such a machine had been circulating for years, and originally centred around the the V configuration five-cylinder bike. Honda was initially very guarded, before confirming plans in 2012, albeit centred around a V4 engine based on the 1,000cc RC213 MotoGP bike of that year. The same bike, incidentally, that in the hands of Marc Marquez won the MotoGP championship in 2013 and 2014.

The bike was born from a throwaway comment made at the Le Mans 24 Hour race, when at 3am Dave Hancock, head of product planning at Honda, was asked by Yoshituke Hasegawa, project leader, what the Japanese company needed to do to rekindle some excitement in its motorcycles. If Hancock’s response – to “take Marquez’s bike and put a number plate on it” – was clear, little did he know the seed that had just been sown.

So it was that months later, with little more than a throwaway comment at the bottom of an email, Hasegawa-san confirmed that Honda would indeed build the RCV. 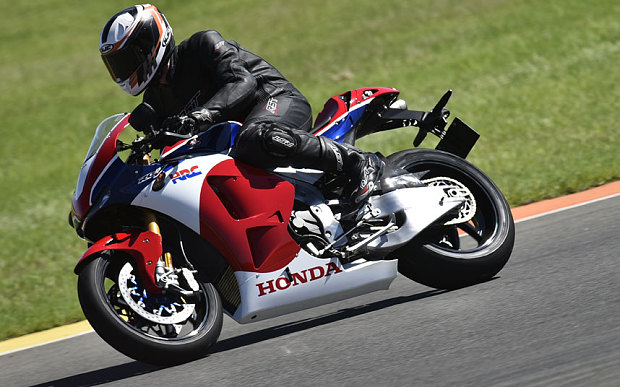 The bike may have been conceived in a pit lane garage, but to eager onlookers (and I include myself in that group), the gestation took place over the internet. And it seemed to take an age. It wasn’t until the end of 2014 that the public got its first glimpse of the bike, as Honda unveiled two concepts at the Milan show. Even then production was not confirmed.

Not everybody was bowled over by those concepts. Why weren’t they resplendent in Repsol orange? These were MotoGP replicas, after all.

Today, however, in the pit lane garage at the Valencia GP circuit, it’s a whole different story. Every inch of the bike oozes quality, purposefulness, and sheer beauty. One look isn’t enough, it draws you in again and again, with everything constructed from either metal or lightweight carbon-fibre. It is obvious that the bike is built for one purpose; to go fast.

The RCV’s stats at first sound underwhelming. Power stands at a modest 159bhp, which with a weight of 170kg gives a power-to-weight ratio similar to that of Suzuki’s GSXR750. But what the GSXR doesn’t have is the standard of componentry of the Honda, such as Ohlins suspension or Marchesini wheels, not to mention the kind of finish only a hand-built machine could have. Production is expected to be at the rate of one bike per day, which lags somewhat behind the 120 Fireblades Honda knocks out in the same space of time.

It may well prove to be the case that most RCVs will be bought to look at, rather than ride. But while I could happily stare at it all day, there is important work to be done here. Sitting astride the machine, it feels small for a 1,000cc sportsbike, particular in its narrow waist (a result of the V4 configuration). Even so, as a six-footer I found the bike comfortable, including the footrest position, which is six-way adjustable and didn’t feel too extreme.

The rider’s eye view of the cockpit is not normal, either. There is no ignition barrel cluttering the headstock area, the bike instead started with a push button arrangement which is armed by a remote fob (carbon-fibre, natch) carried about your person. 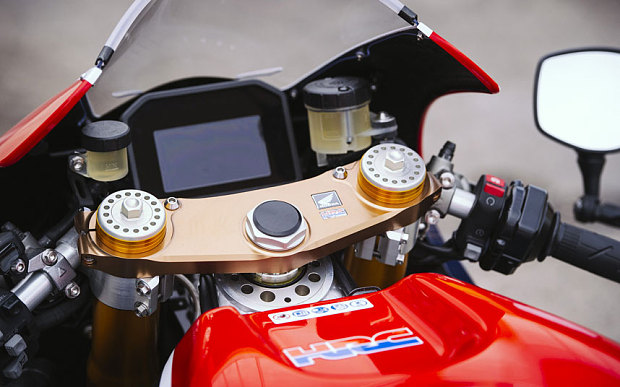 I will confess now that I am a relative novice as far as track riding goes, and so wasn’t sure quite what to expect from the Honda. However, price tag aside, I was amazed by just how civilised it is. It didn’t feel angry, as you might expect of a MotoGP replica, and nor was it twitchy or oversensitive. The engine is smooth, the suspension plush, and the brakes so powerful and predictable it just left me wanting more. I can’t think of another bike of this calibre that is as easy to ride.

The old cliché of the weight disappearing when on the move was seemingly coined for this RCV. It’s no coincidence; one of Honda’s goals was to make this the easiest bike in the world to manoeuvre, and it felt to me as though that had been achieved.

That was the more road-oriented version of the RCV. There’s also a 10kg lighter, full track-spec model, with a stealth plain carbon finish and upgraded titanium exhaust that made it look and sound every inch like a closed-season test bike. I decided to leave that one for the more experienced circuit riders. 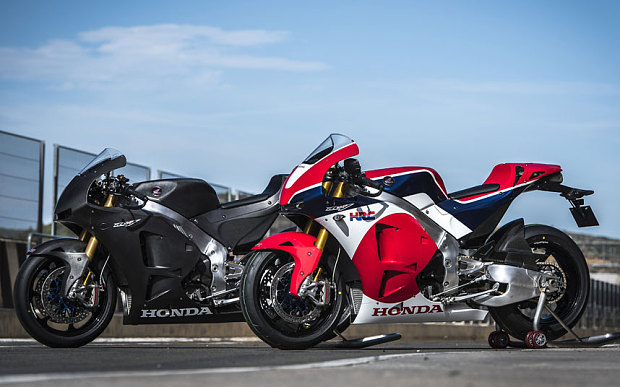 There’s no doubt that Honda is to be applauded for what it has achieved, as well as what the RCV stands for. Because it takes not only skill, but audacity to produce a bike like this, sticking as it does, two fingers up at the PC brigade.

For those of us with a more modest bank balances, it might sound like an irrelevance. But be in no doubt the day will come when the technology and engineering excellence of the RCV will find itself reproduced on far more humble machines. With any luck, they’ll also think of a more sensible name.

Verdict: Exotic, hand built perfection. Lightest and best handling 1000cc superbike outside of the MotoGP paddock. Flatters anyone who throws a leg over the saddle. Silky smooth V4 power