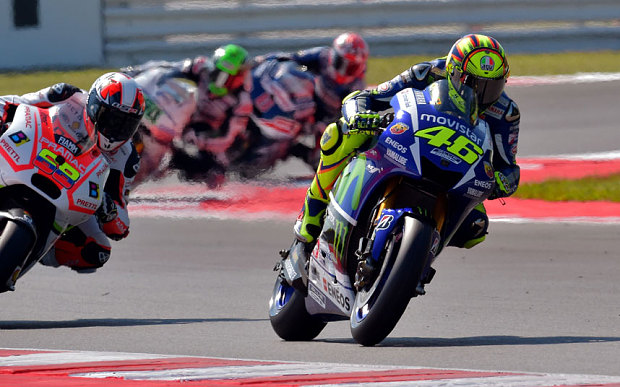 Valentino Rossi goes into his home GP at the Misano World Circuit in San Marino hoping to replicate his win in the last round at Silverstone.

Undoubtedly helped by the weather, Rossi stormed to victory at the British round, with Jorge Lorenzo having to settle for fourth place. Rossi now holds the advantage at the head of the championship from Lorenzo by 12 points.

The support at Misano will be partisan, with the overwhelming majority wanting and expecting a repeat of Rossi’s 2014 win at the circuit. Rossi’s birth place of Tevullia is only six miles from the circuit, which is now named in honour of the late Marco Simoncelli.

Lorenzo though will not be fazed by the support for Rossi, having won here 2011, 2012 and 2013. Indeed, since Misano’s return to the MotoGP calendar in 2007, Lorenzo has been more successful than any other rider, with four wins here in total.

Rossi and Lorenzo apart, it’s likely that the Honda pairing of Marc Marquez and Dani Pedrosa will be challenging at the front (Misano is one of only three circuits on the calendar where reigning champion Marquez is yet to win a MotoGP race).

There is, however, one big unknown this weekend: Misano has a new surface for 2015 and until practice starts no one will know for sure if this will cause problems for riders or machines alike.

Hopefully after his third place finish at Silverstone, albeit in the wet, Ducati rider Adrea Dovizioso will be able to consign his recent miserable results to history and again push at the front. Dovizioso and team-mate Andrea Iannone will also be guaranteed good support from the Ducatista, who will no doubt flock to the circuit in significant numbers.

Over in Moto2, Johann Zarco continues his dominance at the head of the standings, winning as he did in difficult conditions at Silverstone. Going into the Misano round he has an 85-point advantage over Alex Rins in second place. Zarco, who recently admitted to thinking about the championship, has been consistency personified this season with 11 podium finishes from the 12 races so far. In last year’s race he finished on the rostrum in third, his second of four rostrums in 2014.

Rins has won here for the last two years and will be hopeful again. He’s another rider in fine form, having finished his last four races on the podium, albeit behind Zarco on three of those occasions. As with MotoGP, no one knows quite what the change in surface will give us this weekend.

Going into the Silverstone round of the Moto3 championship, Britain’s Danny Kent had seen his lead reduced by 21 points in just two rounds. To the ill-informed onlooker it might seem like the onset of a crisis, but in reality Kent had merely been the unfortunate victim of circumstances.

However, it was his nearest title rival Enea Bastianini who suffered at the hands of the fickle British weather. Bastianini was one of 16 riders failing to finish the race, and the combination of Kent’s win and Bastianini’s DNF means that Kent now heads the championship by 70 points.

With all three riders who occupied last year’s podium places having graduated to either the Moto2 or MotoGP classes for this year, it’s difficult to predict what will happen at Misano. Kent will no doubt be battling for the win, though he is shrewd enough to have his eye on the bigger prize of the championship.