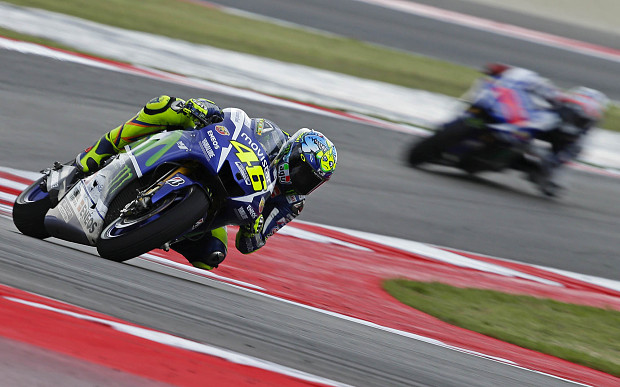 With four rounds remaining of the 2015 MotoGP season, the question of who will be crowned champion is dividing opinion of experts and fans alike.

The first of those four rounds, at Japans Motegi circuit, heralds the start of the three “fly aways”, at Motegi, Phillip Island (Australia), and Sepang (Malaysia), before the series returns to Europe for the final round in Valencia, Spain.

Yamaha teammates Valentino Rossi and Jorge Lorenzo are currently first and second in the standings with 263 and 249 points respectively. However, Lorenzo is undoubtedly the rider in the ascendancy at the moment, with superior pace to the rest of the field – something that Rossi himself readily acknowledges.

That said, with a history of mind games spanning his illustrious career, there is no doubt Rossi’s motives for this acknowledgement are not entirely gracious.

Lorenzo has actually been bettered by Rossi twice in the last three races, but in both, wet weather played a significant role. Rossi is widely held to be the master in wet conditions, while Lorenzo, by his own admission, lacks consistency when wet weather prevails. Significantly, as of writing, the weather forecast for the race day in Motegi is rain.

While the weather could well help determine the destination of the championship, two other riders may also have a significant say in the outcome. The last round at Aragon saw the real Dani Pedrosa step up to the plate and take the battle to the Yamahas after his Honda teammate Marc Marquez crashed out.

Though not able to match the pace of Lorenzo, he was triumphant in an epic end-of-race battle with Rossi for second place, meaning Rossi lost what could prove to be nine vital points to Lorenzo come the final reckoning.

In both 2013 and 2014, Lorenzo took victory at Motegi, with Rossi finishing fourth and third respectively. Rossi is no doubt practicing his rain dance in preparation for Sunday.

Meanwhile, Britain’s Bradley Smith is holding on to fifth place in the championship. He currently has a slender four-point lead over Ducati rider Andrea Dovizioso and a 14-point lead over Pedrosa. Smith is the firm favourite to finish as highest-placed non-factory rider.

Over in Moto2, Johann Zarco is now confirmed as the 2015 World Champion. Nearest rival Tito Rabat recently broke his left radius in a training accident and has withdrawn from this weekend’s race.

With Zarco currently holding a 78-point lead in the championship and only 75 points available after this weekend, Rabatt has effectively conceded.

In truth, it was likely that Zarco would have been crowned champion at Motegi, regardless. His performances this year make him a worthy winner; he has only finished outside the top three places in two of the 14 races to date.

Zarco has confirmed that next year he will continue to run the number five plate and forego the opportunity of taking the number one.

In Moto3, Danny Kent continues to head the championship from Enea Bastianini. The pair are currently on 234 and 179 points respectively.

Kent’s 55-point lead means it is possible for him to take the championship on Sunday should he score 21 points more than Bastianini. But even if he doesn’t, it is surely only a matter of time before Kent becomes Britain’s first GP World Champion since Barry Sheene in 1977.