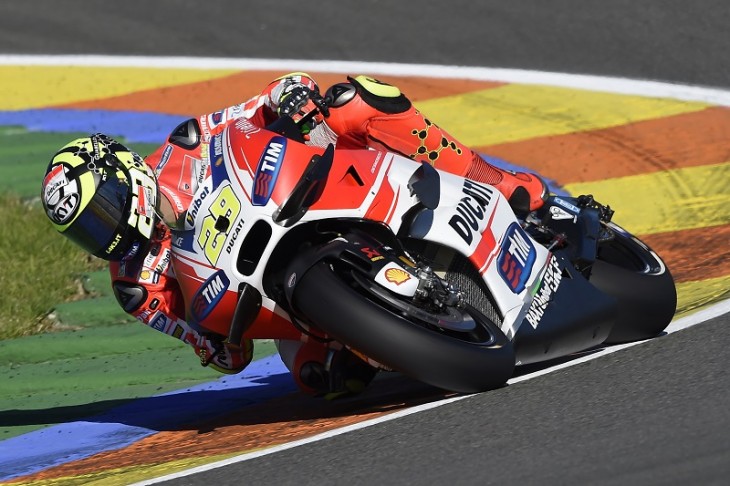 Winter testing got underway for MotoGP today, just two days after the end of this year’s championship. The Ducati Team took to the Valencia track with its two factory riders, Andrea Dovizioso and Andrea Iannone, aboard the Desmosedici GP machines they had raced on Sunday in the final round of the season.

On this first day of testing, both Ducati men mainly worked with their engineers to adapt the chassis set-up of their bikes to the 17” tyres made available by the new one-make championship supplier Michelin, while continuing to use the “factory” software.

Andrea Iannone, who had an unfortunate crash at Turn 3 towards the end of the session, completed a total of 61 laps, setting a best time of 1’31.639 and ending the day in a positive second place behind Marquez. His team-mate Andrea Dovizioso did a total of 66 laps, the Italian clocking a quickest time of 1’32.073 to finish tenth in the overall standings.

Also present at today’s test was Michele Pirro, the Ducati Test Team test-rider who finished twelfth in Sunday’s race. The Italian went out for a few laps on Iannone’s Desmosedici GP and will also remain at the disposal of the squad tomorrow.

“I think that today was a positive day, because we did a lot of laps and understood a lot of things, so it’s a good start. This is only the second time that I have tested the Michelin tyres and in the end I am quite satisfied because, even though we still have to work to optimize the details, I think that we have responded well to this important change. I’m sorry about the crash, but at the end of the session we made a modification that clearly did not work. Today the 2016 MotoGP season got underway and next year I expect to be up there fighting at the top with the best riders. I’m very confident and convinced I belong to a great group of guys.”

“These testing days are very important because this time the change is a really big one. The Michelin tyres have very different characteristics and so we also have to adapt our riding style, because the corner approach and the lines cannot be the same as the ones we were used to. For sure there is still a lot of work to do to adjust and understand the direction to take for the future, but it’s important to start off well and up at the front, and in any case first sensations are positive.”