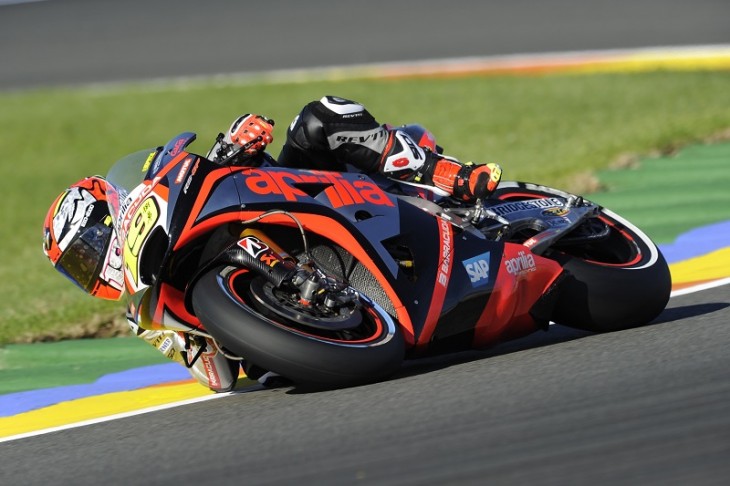 Valencia (Spain), 6 November 2015 – The first day of practice was one of ups and downs for the Aprilia riders at Valencia. In the first session both Bradl and Bautista took a good approach to the Spanish track, finishing FP1 respectively in 11th with 1’32,514 and 14th with 1’32,725. But neither one of them were able to improve in the second session, closing out the combined standings in 16th (Bradl) and 20th (Bautista).

However, both of the Aprilia Racing Team Gresini riders say they are confident that they’ll be able to resume fine tuning the RS-GP machines in the first session tomorrow since for both of them the afternoon session today was characterised by tests conducted on different solutions which did not provide any real advantages and, for Bradl, a technical problem.

“Overall this was a good Friday even if we missed the mark just at the end of FP2. When we needed to put a good time on the sheets both riders ran into something that slowed them down. For Alvaro it was simply a different chassis adjustment that didn’t provide the results we had hoped for, so that just means that we need to go back to the setup which worked before. Stefan, on the other hand, had a technical problem with engine brake management. But we had good feelings right from the start in the morning so we’ll have time tomorrow to improve.”

“After a good start in the first session this morning we had hoped to achieve something more in the afternoon. In any case we are working hard and we’re optimistic for tomorrow. In this last race we are still focused on the development work that we have been moving forward throughout the season and we would obviously like to finish with a good result. We’re confident. Tomorrow we’ll try to pick up where we left off in the best possible way.”

“We did well in the morning, even with our times and a good feeling. In the afternoon we worked on the bike to improve performance, especially going into turns, but I didn’t do as well as I had expected and we weren’t able to improve our times. Evidently the change we made was not effective, but that’s fine. It’s important to always have something new to try and in any case we have time to improve tomorrow.”

“In general the weekend started off well. I’m quite pleased with how the first free practice session went in the morning because we started from the setup we had used in Malaysia and everything worked well. In the afternoon the conditions were better to be able to try the harder front tyre and we also continued to do some tests with the soft rear to work on race pace. Unfortunately, however, in the last run we were slowed by a problem with the engine brake which cost us a few places in the combined standings for the two sessions. In any case I am optimistic for tomorrow. Once this problem is solved we’ll be able to be fast again.”