Harley-Davidson might be suffering a sales slump in most markets except Australia, but the iconic Yank is fighting back with some strong marketing campaigns including this award-waning short film.

Harley recently released its third-quarter sales results which were $US1.1 billion short of its own expectations, causing a drop in share prices, even though it still has more than 52% of the US domestic bike market.

The company has been hit at home and abroad by the high US dollar value and aggressive discounting by the Japanese competitors. And it’s only going to get worse with the US about to drop the 2.5% import duty on Japanese products, including motorcycles!

The one bright light on the horizon is Harley-Davidson Australia which is now the top-selling road bike company, pulling away from Honda and having the third and fourth best-selling bikes in the market – the Street 500 and Softail Breakout. 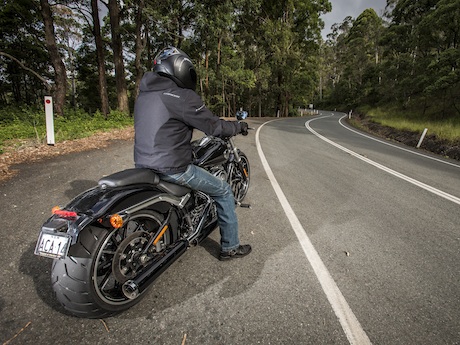 Harley-Davidson Breakout is one of their top sellers in Australia

But Harley is the king of marketing and this two-and-a-half-minute video from Germany is a prime example of how Harley appeals to inner emotions, lifestyle and branding.

It’s the no-dialogue story of a despondent worker who strives to reconnect with his “inner child” and find meaning in his dreary, white-collar life.

Along the way, he quits his job, hitchhikes, throws his suitcase off a cliff, is hounded by dogs, walks barefoot into the sea wearing his suit, burns his suit, dances in the moonlight, gets in a bar-room fight, wakes up bleeding on the side of a deserted highway and finally hits the road on a Harley after embracing his inner child. We’ve all been there!

It may be German, but it has universal appeal.